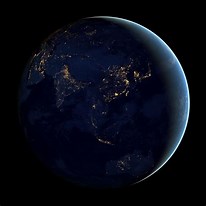 Godzilla stomped across our movie screens in the 1950s breathing fire while destroying Tokyo and its mass transit system. Godzilla was spawned of nuclear radiation released by the bombings of Hiroshima and Nagasaki. Making him, not monster but metaphor and the irony is, over dozens of pictures as the monster grew, and the metaphor shrank. In the 1950s & 60s nuclear annihilation was the great societal fear, in Japan it was a wound. Through cinematic mastery a guy in a rubber suit stomping on cardboard buildings in technicolor has become the oracle of our times. If we don't take care of the things we do to the world, we might unleash monsters from hell upon ourselves. Our tanks and planes and missiles and bombs are useless against Godzilla. Godzilla laughs then breaths fire. Don't say you weren't warned, Godzilla warned you!

Scientists recently split open a two-hundred-pound meteor found in Australia. Inside they found silica crystals dated to seven billion years old. In bible speak that's nearly six thousand years! This rock was whizzing across the universe while the Earth was a still a shapeless blob before Jesus learned to tie his shoes! The Earth changes and always changes and we are left trying to come to grips with a strategy to deal with a non-hospitable planet. Over a billion sea birds have died of starvation. It seems as the ocean waters warm the little fish they feed on, swim deeper to stay cooler. Don't tell me you saw that one coming.

That is the extrapolation of climate change. It's not the changes we can expect from a warming planet but the changes resulting from the changes. Mongolia has reinforced the roadbeds for its railroad across the tundra. Land frozen for thousands of years is now thawing threating a major line of transportation. If an Army did that, they'd be sh*tting bricks back at headquarters. But what will happen if the rains don't come? The land eventually dries out and becomes a desert making the roadbed untenable again. What happens if the rainfall is double the norm? The warming tundra becomes a mudflat, and the railroad is toast.

Related Topic(s): Birds; Earth Day; Earth Moon; Earth Policy Institute; Earthquake; Earthquakes; Godzilla; Jesus; Metaphor; Monster; (more...) Nagasaki; Radiation; Water, Add Tags  (less...)
Add to My Group(s)
Go To Commenting
The views expressed herein are the sole responsibility of the author and do not necessarily reflect those of this website or its editors.