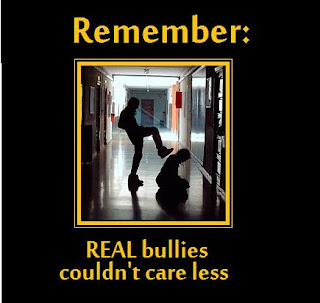 "I wouldn't care if you died. No one would. So just do it It would make everyone WAY more happier!"

We'll hear from the sacred cows in just a few hours (this being written at 3:00AM PDT). We'll hear how THEY would have prevented Jamey Rodemeyer's death. His parents, however, think differently: they actually worked with the school to try and stop the bullying - to no avail. Saving Jamey was almost too dauntless a task for any one entity. It would have taken a whole community to stop the bullying, and an even greater number to shore up Jamey's self-esteem. The bullying was too relentless, and it took the form of unabashed lies:

"JAMIE IS STUPID, GAY, FAT AND UGLY. HE MUST DIE!"

This is a picture of Jamey Rodemeyer: Perhaps the stark contrast coming from this situation is with those who absolutely refuse to have any gay sensitivity awareness or real anti-bullying presentations in schools because they think that their true purpose is "indoctrination."

From a pamphlet distributed by Family Research Council:

This pamphlet describes how pro-homosexual activists work their way up from seemingly innocent-sounding "safe schools" programs (which treat traditional values as being equivalent to racism), to one-sided "training" of teachers and students, to injecting homosexuality into every subject in the curriculum. Their final step is the active punishment of those who dare to express disapproval of homosexual behavior. This pamphlet will equip you to oppose this promotion of homosexuality in your child's school.

After reading this, it's no wonder that Tony Perkins of the FRC actually stated that his own group of  "social conservatives" were not in any way responsible for teen suicides. Obliterating religion's role in suicides for the last thousand years was quite a feat ... of hysterical stupidity, but Perkins pulled it off effortlessly.

Bullying as a Traditional Value


Isn't it possible that in prohibiting teachers and administrators from teaching that "homosexuality is normal" that  "traditional values" zealots just as forcefully send the message that bullying is "normal"? After all, bullies have been around for millennia ... just like marriage. The harm bullies do might be considered, in fact, totally inconsequential: young teens who might consider themselves gay certainly deserve the taunting they get, and who cares if they commit suicide? ALL gays are psychologically tortured because that's part of being gay! Bullies are just being normal boys. Girls are never bullies.
The disingenuous statement that "Of course, we're concerned about the welfare of ALL our children against bullying" will undoubtedly be bandied about this time, but this time it may seem utterly rancid: a larger effort to stop bullying in that particular school district (Jamey was not the first bully-suicide) could have at least diminished the efforts of the bullies, but through sheer thoughtlessness and lack of compassion, the bullying went unabated. This time, the school was not at fault as much as the community at large, a community perhaps fueled by righteousness: with a town that celebrates Old Home Days, it is perhaps steeped in genteel poverty (the per capita income hovers just above the poverty line) and its population of only 6,000 (97% white) supports a major Catholic church and five private Christian schools.
Looking back at it, Jamey never had a chance.

I just wanna say good bye, disappear with no one knowing

I don't wanna live this lie, smiling to the world unknowing

I dont want you to try, you've done enough to keep me going

Jamey Rodemeyer's life will be remembered by those who loved him:

Olivia Rinaldo, an eighth-grader at Heim Middle School, said she was drawn to his outwardly upbeat and extroverted personality. He made friends of the friendless, she said.

But his suicide will be discarded in memory by those bullies who just couldn't care less.

Rev. Dan Vojir is has been writing/blogging on religion and politics for the better part of ten years. A former radio talk show host (Strictly Books " Talk America Radio Network) and book publisher, Dan has connected with some of the most (more...)
Related Topic(s): Bullying; Family Research Council; Formspring; Gay Bashing; Gay Lesbian Rights; Gay Rights; Jamey Rodemeyer; Suicide-prevention; Tony Perkins, Add Tags
Add to My Group(s)
Go To Commenting
The views expressed herein are the sole responsibility of the author and do not necessarily reflect those of this website or its editors.