The people of Upper Darby, PA are wondering what led John Joe Thomas to bludgeon to death a man   who, from all accounts, thought of him as a trusted and close friend: mental instability? Gay panic? Money? "Voices"? The Bible? The video below doesn't really say much. In fact, what it doesn't say speaks volumes. All there is to know now is: 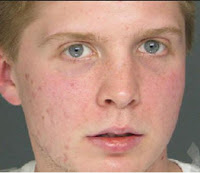 Murrary Seidman, 70, was a man born with brain damage who amazed doctors at his ability to live and maintain employment - enough to retire from his job as a worker at a psychiatric hospital. He met John Joe Thomas while Thomas was being treated at the same hospital. The two men spent a lot of time together, Thomas visiting Seidman in his apartment as often as every a day. Seidman liked and trusted Thomas enough to make him a beneficiary of his will as well as give him power of attorney.

Thomas reported to police that he had discovered Seidman's body in his apartment, but could not go in with them because of "all the blood." While being held on separate charges of public lewdness and disorderly conduct (in another, unrelated case), police received testimony from a witness who said that Thomas had confessed to killing a man. He described how he had put batteries and a rock in a sock and hit Seidman at least 10 times. When arrested, Thomas told police that his "prayers" told him that Seidman needed to be punished by stoning him to death because Sediman had for a time been making homosexual advances and the Bible said that "homosexuals should be stoned to death."

The Bible and the mentally ill: it's not exactly as I've written before, that clergy have a habit of "keeping them clueless," but the cause is still the same - demonizing. Demonizing someone - anyone - has a much more lasting effect than its antidote - love. Demonizing has taken its toll in millions of untold stories: hatred, revenge, jealousy, righteous assassination and suicide. The "Blood Libel" against the Jews caused casualties we can only begin to fathom. John Joe Thomas' "prayers" told him to kill Murray Seidman, but who/what caused the "prayers" to be real in the mind of Thomas? The Bible alone? Or someone who told him what the Bible "says"? It's important to look at the details of this case (such as they are): the explicit chapter and verses in Leviticus do not immediately mete out punishments with stoning, only stating that "they shall be put to death." Thomas probably could not have put together the ideas of "put to death" and "stoning" by himself. The portmanteau ideology had to come from somewhere other than Thomas' Bible.

So this situation presents an interesting case for "righteous assassination": instead of the media, we might actually be able to narrow the cause down to a small group of people - or to even one person ... or pastor.

If the case plays out more in the media, the Right will automatically say "we aren't responsible for every mentally disturbed murder," just as they have in the shooting of Gabrielle Giffords. But if the defense digs deeply into all the other relationships in John Joe Thomas' life, they might be able to point to more than just the Bible and "prayers."

The Alliance Defense Fund might step up to the plate not only to defend John Joe Thomas, but to shield to whomever his thoughts of righteousness might be traced.

Rev. Dan Vojir is has been writing/blogging on religion and politics for the better part of ten years. A former radio talk show host (Strictly Books " Talk America Radio Network) and book publisher, Dan has connected with some of the most (more...)
Related Topic(s): Bible And Politics; Christian Right; Demonizing; Hatred; Homophobia; Homosexuality; Mental Illness; Righteous Assassination; Stoning, Add Tags
Add to My Group(s)
Go To Commenting
The views expressed herein are the sole responsibility of the author and do not necessarily reflect those of this website or its editors.