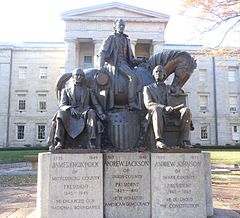 North Carolina has become one of the most contestable states in electoral politics. Obama won it in the 2008 general election by less than ½%, only to lose it to Mitt Romney in 2012. Hillary's vote totals were higher than Obama's ever were, yet Trump beat her by a margin of 3.66 percent. In 2016, the challenger for governor, Roy Cooper, narrowly defeated the Republican incumbent. Performance in the state may be artificially deflated thanks to the Republican-controlled legislature's efforts to suppress minority vote through gerrymandering.

The results of the NC primary will explain which type of voter can help the Democrats win the state. Is it those who do not usually participate in the political process but are inspired by a candidate offering a transformative vision? Is it someone who's already a voter that they can lure away? As someone who worked on a Democratic campaign in 2016 and through that experience, got to watch Hillary Clinton's state-level campaign work up close, Democrats want that hypothetical voter to be "undecided" or straight-up GOP. This has to do with Democrats' lack of imagination, but part to do with math. By turning a Trump supporter into a Democrat, you've taken a vote away from Trump; if you convince someone who doesn't usually vote to vote for your candidate, you've only increased your vote margin by one.

NC is a growing state; its electorate is a black box right now. According to Carolina Population Center at the University of NC-Chapel Hill, the state has added a 1.1 million registered voters since 2016; unaffiliated voters here have increased from 29 to 43%. The percentage of registered Democrats has declined from 39 to 30, and registered Republicans dropped from 32% of voters down to 26. NC's Democratic primary offers same-day registration to early voters, meaning that no matter what your political affiliation, if you are of voting age living in the state, you go to your polling place, register as a Democrat, and vote in the primary right now.

It is possible that Bloomberg, who is essentially campaigning on a platform of, "Biden, Buttigieg, and Klobuchar are all gonna f--k this up, right?" appeals to those unaffiliated voters, as well as older, more moderate Democrats and Republicans who aren't super pumped on Trump. These voters, the moderate and/or truly undecided, exist; it's a question of how many there are, and if they prefer Bloomberg, another racist billionaire with autocratic tendencies, over Sanders, a self-declared Democratic Socialist whom Democratic insiders fear will cause the party's down-ballot candidates to lose.

The rationale for anti-Sanders arguments is that because Sanders calls himself a socialist, Trump and his partisans will claim that Sanders' presidency would turn the United States into a communist dictatorship. Trump accuses centrist Democrats of being socialists, while the racist Fox News talking head and pro-Trump blogger Pamela Geller compared Speaker of the House Nancy Pelosi to Pol Pot 2 weeks ago; this is going to happen no matter who's at the ticket top.

Thousands of supporters of Bernie Sanders have packed the Craneway Pavilion at Ford Point for a campaign rally in Richmond, California, to hear a long list of activists and elected officials, including actor Danny Glover, San Francisco District Attorney Chesa Boudin, and state assembly member Ash Kalra. "So, let's be clear. The billionaires are the cause, and not the solution to the moral crisis," Kalra told the crowd. "We must make it clear, once and for all, to all the billionaires that our democracy does not belong to them" Our democracy belongs to we the people."

Related Topic(s): Bernie Sanders 2020; Nevada Primary 2020; Virginia 2020 Primary, Add Tags
Add to My Group(s)
Go To Commenting
The views expressed herein are the sole responsibility of the author and do not necessarily reflect those of this website or its editors.