Editor's note: Kathy Kelly, a co-founder of Voices in the Wilderness, renamed Voices for Creative Nonviolence, is a peace activist who, from the start of the first Gulf War in 1991, has traveled to U.S. war zones. From Baghdad and Basra in Iraq to Kabul in Afghanistan, she sought to bridge the language of enemies and counter the violence with personal witness, often writing accounts that countered the misleading appraisals of U.S. officials. In light of the recent release of the Afghanistan Papers, NCR asked if she would reflect on her experience of America's "forever wars."

The 2003 "shock and awe" bombing of Iraq had finally stopped. From the balcony of my room in Baghdad's Al Fanar Hotel, I watched U.S. Marines moving between their jeeps, armored personnel carriers, and Humvees. They had occupied the street immediately in front of the small, family-owned hotel where our Iraq Peace Team had been living for the past six months. Looking upward, a U.S. Marine could see enlarged vinyl photos of beautiful Iraqi children strung across balconies of our fifth-floor rooms. We silently stood on those balconies when the U.S. Marines arrived in Baghdad, holding signs that said "War = Terror" and "Courage for Peace, Not for War." When she first saw the Marine's faces, Cynthia Banas commented on how young and tired they seemed. Wearing her "War Is Not the Answer" T-shirt, she headed down the stairs to offer them bottled water.

From my balcony, I saw Cathy Breen, also a member of the Iraq Peace Team, kneeling on a large canvas artwork entrusted to us by friends from South Korea. It depicts people suffering from war. Above the people, like a sinister cloud, is a massive heap of weapons. We unrolled it the day the Marines arrived and began to "occupy" this space. Marines carefully avoided driving vehicles over it. Sometimes they would converse with us. Below, Cathy read from a small booklet of daily Scripture passages. A U.S. Marine approached her, knelt down, and apparently asked to pray with her. He placed his hands in hers.

April Hurley, of our team, is a doctor. She was greatly needed in the emergency room of a nearby hospital during the bombing. Drivers would only take her there if she was accompanied by someone they had known for a long time, and so I generally accompanied her. I'd often sit on a bench outside the emergency room while traumatized civilians rushed in with wounded and maimed survivors of the terrifying U.S. aerial bombings. When possible, Cathy Breen and I would take notes at the bedsides of patients, including children, whose bodies had been ripped apart by U.S. bombs.

The ER scenes were gruesome, bloody and utterly tragic. Yet no less unbearable and incomprehensible were the eerily quiet wards we had visited during trips to Iraq from 1996 to 2003, when Voices in the Wilderness had organized 70 delegations to defy the economic sanctions by bringing medicines and medical relief supplies to hospitals in Iraq. Across the country, Iraqi doctors told us the economic war was far worse than even the 1991 Desert Storm bombing.

In pediatrics wards, we saw infants and toddlers whose bodies were wasted from gastrointestinal diseases, cancers, respiratory infections and starvation. Limp, miserable, sometimes gasping for breath, they lay in the arms of their sorrowful mothers, and seemingly no one could stop the U.S. from punishing them to death. "Why?" mothers murmured. Sanctions forbade Iraq to sell its oil. Without oil revenues, how could they purchase desperately needed goods? Iraq's infrastructure continued to crumble; hospitals became surreal symbols of cruelty where doctors and nurses, bereft of medicines and supplies, couldn't heal their patients or ease their agonies.

In 1995, UN officials estimated that economic sanctions had directly contributed to the deaths of at least a half-million Iraqi children, under age 5. 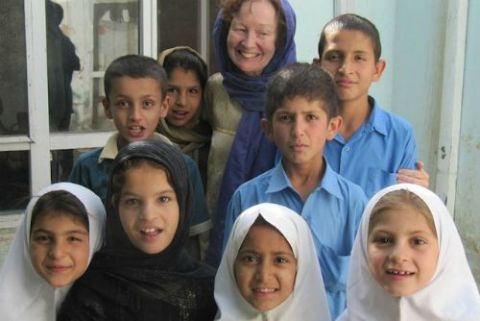 The economic war continued for nearly 13 harsh and horrible years.

Shortly after the Marines arrived outside of our hotel, we began hearing ominous reports of potential humanitarian crises developing in Baghdad and other major Iraqi cities. A woman who had been in charge of food distribution for her neighborhood, under the "Oil for Food" program, showed us her carefully maintained ledger books and angrily asked how all who had depended on the monthly food basket would now feed their families. Along with food shortages, we heard alarming reports about contaminated water and a possible outbreak of cholera in Basra and Hilla. For weeks, there had been no trash removal. Bombed electrical plants and sanitation facilities had yet to be restored. Iraqis who could help restore the broken infrastructure couldn't make it through multiple check points to reach their offices; with communication centers bombed, they couldn't contact colleagues. If the U.S. military hadn't yet devised a plan for emergency relief, why not temporarily entrust projects to U.N. agencies with long experience of organizing food distribution and health care delivery?

Cathy, who is a nurse, Dr. April Hurley, and Ramzi Kysia, also a member of our group, arranged a meeting with the civil and military operations center, located in the Palestine Hotel, across the street from us. An official there dismissed them as people who didn't belong there. Before telling them to leave, he did accept a list of our concerns, written on Voices in the Wilderness stationery.

The logo for our stationery reappeared a few hours later, at the entrance to the Palestine Hotel. It was taped to the flap of a cardboard box. Surrounding the logo were seven silver bullets. Written in ball-point pen on the cardboard was a message: "Keep Out."

Kathy Kelly holds Shoba at the Chamin-E-Babrak refugee camp in Kabul, Afghanistan, in January 2014, a few days after the child had been saved from a burning tent, during a fire that destroyed much of the camp.
(Image by (Abdulhai Darya))   Details   DMCA

Related Topic(s): Children; Cruelty; Death; Drone; Horror; Iraq; Military; Pentagon; Wars, Add Tags
Add to My Group(s)
Go To Commenting
The views expressed herein are the sole responsibility of the author and do not necessarily reflect those of this website or its editors.