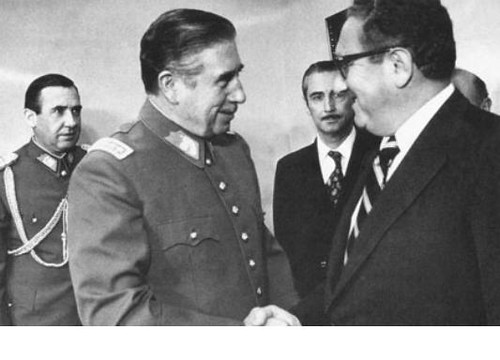 I find it chillingly intriguing that at the same historical moment when the U.S. empire had installed Pinochet in Chile to join Latin America's other brutal CIA-created dictators, the empire was applying many of its violently repressive neo-colonial tactics from abroad to its internal neo-colonial projects. I'm talking about the regime that was in place within the Pine Ridge Indian Reservation from 1972 to 1976, wherein the tribal chairman Dick Wilson carried out paramilitary murders and political intimidation on behalf of the U.S. empire.

Wilson's private militia, the "Guardians of the Oglala Nation," was used as an armed force within the Native community, one which worked in tandem with the federal armed forces in their effort to defeat the 1973 occupation of the area by Native resistance forces. After the occupation ended, Wilson's "GOONs" killed over sixty people on the reservation as part of the campaign to crush the American Indian Movement, as well as carried out campaigns of harassment and violent intimidation against disfavored individuals within the tribe. The goal of this, along with the assault and arson from the GOONs, was to create a climate of fear and intimidation where anyone who might resist the United States was killed or terrorized into submission.

This was the tactic that the empire used during this time when it was experiencing rebellions from the victims of its neo-colonial projects, both abroad and within U.S. borders: prop up regimes that will enact reigns of terror against the population as punishment for their disloyalty. It was like Wilson and his FBI backers had created their own little Pinochet dictatorship, born from the same type of capitalist and colonial reaction that had spawned the one in Chile.

In this time when the contradictions of capitalism and imperialism are drastically driving down the living standards of the U.S. population, and when the moment is becoming ripe for new attempts at anti-capitalist and anti-colonial revolt, those reactive trends which produced neo-colonialism's 20th century era of dictatorship are coming back. The empire is getting ready to carry out a new great outburst of internal violence against those who dare to challenge it, with the police militarization and Gestapo tactics of recent years being just a warm-up. On the country's horizon is an equivalent of the Pinochet regime in Washington, with more Dick Wilsons likely to appear within the sovereign tribal territories.

Upon looking at how imperialism reacted to revolts during the 70s, it makes sense that such a dystopian scenario will come about because of the revolts that U.S. anti-capitalists and anti-colonialists plan to attempt in the near future. Radical indigenous, black, and generally proletarian organizations are looking at how the empire is imploding in on itself, and they're talking of waging a people's war against the tyrannical U.S. regime within our generation. But with these hopeful murmurings has come the recognition of the crucial caveat: that if we try to free ourselves from the empire, the empire will crack down with the same brutality that it's applied all the past times when it's been threatened.

"What do we do when social media bans anti-capitalists and anti-colonialists?" wrote the Indigenous Anarchist Federation two months ago. "What do we do when our cell phones fully become monitoring devices we willingly keep by our side, all to the benefit of state intelligence services? What happens when our cell phone numbers are blocked from service? How will the revolutionaries continue to communicate locally, regionally, and internationally?" These kinds of drastic and alarming changes to our daily lives are being very seriously contemplated by today's U.S. radicals, because history tells us that we have every reason to expect them to happen.

The solution from the Indigenous Anarchist Federation article reflects the solution that intuitively comes to one's mind: a combination of waging a war of attrition against the state, and utilizing survival tactics. Don't despair, because there are chinks in the U.S. repressive state's armor; it's clear that the U.S. military wouldn't be able to defeat strong urban guerrilla groups through special ops forces alone, and that if the military were to try to deal with the insurgents through carpet bombing it would cripple American capitalism's internal productive capacity. So if we equip ourselves with the proper tools for defending against a government counterinsurgency, we'll have a chance at victory. But for the most part, those of us who set ourselves up against the empire will have to simply focus on surviving in the coming decades.

When America's own Pinochet comes to power in 2024, 2028, or sometime later (no doubt with help from the liberal faction's efforts to build up the police and surveillance states), we'll have to adopt the kind of lifestyle that Che's forces did during their battle against Cuba's Batista dictatorship. Unless we can manage to flee the country, we'll have to apply the same methods that Che used: hiding out in the woods and in mountainous areas, creating camps whose members can take care of their own bodily needs and watch out for potential outside threats, carrying out sabotage against the enemy's infrastructure and bases of operations. The alternative will be getting imprisoned, tortured, or killed by the state.

This is the horror that we'll be faced with when the U.S. reactionary ideology reaches its logical conclusion. A large base of support for such a regime very much exists in the United States, as has been shown by Americans' mass indifference towards the Trump's administration's human rights abuses against detained refugees. This complacency in the face of the indefensible mirrors what happened in Chile, as is explained by the article Watching 2001's "I Love Pinochet" Documentary, in Trump's 2020: "The Pinochet regime lasted nearly two decades thanks to the Chileans who actively supported him while aware of his crimes; thanks to those who believed without question the government propaganda spread through the TV, newspaper, and radio; and thanks to those who preferred to keep their heads down and not get involved."

For the millions who would support an American version of Pinochet, the social incentive comes from their desire-realistic or not-to continue benefiting from the spoils of U.S. imperialism. "Make America Great Again" embodies this desire. The country's declining economic conditions haven't purely led to an increase in class consciousness, because class and anti-imperialist solidarity aren't incentivized by our selfish and individualistic capitalist culture. Instead of turning towards revolutionary socialism, many are turning to the dark side, the side which tells them that an intensification of imperialism and a greater exploitation of those socially below them will bring back prosperity. This will be the marketing ploy of the future proto-fascists and outright fascists: if the undesirables are killed off or enslaved, those within the favored class will remain secure as a protected aristocracy.

Of course, 21st century capitalism's reality of ever-widening inequality won't let this promise match up with the actual conditions, even for most of the white U.S. population. And the colonized peoples will be ready to lead the war for liberation against the regime, since oppression from this regime has for them always been the most severe. Under these circumstances, tyranny won't be able to prevail.

Related Topic(s): Capitalism; Class; Government; Military; Militia; Pinochet; Police; State, Add Tags
Add to My Group(s)
Go To Commenting
The views expressed herein are the sole responsibility of the author and do not necessarily reflect those of this website or its editors.