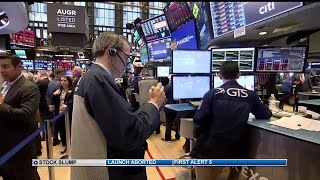 While Dow plunges, expert says don't panic On Thursday the Dow took a plunge for the second straight day, down more than 1300 points in just 48 hours.
(Image by YouTube, Channel: KOAA 5)   Details   DMCA

There's a sort of eerie quiet that's come about. Why?

Well the Kavanaugh circus has ended with his not unexpected confirmation to SCOTUS by the Republican controlled Senate. Despite legitimate progressive worries it still remains to be seen what his replacing Justice Anthony Kennedy will actually have on the Court's decisions.

The "news", at least from the corporate MSM, obsessed as they are with the disappearance of Saudi journalist Jamal Khashoggi-who has been critical of Saudi Crown Prince Mohammad bin Salmon-reportedly missing, murdered, his body dismembered while in the Saudi Consulate in Istanbul, Turkey. Trump on CBS "60 Minutes" said Saudi Arabia could receive "severe punishment" if Khashoggi was killed. Don't bet on it.

In Syria the 12.4 mile demilitarized zone around Idlib Province supposedly to be manned and patrolled jointly by Russian/Turkish military as of yesterday October 15 is apparently holding, although mortars were reportedly fired from within the zone by jihadist mercenaries on October 13 killing two Syrian Arab Army soldiers in neighboring Hama Province. Too early to tell if the plan will hold.

Gaza Palestinian's at the border fence with Israel continue protesting their right to return to their homes and villages when their families were expelled 70 years ago when Israel was established in 1948. Since March hundreds of Palestinian's have been killed by Israeli Defense Forces protesting at the border fence. Ever since Hamas won the election in 2007 giving them legal government control of the Gaza enclave Israel has refused to negotiate with them creating the existing open air prison that constitutes Gaza. But Gaza hardly gets mentioned in MSM "news" and if it does favors Israel's "right to defend itself"-even though the IDF snipers kill Palestinian's with impunity-so what else is new.

Bin Salmon's Saudi war of aggression continues against the Houthi's in Yemen with US complicity of course but this war flies mostly under the radar here in the US-though the killing of some 40 children in a school bus did receive attention it became old news within a few days.

There was an incident in the South China Sea where a US Naval destroyer-sailing under the phony "freedom of navigation" banner-almost collided with a Chinese warship but was soon driven off by the latter. The South China Sea is China's backyard and they won't be intimidated by US "gunboat diplomacy". But as usual CNN made China the belligerent. Potentially big trouble in the making here with US provocations almost sure to continue.

The EU is trying to keep the Iran nuclear deal in place by protecting companies in Europe from receiving secondary sanctions from the US when they conduct oil trade with Iran by using the Euro in financial transactions with Iran instead of the dollar. Trump has set November 4th as the date new oil sanctions against Iran are to begin intending to keep Iran from selling any of its oil. That won't work of course regardless whether the EU caves under US pressure as China, Russia, India have no intention of not accepting Iranian oil. Russia just signed a deal to accept Iranian crude that will be processed by Russian refineries. China is the main recipient of Iranian oil and India says the US has no business interfering with India/Iran trade relations. Yet once the US oil sanctions on Iran kick in less than three weeks who knows what might happen.

The November congressional elections are three weeks away yet there seems no clear winner for the House/Senate sweepstakes-ah majority in either assembly. The Kavanaugh confirmation brouhaha seemingly not breaking either way for the Repubs or the Dems.

The DOW took a 1300 point plunge last Thursday but whether that's a harbinger of worse things to come-say a crash of an overheated, overvalued stock market...who's to say.

Trump just visited the Florida panhandle "surveying" the damage from Hurricane Michael. That's what presidents do after some natural catastrophe happens. When asked by a reporter if climate change had anything to do with the devastation Trump responded, "There is something there". Hmm. Is he gaining awareness or was it just seeing the devastation and talking to some residents who were in the direct path of the hurricane? This was just a temporary lapse from the "Donald". He like the rest of his corporate oligarch brethren see only money and power.

There's a women's march on the Pentagon scheduled for this Saturday and Sunday. It's the 17th anniversary of "Dubya" Bush invading Afghanistan under the pretext of going after Osama bin Laden who at the time was accused of being the terrorist mastermind we were told was behind 9/11. But with scientific evidence now revealed that "official" narrative of the events that day may be the real conspiracy theory.

I wonder if the women protesting at the Pentagon will highlight the holes in the "official" 9/11 narrative- that Bush used to initiate the global war on terror-or just shy away?

Retired. The author of "DECEIT AND EXCESS IN AMERICA, HOW THE MONEYED INTERESTS HAVE STOLEN AMERICA AND HOW WE CAN GET IT BACK", Authorhouse, 2009
Related Topic(s): Iran; Money; NYSE; Oil; Provocation; Sanctions; Trade, Add Tags
Add to My Group(s)
Go To Commenting
The views expressed herein are the sole responsibility of the author and do not necessarily reflect those of this website or its editors.