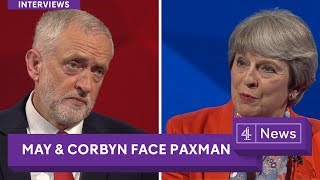 Thursday June 8th could be a key moment in British history, even have worldwide implications as the people go to the polls and vote for a new prime minister of Great Britain.

In Britain the people don't vote directly for prime minister they vote for their own MP's-members of parliament to represent them from their "constituencies" in the House of Commons- similar to the congressional districts in the US. If the party each MP represents reaches a 326 seat majority threshold that parties leader becomes prime minister.

However if no party reaches that 326 seat threshold a coalition with other parties must come together to form a new government with the new prime minister most likely being from the party with the most seats.

Most interestingly, if the Conservatives don't reach that 326 majority seat threshold and Jeremy Corbyn, the leader of the Labour Party and MP's of his party are elected and come in a close second in the voting he could attempt to form a new coalition government himself aligning with members of other minority parties.

Without getting too complicated with the British system May called for this new election-called a "snap election"- in April believing her party would garner even more seats and give her a sort of mandate rather than simply replacing David Cameron as Conservative party PM after he resigned suddenly as PM in June 2016.

That decision may-no pun intended-have cost her. Apparently she's a terrible campaigner, comes across as stiff and in polls is disliked by a majority of the people. Then last week she refused to debate Corbyn after a terrorist bombing in London. Meanwhile Corbyn comes across as more human, curmudgeonly old who can relate to the people's concerns.

If Corbyn, and it's a big if, should become prime minister it would be an earthquake in US British relations as he's made it clear it's not in British interests to always follow the US lead in war often citing former British Prime Minister Tony Blair's wrongful decision joining with George "Dubya" Bush invading Iraq in March 2003.

That decision has been clearly understood by the people in Britain as disastrous with blowback in the form of Islamic terrorism coming directly into Britain.

With Britain following every US misadventure whether it be Iraq, Afghanistan, Libya, Syria creating a massive refugee crisis coming from those countries into Europe-which is certainly not received well by the people in Europe including Britain even though it was these unnecessary US/British/European led wars of choice in those Islamic countries that created the refugee crisis .

With Corbyn as PM the US and British elite led neo-liberal economic policies would be attacked as harmful to the people what with the harsh austerity measures they bring, high unemployment, decline of the unions, reduced pensions, reduction in the social welfare safety net, cuts in the universal health care system, a low minimum wage and further decimation of the middle working class-as now happening in the US- revealing the great disparity in wealth between the 1% and the 99% in Britain as well as the US.

Corbyn wants the equivalent of a $15 minimum wage, re-nationalization of public utilities, increased taxes on the richest 5% to cover it all including fully funding the health care system, free publicly funded education through university, guaranteed pensions and no unpaid apprenticeships. With May none of these measures would likely be passed much less enacted.

Retired. The author of "DECEIT AND EXCESS IN AMERICA, HOW THE MONEYED INTERESTS HAVE STOLEN AMERICA AND HOW WE CAN GET IT BACK", Authorhouse, 2009
Related Topic(s): British Snap Election, Add Tags
Add to My Group(s)
Go To Commenting
The views expressed herein are the sole responsibility of the author and do not necessarily reflect those of this website or its editors.