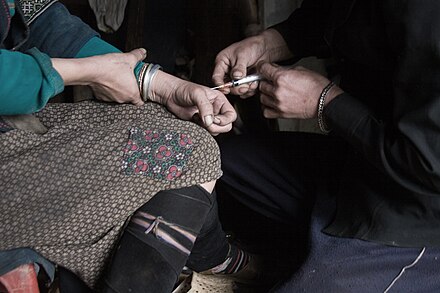 Suggested change: A person addicted to heroin, rather than a heroin addict. It's a matter of labels and stigma and barriers to recovery.
(Image by (Not Known) Wikipedia (commons.wikimedia.org), Author: Author Not Given)   Details   Source   DMCA

What's in a name? Maybe, recovery.

Addiction to opioids, alcohol, heroin, other substances or behavior is a medically recognized disease, something for which treatment is available and prescribed so that the person who suffers from it can be returned as a contributing member of society. That's the official, appropriately concerned line put forth by government agencies, the medical community and those who work in the field.

Unofficially, which is to say, to much of society including members of the aforementioned groups, a person with the disease of addiction is commonly referred to as an addict. A drunk. A junkie. A cokehead or crackhead. An alkie. A pothead. A pill-popper. He or she is often regarded as someone who is weak-willed, immoral, untrustworthy, rather than someone suffering from a disease. A liar. A loser. Someone not worth the time or effort or money to associate with, never mind help.

One of the major obstacles to persons seeking treatment for addiction is the stigma attached to the disease. It has been framed seemingly forever as a moral issue, a crime issue. Rarely only recently has it been framed as a health issue. We have waged a war on drugs as we tried to cure cancer or diabetes.

Researchers at the University of Pennsylvania lbast year released a study with the key recommendation to stop using the words "addict," "alcoholic" and "substance abuser." The study found the words carry a strong negative bias. Basically, the researchers said, they label the person, not the disease. Study participants not only displayed a reluctance to associate with persons described with those words in fictional vignettes, the researchers said participants also displayed "implicit bias" to the terms themselves when given a word-association task. They were subconsciously reacting negatively to the words.bbb

If just the words can stir negative bias in people, imagine what an actual person carrying the label "addict" can arouse.

The Penn researchers said their study was consistent with previous research that found some doctors, even mental health professionals, less willing to help patients who were labeled "addicts" or "substance abusers."

The researchers did not discount the fact that conscious bias against persons with addiction for example, how involved one would want to be with the person described is often based on personal negative experiences with "alcoholics" or "addicts." Family members, friends, co-workers have experienced pain and suffering from their connection to persons with alcohol or substance use disorders and a resistance to not just "calling them what they are" may be understandable.

But, the researchers said, over time, adopting what they call person-first language (referring to a person with a heroin addiction rather than a heroin addict) especially by public officials and the media could help reduce the negative bias and stigma that keeps people from seeking and getting help for their disease.

In 2017, prior to this study, the Associated Press, which publishes a style guide used by most news organizations, adopted a new policy on reporting on addiction. It recommends that news organizations avoid terms such as "addict" and "alcoholic" in favor of person-first language someone with an alcohol or substance use disorder or someone who was using opioids addictively, rather than a substance abuser or former addict. Someone in recovery, rather than someone who is "clean." Shift the blame from the person to the disease.

This doesn't excuse or absolve the person who is addicted from any damage he or she may have done, and it may be considerable. But it does provide an identity beyond the addiction and makes the road to recovery more navigable.

Related Topic(s): Addictions; Alcoholic; Bias; Doctors; Drugs; Health; Heroin; Language; Media; Medical; (more...) Opioids Narcotics; Recovery, Add Tags  (less...)
Add to My Group(s)
Go To Commenting
The views expressed herein are the sole responsibility of the author and do not necessarily reflect those of this website or its editors.