We live on an island surrounded by a sea of ignorance. As our island of knowledge grows, so does the shore of our ignorance.
-- John Archibald Wheeler

It ain't what you don't know that gets you into trouble. It's what you know for sure that just ain't so.
-- erroneously attributed to Mark Twain

The community of scientists has bequeathed to us a picture of the world that is fundamentally wrong. The picture so many of us carry in our minds is derived from 19th Century science. It is utterly inconsistent with quantum physics, and has been contradicted directly by a body of research on powers of the mind that has been marginalized by the mainstream. But somehow, the picture has survived and become ossified in some of the smartest minds on the planet.

The big-picture stories that our culture carries have consequences for the way we live our lives and the way we organize our communities. The "scientific world-view" is not only deeply at odds with science, it is also related to the ways our world is falling apart--the sense of powerlessness and hopelessness that we carry, and especially the sense of isolation and existential loneliness.

What is the scientific world-view?

How do we know it is wrong? Six stories

What will our world look like after the coming paradigm shift? 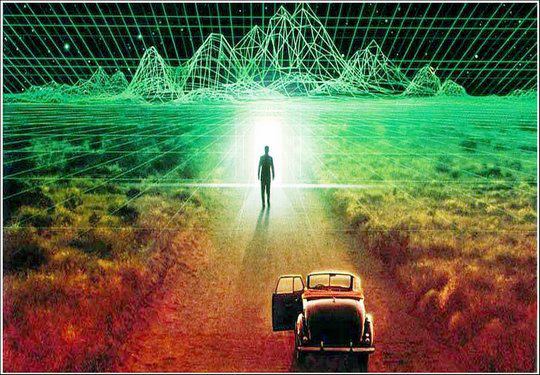 (Image by CuriousApes)   Details   DMCA
What is the scientific world-view?

Physical reality is the only reality. Particles and fields are real. Thoughts, emotions, desires are abstract concepts useful to us, but not fundamental constituents of reality. Elementary particles can be visualized well enough as miniature billiard balls. They interact with their near neighbors, following fixed laws. The laws of physics explain properties of the chemical elements, and the known laws of chemistry and physics are sufficient to understand biology, ecology, sociology, and on up.

Life is subject to the same physical laws as non-living matter. Life has no fundamental relationship to the physical universe. It's just something that happened, going along for the ride.

There is no room for free will. Our feeling of making choices must be an illusion. The future is determined by the past plus pure chance. "Quantum random" is the gold standard for random events absolutely unpredictable and unrelated to anything else in the world.

This view is sometimes called "physicalism" -- the physical world is the only thing that is real; and it is sometimes called "reductionism" -- everything on large scales can be explained in terms of emergent, aggregate properties of smaller systems, coming down ultimately to the level of particles.

It follows from this view that life is an opportunistic phenomenon, making use of the available chemistry for the end of growing and reproducing, which is what life does. Preferences, values, narratives -- all these have no fundamental existence, but they are defined arbitrarily by humans, with different humans having different values and preferences.

This view that all values are arbitrary in a fundamentally mechanical world led Nietzsche to notice that "God is dead", which led to the nihilistic movements of the 20th Century: Dadaism, Existentialism, atonal music and punk rock, post-modernism. If, as Yeats says, "the best lack all conviction"", perhaps part of the reason lies in the fact that our best and brightest have been drawn to the Scientific World-view, with its subtext that all is mechanical, random, and ultimately meaningless" Am I being unfair, linking all this to a belief that the only things that exist are particles and fields?

How do we know it is wrong?

All physical theories rely on fundamental constants, numbers that are arbitrary inputs that just happen to be what they are. Examples are the speed of light, the mass of the electron, the size of Planck's constant (which scales quantum effects), and the strength of gravity. After accounting for the arbitrariness of scales in mass, length, and time, there are about 20 such arbitrary constants. Beginning in the 1970s, it has been noticed that the kind of universe we live in depends sensitively on these numbers. In fact, many of them seem to be very finely tuned in the sense that if they were a little bit different from what they are, our universe would be vastly simpler and less interesting than it is. For example, if the gravitational constant were smaller, then there would be no galaxies or stars, just hydrogen and helium forever spread through space. If the strong force were a little less strong, there would be no chemical elements except hydrogen; and an extremely precise coincidence accounts for the abundance of carbon, which otherwise would be a trace element, far too rare to support life. Here are three books on the Anthropic Principle (Barrow & Tipler 1988, Davies, 2007, Rees, 1999).

How do scientists interpret this fact? The majority eschew any implication of design by positing that our universe, infinite though it may be in space and time, is but one among a truly stupendous number of universes that exist. The vast majority of such universes are incapable of supporting life. The very fact that we're here to ask the question explains the special combination of constants that characterizes our particular universe. But to other scientists, this embarrassment of dead universes is a gross violation of Occam's Razor, and they invoke a creator for special conditions. A third position avoiding deistic implications favors a model in which consciousness has primary existence, and the properties of matter have been shaped by consciousness as a home for itself. The latter idea connects suggestively to Robert Jahn's experiments cited below.

Related Topic(s): Scientific Method, Add Tags
Add to My Group(s)
Go To Commenting
The views expressed herein are the sole responsibility of the author and do not necessarily reflect those of this website or its editors.