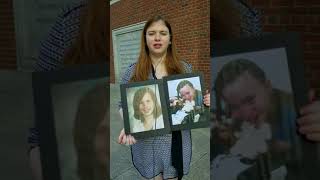 Over the past several months, I've told you about a whistleblower named Marty Gottesfeld. Marty was sentenced to 10 years in a federal prison for initiating a denial of service attack against the computer system at Boston's Children's Hospital. This was in protest of Children's having taken a young girl, Justina Pelletier, from her parents and accusing the parents of abusing her. The parents had not abused her, and they were later reunited with Justina. Children's complained that Marty had targeted them during their annual fundraising drive, costing them millions of dollars in lost donations. That was the whole point. Marty's action served to raise awareness about the case and to get the family back together. He succeeded.

Ten years in prison for an essentially victimless crime is harsh. It's also typical of what is happening to whistleblowers across the country. Just look at FBI whistleblower Terry Albury, who "leaked" information on systemic racism in the FBI. Look at Reality Winner, who "leaked" an analysis of Russian interference in the 2016 election. But Marty's sentence was even harsher than just 10 years in prison. First, he was transferred from a jail in New England to solitary confinement in the Metropolitan Detention Center in Brooklyn in the midst of a winter blackout that saw temperatures in the prison fall to below 30 degrees. He was then placed in the Bureau of Prisons (BOP) transportation system and eventually ended up at the Federal Correctional Institution (FCI) at Terre Haute, Indiana. Terre Haute is notorious for holding some of the most dangerous prisoners in America, including terrorists and Somali pirates who attempted to storm and take American ships in the Indian Ocean.

It took Marty a couple of weeks to find his footing at Terre Haute. To make his life as miserable as possible, which the BOP actively does with any prisoner who has access to the media, Marty was placed in a Communications Management Unit (CMU). The CMU is unusually restrictive, even by prison standards. I was in a modified CMU because, according to a memo from the warden to the staff that I received under the Freedom of Information Act, "CAUTION: INMATE HAS ACCESS TO THE MEDIA." In a modified CMU, the guards could go through both my incoming and outgoing mail, they could listen to my phone calls in real time, and they could seat me next to the guard station in the visitors' room to listen to the content of my conversations.

In a full CMU, Marty is simply forbidden to have contact with the media. He is being denied his constitutional rights. This isn't because he's done anything to anybody. It's because prison officials fear that he is going to report on incidents of waste, fraud, abuse, and illegality that he witnesses during his incarceration.

And that's exactly what has happened. Marty emailed me last week. Here's what he said:

There is no set of written canonical communications rules here and the guidance which I've received has at times been ambiguous. However, I have come to understand the following:

I may be being overly cautious about some of the above, but I would rather err to the side of caution. Again, there is no actual canonical set of written rules.

In a follow-up call to his wife, Dana, Marty said that he hoped the BOP's Inspector General would go to the prison to investigate allegations that the guards in the mail room were reading prisoners' legal mail (which is strictly forbidden) and reports that the floor in the Special Housing Unit, or SHU, prison parlance for solitary confinement, was so hot because of a steam pipe underneath it that prisoners were actually cooking burritos by placing them on the floor. The United Nations already has declared the US practice of solitary confinement a form of torture. Extreme heat, the Supreme Court has ruled, is cruel and unusual punishment and is illegal.

None of this is any big deal, right? Well, the BOP thought that this communication and this is all of it was so dangerous that they took Marty directly to solitary. He's been there since April 26.

I called and emailed the BOP to ask for an official statement of why Marty was taken to solitary. I was ignored both times. I don't think Marty cares, though. He knows that this issue is bigger than just Marty Gottesfeld. This is about human rights, constitutional protections, and civil liberties.

Marty couldn't contact the Inspector General to report waste, fraud, abuse, and illegality. He couldn't tell them about the illegal accessing of prisoners' private communications and the illegally hot temperatures. But I could. And I did. Let's see if it gets us anywhere. In the meantime, let's keep up the pressure on the BOP. Solitary confinement is the last place Marty Gottesfeld should be.

Related Topic(s): Punishment; Sentenced; Solitary Confinement; Whistleblower, Add Tags
Add to My Group(s)
Go To Commenting
The views expressed herein are the sole responsibility of the author and do not necessarily reflect those of this website or its editors.