"Let's have trial by combat."

On November 3, 2020, Americans went to polls in record numbers and by a margin of over seven million votes declared that Donald Trump would be a one-term president. The outcome should not have surprised anyone; Joe Biden was heavily favored to win in most pre-Election Day polls. Trump had lost the popular vote in the 2016 election and he had done nothing during his term to reach beyond his base and grow support. His approval rating was underwater during his entire presidency ranging from a low of 35% to a high of 49% and averaging just 41%. As Americans made their decision, 237,009 Americans had died in the COVID-19 pandemic after Trump had abdicated any leadership during the crisis.

It should have also been no surprise that Trump reacted to his humiliating loss by claiming that the election had been stolen. After losing the Iowa caucus in 2016 he accused Ted Cruz of cheating and demanded that "either a new election should take place or Cruz results nullified." Upset over his loss of the popular vote to Hilary Clinton, he claimed that "in addition to winning the Electoral College in a landslide (1), I won the popular vote if you deduct the millions of people who voted illegally." In an attempt to prove this fraud he launched a "voting integrity commission," which after two meetings disbanded without finding any "evidence to support claims of widespread voter fraud". Three months before the 2020 election he was telling his fans that "the only way we're going to lose this election is if the election is rigged."

After losing to a man he described as the "worst candidate in history", Trump and his supporters filed at least 50 lawsuits trying to overturn the election results. None were successful. Despite their public pronouncements, the lawyers filing these suits "conspicuously refused to embrace the language of 'fraud'". His own Attorney General, William Barr, did not find "fraud on a scale that could have effected a different outcome in the election."

Trump's description of the alleged fraud during his inappropriate (and probably illegal) phone call to Georgia Secretary of State Brad Raffensperger shows just how weak his case is. According to Trump, it was very clear that he "won very substantially" in Georgia because he would have "25 - 30,000 people at a rally [during a pandemic] and the competition would get less than 100 people." He claimed that certain ballots were scanned three times even though a hand recount and an audit had "proved conclusively" that this had not happened. He also asserted that it did not "sound like a very normal" occurrence that people would move out of the state of Georgia and then move back.

Rebuffed by the courts and unwilling to concede his loss, Trump set up a last stand on January 6, the day that Congress would convene to count the votes from the Electoral College paving the way for Vice President Pence to declare Biden the victor. In the days leading up to this ceremonial counting of the votes, Trump mercilessly bullied Pence, his normally compliant lapdog. Members of the House and Senate were lined up to object to the legally certified votes of several swing-states, potentially disenfranchising millions of legitimate voters. His hordes of deplorable fans were called into service for a massive show of force that would, in the words of one attendee, make lawmakers "think twice about what they're doing" and to be left "shaking in their shoes."

In no circumstance can any member of the mob that descended upon Washington D.C for the events of January 6 claim to be part of a peaceful protest. Unlike massive crowds that have protested in our nation's capital to demand the expansion of civil rights or the end of an unjust war, the Deplorables stated goal was to serve the interests of one man and his desire to overturn the will of the voters. This was a coup and coups are not peaceful in a democratic society. 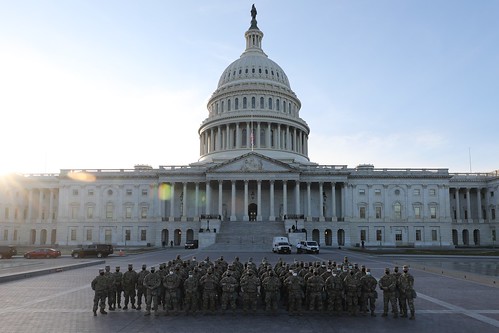 New Jersey National Guard
(Image by The National Guard)   Details   DMCA
As we all know now, the attempted coup was not bloodless. A policeman was savagely beaten to death. The president's masses crushed another law enforcement officer as he screamed in pain, swiping at his gas mask as they sprayed substances at those who stood in their way. One of the Trump terrorists was shot to death as she tried to crawl through a barricaded door into a secure area housing elected legislators. The FBI states that "NPD and Capitol police were in open-handed combat with some of these persons inside the Capitol where tear gas was used on the Capitol police and federal officers."

The attempt to circumvent democracy continued after the Capitol building was secured. Rejecting the rulings of the judicial system, 121 House Republicans and six Senators voted to reject the results in Arizona. The voters of Pennsylvania were ignored by 138 House Republicans and seven Senators. In making his case to disenfranchise the voters of Arizona, Ted Cruz ignored the facts and instead referenced the doubt in the results that Trump had sown.

Our country is badly fractured and desperately needs a leader to unite us. However, no reconciliation is possible unless those who have divided us are held accountable for their actions. Impeaching the president or, even better, holding him criminally responsible for his actions, does not prevent us from moving on from the failure of the past four years. Instead, it is a necessary step to ensuring that our democracy is safe from future presidents with authoritarian tendencies who are not as incompetent as Trump in implementing their plans.

"stand back and stand by."
- Donald Trump to the Proud Boys

Related Topic(s): Coup Attempt, Add Tags
Add to My Group(s)
Go To Commenting
The views expressed herein are the sole responsibility of the author and do not necessarily reflect those of this website or its editors.