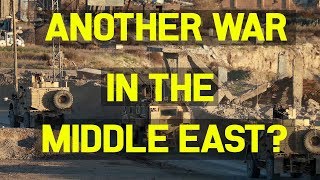 Is The US Preparing For A War With Iran?
(Image by YouTube, Channel: TheDC Shorts)   Details   DMCA
Human Rights and Global Wrongs

As President Donald Trump, National Security Adviser John Bolton and Secretary of State Mike Pompeo rattle their sabers, there is no evidence that Iran poses a threat to the United States. It was Trump who threatened genocide, tweeting, "If Iran wants to fight, that will be the official end of Iran." The Pentagon is now considering sending 10,000 additional troops to the Gulf region for "defensive" purposes and not in response to a new threat by Iran. Threats to use military force like the use of force itself violate U.S. and international law.

Last week, Pompeo said U.S. intelligence had determined that Iranian-sponsored attacks on U.S. forces "were imminent." The Trump administration asserted, "without evidence," according to The New York Times, that new intelligence revealed Iran was sponsoring proxy groups to attack U.S. forces in Iraq and Syria.

The Pentagon announced its intention to deploy a Patriot antimissile battery to the Middle East. Three days later, Acting Defense Secretary Patrick Shanahan said the United States would send up to 120,000 troops to the region if Iran attacks U.S. forces or speeds up work on nuclear weapons.

But on May 14, Maj. Gen. Chris Ghika, a senior British military official and deputy commander of the U.S.-led coalition fighting ISIS, told reporters at the Pentagon that "there has been no increased threat from Iranian-backed forces in Iraq or Syria."

The U.S. and Israel Plan Regime Change in Iran

The Trump administration and its close ally Israel have long had their sights on regime change in Iran.

One year ago, Trump withdrew the United States from the Iran nuclear deal. Under the 2015 Joint Comprehensive Plan of Action (JCPOA), Iran agreed to curb its nuclear program. In return, Iran received billions of dollars of relief from punishing sanctions.

Despite the fact that the International Atomic Energy Agency repeatedly confirmed that Iran was complying with its obligations under the agreement, Trump capitulated to pressure from Israel. The United States pulled out of the historic deal and re-imposed the harsh sanctions against Iran.

Israeli Prime Minister Benjamin Netanyahu took credit for convincing Trump to withdraw from the deal. "I asked him to leave the JCPOA," Netanyahu claimed. "It was me who made him to depart from the deal."

Now Israel is fanning the flames of war. Prominent Israeli journalist Barak Ravid, national security reporter for Channel 13 in Israel, wrote at Axios that senior Israeli officials met with Bolton and his team in late April and gave them "information about possible Iranian plots against the U.S. or its allies in the Gulf."

U.S. regime change in Iran would reprise the covert 1953 CIA coup that overthrew the democratically elected Mohammad Mosaddegh, who had nationalized British oil interests. The United States replaced Mosaddegh with the vicious Mohammad Reza Shah Pahlavi, who ruled Iran with an iron fist until he was overthrown in the 1979 Revolution and replaced with the Ayatollah Khomeini's theocracy. But U.S. regime change in Iran would be overt this time.

The U.S., Not Iran, Is Acting Aggressively

The New York Times cites military and intelligence officials in the U.S. and Europe who maintain that during the past year, "most aggressive moves have originated not in Tehran, but in Washington" where Bolton "has prodded President Trump into backing Iran into a corner." Bolton "has repeatedly called for American military strikes against Tehran," The New York Times reported.

Pompeo listed 12 demands Iran must meet to secure a new nuclear agreement. "Taken together, the demands would require a complete transformation by Iran's government, and they hardened the perception that the administration is really seeking regime change," according to The Associated Press.

The Pentagon has prepared plans for an air attack on Iran, veteran Middle East war correspondent Eric Margolis reported in July 2018. He wrote:

"The Pentagon has planned a high-intensity air war against Iran that Israel and the Saudis might very well join. The plan calls for over 2,300 air strikes against Iranian strategic targets: airfields and naval bases, arms and petroleum, oil and lubricant depots, telecommunication nodes, radar, factories, military headquarters, ports, water works, airports, missile bases and units of the Revolutionary Guards."

Related Topic(s): Attack On Iran; Aumf; Integrity; International Politics; Iran Nuclear Talks; Iran Treaty; Israel; Sanctions; Unconstitutional, Add Tags
Add to My Group(s)
Go To Commenting
The views expressed herein are the sole responsibility of the author and do not necessarily reflect those of this website or its editors.