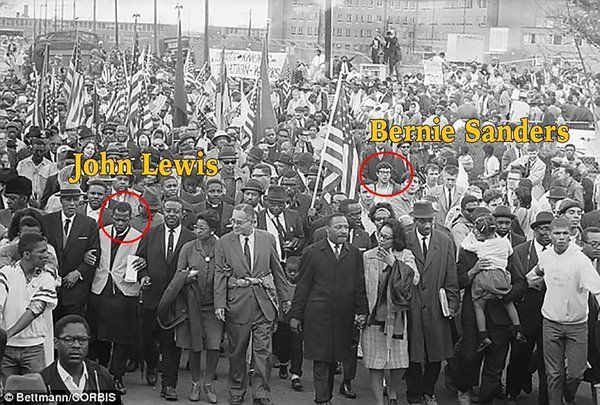 Sticks and stones can break my bones, but names can never hurt me. The big orange fuhrer struggles at his childish name calling. Thrashing about after calling Bernie a Communist. Bernie Sanders answers by winning the Iowa Caucuses and the New Hampshire primary. What's that big mouth? What else have you got to say? Crickets, as Bernie's lead in the polls grows as America coalesces around his candidacy. Like we were looking for something that was in front us the whole time. "Communist!" That's it, that's all the big Cheeto's got, calling a thirty-year member of the United States Congress a Communist.

And, and, and he's a Communist! It's a long way to November big mouth and you're going to have to do a lot better than that. As a child my father took a job in Montgomery, Alabama. And I remember bloody Sunday and I remember the march from Selma to Montgomery. My dad loaded us up in his big Chrysler and took us up highway 80 towards Selma. For a brief second I saw Martin Luther King and it was one of those images that remains etched in my brain but what did I know? I was just a little kid whizzing by on a highway, but Bernie marched with Dr. King.

Let me play antique grandpa here for a minute. You youngsters with your rock and roll music and your skateboards. If you were a white person supporting the civil rights movement back in the day, it wasn't always popular, you'd get called names like n*gger lover. I want to be fair about this and clear, it wasn't just in the south. It was in Chicago and Cleveland and Boston, New York and Los Angeles. White people were murdered for supporting the civil rights movement. They got their tires slashed and were beaten up; this wasn't just something to do on a slow sunny Saturday. In many ways it was a revolutionary act, throwing down the gauntlet against injustice"for someone else.

Related Topic(s): America; Caucus; Congress; People; People; Polls; Youngsters, Add Tags
Add to My Group(s)
Go To Commenting
The views expressed herein are the sole responsibility of the author and do not necessarily reflect those of this website or its editors.