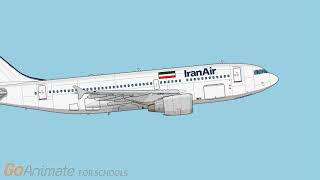 The tragic Ethiopian Airline plane crash recalls another passenger plane crash some 30 years ago. The latter, however, was not due to a mechanical malfunction but to U.S. missiles. And while very few Americans remember this incident, it still weighs heavy on the hearts of many Iranians -- as we discovered on our recent trip there.

The tragic downing of the commercial passenger airline, Iran Air Flight 655, happened on July 3, 1988. A U.S. Navy ship called the Vincennes was stationed in the Persian Gulf to protect oil trade routes. The plane had just taken off from nearby Bandar Abbas International Airport in southern Iran when U.S. personnel on the warship fired two surface-to-air missiles. The flight was still in Iranian airspace, climbing on its regularly scheduled flight to Dubai, when it was hit. The plane disintegrated immediately and crashed into the water, killing all 290 onboard -- 274 passengers and 16 crew members.

According to the U.S. government, this was an accident: the crew thought the Iranian Airbus A300 was an attacking F-14 Tomcat fighter jet.

Most Iranians, however, believe it was a deliberate war crime. Earlier that day, the same U.S. ship had sunk two Iranian gunboats in Iranian waters and damaged a third.

Months before the plane was shot down, air traffic controllers and the crews of other warships in the Persian Gulf had been warning that poorly trained U.S. crews, especially the gung-ho captain and crew of the Vincennes (or "Robocruiser," as other crews had nicknamed it), were constantly misidentifying civilian aircraft over the Persian Gulf, making this horrific incident entirely predictable.

The U.S. Navy added insult to injury when, two years later, it awarded combat medals to the warship's captain and crew--never even mentioning the downing of the plane. The town of Vincennes, Indiana, for which the ship was named, even launched a fundraising campaign for a monument to honor the ship and its crew.

Particularly callous was a statement by then Vice-President George H.W. Bush, who was campaigning for president at the time. "I will never apologize for the United States of America. Ever," he insisted, "I don't care what the facts are. I'm not an apologize-for-America kind of guy."

While U.S. officials refused to accept culpability, in 1996 the Iranians took the U.S. government to the International Court of Justice. With all the evidence against the Vincennes, the U.S. government agreed to a settlement, granting $213,000 per passenger to the victims' families. But the government still refused to formally apologize or acknowledge wrongdoing.

While most Americans have no memory of this incident, in Iran the date of the deaths of 290 innocent people at the hands of the U.S. military is marked every year just as the 9/11 attack is remembered every year in the United States. To some Iranians, it is just one more example of the callousness of U.S. policy.

That's why our peace delegation that visited Iran in early March decided to make a special gift to the Peace Museum in Tehran, a museum dedicated to ending war. It was a hand-crafted commemorative book crafted by one of our delegates, Barbara Briggs-Letson, who is an 85-year-old retired American nurse from San Francisco. It contained a letter of remorse, verses of poetry, the names -- in Farsi -- of all those who lost their lives, and individual notes from the 28 members of our delegation.

The moving ceremony at the Peace Museum left all of us, Americans and Iranians, weeping. We made it clear that while our government won't apologize for its dirty deeds in Iran -- from overthrowing Iran's democratically elected government in 1953 to shooting down a passenger plane in 1988 to unilaterally withdrawing from the nuclear agreement in 2017 -- we, the people, will.

Related Topic(s): Apology; Iran; Killing; Plane Accident, Add Tags
Add to My Group(s)
Go To Commenting
The views expressed herein are the sole responsibility of the author and do not necessarily reflect those of this website or its editors.