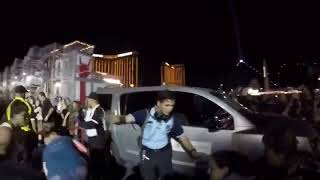 At 0:09 the people start to make their way to the exit on a cue that sounds like an indian battle cry. Even the cameraman is baffled and says WTF is going on?
(Image by YouTube, Channel: WSA)   Details   DMCA

This note is in response to your invitation for medical professionals to comment on the LV shootings with respect to the authenticity of the publicly available videos and whether they prove or disprove that actual victims were injured or killed. I am a retired surgeon with experience in managing patients with massive blood loss in an operating room setting and in other in-hospital cases of marked hemodynamic instability from hemorrhage.

The retired surgeon from Florida made many excellent points already and I will try not to repeat them. Here are some additional problems with the scene as presented in the publicly available videos:

1.) We do not see CPR being conducted on anyone that I am aware of. This would be extremely unusual for a massive shooting. Surely someone would have captured it on their cell phone. Even if it took a while for the EMT's to arrive, it would be reasonable for non-medical personnel in the audience who have taken a basic CPR course to have started it.

2.) Given the alleged number of victims, we should have seen some evidence of arterial bleeding, no doubt at least several instances of massive hemorrhage (arterial bleeding is often associated with blood being ejected from the site of injury, a so-called arterial "pumper"). What is the probability that no one captured an example of it?

3.) If some of the rounds were from a fully automatic high caliber rifle or machine-gun like weapon(s), some of the victims should have had obvious massive and visible trauma to the head, neck and extremities. So far, I have seen no evidence of it.

4.) There is a complete absence of the kind of urgency one would expect from the professionals who allegedly responded on display in the videos available. Where are the EMT's with their stretchers rushing to the victims? We see pictures of people in the audience crouching down, laying down, crawling, walking and running away but no evidence that any of them have sustained a gun shot wound(s).

5.) If hundreds of people were actually injured (not counting those who allegedly died at the scene) and taken to local emergency rooms, someone should have captured evidence on their cell phones of severely injured victims being wheeled into ER trauma rooms and being taken to surgery. I have not seen any videos from emergency rooms in which victims with actual wounds are displayed. Surely some of the local media would have arrived at the local hospital ER's to take pictures and to interview the uninjured persons accompanying their friends/relatives. No interviews have appeared in which surgeons who attended the victims have been carefully questioned for the extent of injuries sustained. Similarly, no pathologists have been interviewed about their necropsy findings.

6.) Where are the death certificates of those who died at the scene? Where are the autopsy reports which would have been mandatory? I have seen pictures of alleged deceased persons but not actual proof of death(s). Moreover, why have there been no news conferences from the hospital(s) reporting on the progress or subsequent deaths of injured patients? Surely, someone with critical injuries must have died by now if the event was not staged. The only videos I have seen depict alleged shooting victims who do not appear to have sustained a GSW.

7.) If hundreds of injuries/deaths occurred, the video evidence should have been overwhelmingly in support of it given that almost everyone has a smart phone with camera capability. Yet, we have clearly been shown videos which do not support it. That is very strange and suggests that better video evidence is lacking, as would be expected if much or all of the scene was staged.

8.) It has been reported that a mass casualty drill was taking place in LV either at or prior to the alleged mass casualty event. Many false flag events have been preceded by a drill that "went live." It has also been reported that citizen researchers who have called the closest local hospitals have been told that they had no record of gunshot victims. These claims need to be substantiated.

9.) The fact that advertisements/requests were placed asking for "Crisis Actors" in the LV area strongly suggests that the event was either partially or totally staged.

These represent only a few of the problems that come to mind at this point.

This reader writes that there was an active shooter drill underway in Las Vegas:

Related Topic(s): Investigation; Las Vegas Shooting; Media; Shooting; Trauma, Add Tags
Add to My Group(s)
Go To Commenting
The views expressed herein are the sole responsibility of the author and do not necessarily reflect those of this website or its editors.