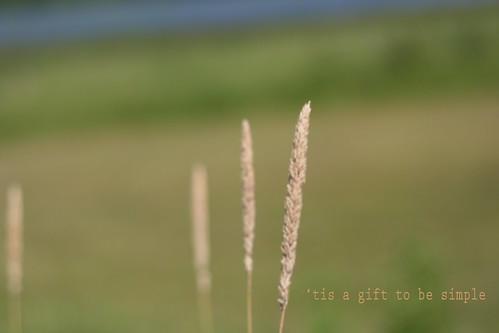 'tis a gift to be simple
(Image by katerha)   Details   DMCA

"The task of setting free one's gifts was a recognized labor in the ancient world....the spirit that brings us our gifts finds its eventual freedom only through our sacrifice, and those who do not reciprocate the gifts of their genius [daemon, personal spirit that comes to us at birth] will leave it in bondage when they die." -- Lewis Hyde, The Gift

In a capitalist culture of commodification, people have been reified and things reanimated. Our national artists -- the advertisers -- have mastered this trick. People become persons through things, or the things images can secure; things possess a life of their own which they can impart to their possessors. Conversely, without such things one becomes a nobody, as the poor know so well. As long as you can convince people that objects and people are of equal value, the rest is easy. You can even declare that you are not an object to be used, even as you have bought into the culture of commodification through images. Daniel Boorstin put it this way in his classic study, The Image: A Guide to Pseudo-Events in America:

At no time is this more evident than in the months leading up to Christmas and the holidays. Gorging frenetically on "gift" buying, giving, and receiving in a futile attempt to appease an unacknowledged and unconscious indebtedness and guilt, people reveal the truth of a rudderless and faithless society lost in the cosmos. The secularization of the economy with the development of modern capitalism underlies our present condition. Norman O. Brown writes:

That is why so many people will be having a special guest for Christmas. Possessed by their possessions, while disbelieving in Luther's Satan, the American people are in the process of bringing Satan home for the holidays. Unseen but present, he will have a place of honor at Christmas dinner tables throughout the land. But don't worry, he has a parsimonious appetite and just nibbles. My sources tell me that he likes turkey and ham, but isn't too keen on vegetarian fare, and forget vegan. Yet I am told he has a ravenous appetite for presents, so get shopping. I hope my sources are reliable, but I never disclose them. You can always get him an Amazon gift card.

These thoughts were sparked a few weeks ago when I sent my grandchildren chocolate Advent calendars. They are, so I think, innocent treats for children. A chocolate a day delivered out of little doors can't hurt, except I suppose Grinch would say, "Are you kidding, think of cavities!" To which I reply, echoing Melville's Bartleby the Scrivener, "I prefer not to."

But I do want to think about the vast cavity in the American soul. I know Santa is cute, and even though he dresses in red like Satan, I loved him when I was a child. He once brought me a mechanical toy soldier made of metal. You wound his key and he marched to war, no questions asked. Rather than march forward, however, he went in circles, which seemed stupid until I got older and realized he was a prophet. Even Santa makes mistakes.

In those days, and today for my grandchildren, Christmas is also a holy day to celebrate the birth of a political and spiritual radical, a poor boy born in a stable, an anti-war trouble-maker bound to be executed by the state. To contemplate a newborn infant in his mother's arms -- any infant -- and to let your mind transport him as an adult to the torturer's prison, beaten and bloody, and taken ignominiously to his public execution as an example to all those who've heard his message of peace and voluntary poverty, redeems the day, banishes the devil from the table where he tries to poison the gift of hope and sharing the presence of loved ones brings. In the presence of intangible gifts, the gluttonous one flees. The song puts it thus: "'Tis the gift to be simple, 'Tis the gift to be free, 'Tis the gift to come down where we ought to be." And when Santa keeps his gift giving for children simple, while excluding adults except for token exchanges, he is a welcome jolly guest at the dinner table, unlike the nasty fellow from below.

Being a sociologist, I am aware that every day in the United States many people are undergoing exorcisms. Satan seems to be a popular guy who gets around and takes many forms, as these reports suggest. I hear he turns heads, and have read that when some possessed people are exorcised they violently cough up parts of radios, computer chips -- you name it. You can see why electronics are the number one Christmas gift. Our friend from below probably has the latest cell phone and a chip inserted in his heart. I'm not joking. Trust me.

As a boy I had a dog who was like those possessed ones. He ate and pooped light bulbs, electrical cords, crayons, clothespins, etc. After he bit my little sister on her leg requiring many stitches, my parents banished him to the ASPCA. Maybe they should have called the exorcist. Of course I loved my sister, but as a child I also loved my dog, and his name wasn't Lucifer, despite carrying light bulbs in his stomach. And in those days I loved Santa too, as only a child can.

As I await his arrival now that I'm a bit older, I have created my own Advent calendar. Every day from December 1 until December 25 I open a little door and drop in something. This door opens down to hell, where our friend gleefully awaits his dinner invitation. Rather than invite the bastard, I try to dump on him all he induced me to possess so he could possess me. Never having been big into electronic crap, my stuff is low-tech but powerful, and the "stuff" is often not any thing at all, but inclinations, habits, ideas, and illusions that keep me thinking I need more while being less -- William Blake's chains:

Related Topic(s): Christmas; Devil; Exorcism; Gifts; Satan; Stuff, Add Tags
Add to My Group(s)
Go To Commenting
The views expressed herein are the sole responsibility of the author and do not necessarily reflect those of this website or its editors.