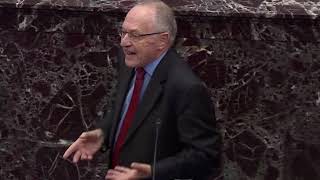 From the place we are now, it is still difficult to imagine 14 Republican senators voting on the floor of the Senate to remove Donald Trump from office. It is, however, finally a moving train and the entire country is on it.

A question is often asked of Senate pundits: How many Republican senators would vote to convict Donald Trump if it were a secret vote? The answer is, invariably, more than enough to remove him from office. That answer is normally dismissed as meaningless because the vote will not be secret, but it speaks to a hidden desire on the part of even Trump's supporters to rid themselves of his burden. What is lacking is not the will on the part of most Senate Republicans, but rather a politically safe means. While that may be cowardly, it is nonetheless a thing, and things can be addressed.

We keep hearing over and over again as the impeachment unfolds, "Let the people decide." While that is a constitutionally incomplete solution, the Constitution clearly envisions a primary role for the people in the process. Good news! The people now appear to be driving the bus in real time.

The polling numbers that now show 75% of Americans favoring witness testimony in the Senate impeachment trial are moving the equation rapidly and creating an atmosphere in which the cowardly can find a bit more courage. If a vast majority of the people want witnesses, then it can be assumed the people want the truth. If the truth makes an appearance, it could easily be with a Perry Mason-like flourish.

It would seem certain that former national security adviser John Bolton has, as he says, "a story to tell," and that story is likely to be highly relevant. The other witnesses the Democrats are seeking include but may not be limited to Mick Mulvaney, Mulvaney's adviser Robert Blair, and Michael Duffey, an Office of Management and Budget staffer.

So far former federal prosecutor, New York City mayor, and now Trump personal attorney Rudy Giuliani has been "hands off" for congressional Democrats and the Justice Department under Attorney General William Barr. He shouldn't be.

Giuliani knows more by far about the Ukrainian "drug deal" than all the other proposed witnesses combined. His testimony, if compelled, could be explosive on a nuclear scale. Giuliani was Trump's point man on Ukraine, his personal liaison on the ground in Ukraine trying to implement his plan.

The White House and Giuliani will argue that as Trump's personal attorney he cannot be compelled to testify, based on both a blanket invocation of executive privilege and more specifically attorney-client confidentiality. The blanket assertion of executive privilege on all matters Trump does not want in the public realm is in all likelihood legally unsustainable. However, the issue of attorney-client confidentiality does raise more potent legal questions.

The principle of attorney-client confidentiality is foundational in US law. It is not, however, absolute. In the hypothetical, for instance, if instead of shooting someone on New York's Fifth Avenue Trump ordered his attorney, in this case Rudy Giuliani, to do so, neither Trump nor Giuliani would be protected by attorney-client confidentiality. Giuliani would be a material witness and participant in a crime and subject to the full weight of the legal process, which could in turn implicate Trump and create legal exposure for him as well.

In the current case, a Fifth Avenue shooting is not at issue, but High Crimes and Misdemeanors relating to the Ukrainian affair and the impeachment proceeding it has generated are.

Right now, Majority Leader Mitch McConnell and Republican senators continue to protect Donald Trump, because they calculate doing so is a lesser political risk than removing him from office.

But there is a genie in the bottle named Truth, and that genie is trying very hard to get out. If it does, all bets are off. This thing has the potential to really move.

Related Topic(s): Donald Trump; Donald Trump Versus The Constitution; Senate; Supporters; Trump Bigotry; Trump Impeachment; Trump Threats; Voting, Add Tags
Add to My Group(s)
Go To Commenting
The views expressed herein are the sole responsibility of the author and do not necessarily reflect those of this website or its editors.