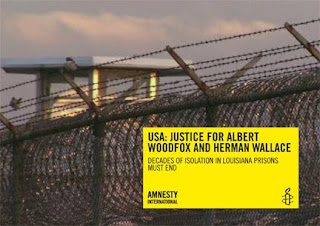 This week Amnesty International launched a global campaign calling for the authorities in the United States to end the solitary confinement of Herman Wallace and Albert Woodfox. They state that "the treatment to which the two men have been subjected was 'cruel and inhumane' and amounted to a violation of the US' obligations under international law".

Guadalupe Marengo, Amnesty's deputy director for America said "We are not aware of any other case in the USA where individuals have been subjected to such restricted human contact for such a prolonged period of time." Amnesty has also raised questions about the legal aspects of the case including the lack of any physical evidence linking Herman and Albert to Brent Miller's murder, lost DNA evidence and convictions based on questionable inmate testimony.

Amnesty is calling for people around the world to contact Governor Jindal via email or post and let their outrage regarding this injustice be heard. The spotlight on injustice which Amnesty International is now shining on the case of the Angola 3 is a monumental step of support to the campaign. We hope Albert and Herman's supporters will lead the charge in responding to Amnesty's call for action.

Read/Download the full report: USA: 100 years in solitary: 'The Angola 3' and their fight for justice.

Below is the full press release written by Amnesty International, also available online.

The US state of Louisiana must immediately remove two inmates from the solitary confinement they were placed in almost 40 years ago, Amnesty International said today.

Albert Woodfox, 64, and Herman Wallace, 69, were placed in "Closed Cell Restriction (CCR)" in Louisiana State Penitentiary - known as Angola Prison - since they were convicted of the murder of a prison guard in 1972. Apart from very brief periods, they have been held in isolation ever since.

"The treatment to which Albert Woodfox and Herman Wallace have been subjected for the past four decades is cruel and inhumane and a violation of the US's obligations under international law," said Guadalupe Marengo, Americas Deputy Director at Amnesty International.

"We are not aware of any other case in the USA where individuals have been subjected to such restricted human contact for such a prolonged period of time."

Over 40 years ago in Louisiana, 3 young black men were silenced for trying to expose continued segregation, systematic corruption, and horrific abuse in the biggest prison in the US, an 18,000-acre former slave plantation called Angola. In 1972 and (more...)
Related Topic(s): Amnesty International; Angola State Prison; Convictions; Evidence; Globalism; Injustice; International Policy; International Relief Aid; Justice; Law; (more...) Prisoners; Rights; State; Video, Add Tags  (less...)
Add to My Group(s)
Go To Commenting
The views expressed herein are the sole responsibility of the author and do not necessarily reflect those of this website or its editors.