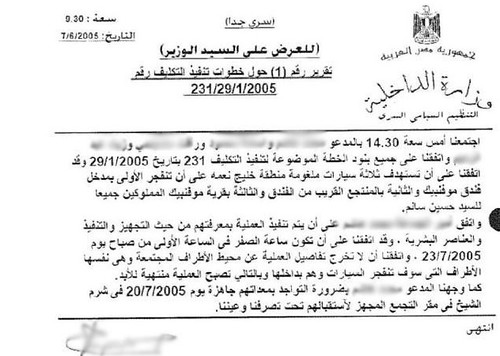 Egyptians stormed Amn Dawla, a State Security building in Nasr City, over the weekend. Protesters were aware that security was burning, shredding and destroying documents that might incriminate State Security officials in any future investigations or pursuits of accountability in the aftermath of the toppling of President Hosni Mubarak. They entered the building, started taking photos and video and took some of the documents to scan and post online or hand over to the armed forces so State Security could not be free from justice.

Inspired by WikiLeaks, Amn Dawla Leaks was instantly born. Twitter and Facebook accounts began to circulate the documents. The information, in Arabic, received many requests for English translation. It became clear there was much world interest and many would want to know what was uncovered.

One main revelation that has come out in the first days involves a bombing that up to this point was believed to have been perpetrated by Bedouins or Islamists. In the resort city of Sharm el-Sheikh on the southern tip of the Sinai Peninsula, about eighty-eight people were killed.

The document describes three car bombs that are to be detonated at the first entrance of the Movenpick Hotel. The second is to be detonated near the hotel and the third is to be detonated at a hotel in the village of Movenpick. All sites of detonation are intended to damage property owned by Hussein Salem. The bombings are planned for Revolution Day, a day that commemorates Gamal Abdel Nasser's overthrow of King Farouk in 1952.

Prince Mohammed Hashim, Osama Mahmoud Raafat Meselhi and Ziad Abdel-Rahim all agree to terms of implementation on January 29, 2005. The zero hour is scheduled for "the first hour on the morning of 7/23/2005." It is agreed that the operation will not "depart from the periphery of the parties which combined the same parties that will explode cars when they are inside and thus the process becomes terminated forever."

The equipment is agreed to be "equipped" and ready on July 20, 2005. The document reveals the bombings were ordered by Gamal Mubarak and former head of the Interior Ministry Habib el-Adly (who since the fall of Mubarak been indicted). The motivation for the bombing, revealed in another document , is a gas deal with Israel. Mubarak believes he must seek revenge because Salem "triggered" a reduction in his commission for the deal from 10% to 5%.

ElBadil writes in their coverage of the document that the Minister of Interior report, which became the official story in Egypt, reads at 1:15 am three locations were bombed in the "P-town of Sharm el-Sheikh." Islamic elements targeted Ghazala Garden, the Old Market and "a location of the microbus near Naama Bay." The first blast in the "bazaar" was car bomb that killed 17 people. A bomb stashed in a backpck and placed next to Movenpick Hotel exploded next and killed six tourists. And then, in a hotel in Naama Bay, 45 people were killed.

After the bombing, twenty-five were arrested, as Egypt went after Bedouins they believed were responsible for the bombings. Jonathan Steele, who was The Guardian's foreign correspondent at the time, appeared on Democracy Now! and reported:

The police still don't know really which lead to follow. As you say, there are five different groups that have made claims, but no evidence that any of them could be serious. They may or may not be, but there's nothing to point to it other than just purely the web statements. And I think most people now assume that the link is more with the bombings last October, which appears to have been done by local Egyptian militants of one kind. It's not quite sure exactly what their purpose was, although obviously Taba is very close to Israel, so it would be connected with the Egyptian-Israeli issue. Egypt, after all, is the country that is most closely connected in the Arab world with Israel. It still has diplomatic relations. And people therefore think it's not to do with al-Qaeda, it's not to do with Osama bin Laden; it's much more to do with Egyptian militants.

Cables released by WikiLeaks mention the Sharm el-Sheikh bombings. 10CAIRO179 , which is a scenesetter for then-FBI Director Robert Mueller's visit to Cairo, describes the "vigilance and effectiveness of the Egyptian security services."

Egypt is an ally in the GWOT, and we maintain close cooperation on a broad range of counter-terrorism and law enforcement issues, including an annual meeting of the U.S.-Egypt Counter-Terrorism Joint Working Group. Egypt suffered major domestic terror attacks in 2005 (a simultaneous triple bombing in Sharm El Sheikh, which killed 88 and wounded 200), and in 2006 (triple bombing popular tourist town of Dahab, which killed 24 people). There have been no domestic terror attacks in 2007, due in no small part to the vigilance and effectiveness of the Egyptian security services. The Egyptian government's active opposition to Islamist terrorism and effective intelligence and security services makes Egypt an unattractive safe haven for terror groups, and there is no evidence to suggest that there are any active foreign terrorist groups in the country. However, Egypt's northern Sinai region is a haven for the smuggling of arms and explosives into Gaza, and a transit point for Gazan Palestinians. Palestinian officials from Hamas have also carried large amounts of cash across the border. The smuggling of weapons and other contraband through the Sinai into Israel and the Gaza Strip have created criminal networks that may be associated with terror groups in the region, and is an irritant to both the US-Egypt and Israel-Egypt bilateral relationships. The apparent recent radicalization of some Sinai Bedouin may possibly be linked in part to these smuggling networks and Egyptian efforts to dismantle them.

09CAIRO163 and 09CAIRO746 both suggest Sinai Bedouins have been monitored closely by the Egypt government (and the US government) in recent years. It has been feared Iran wanted to recruit them to help "facilitate smuggling to Gaza." They have been suspected of arms, drugs and human trafficking, which has influenced how the government treats Bedouins that typically tend to be impoverished and undereducated.

Kevin Gosztola is managing editor of Shadowproof Press. He also produces and co-hosts the weekly podcast, "Unauthorized Disclosure." He was an editor for OpEdNews.com
Related Topic(s): Democracy; Egypt; Egyptian Revolution; Gamal Abdel Nasser; State Department; Wikileaks, Add Tags
Add to My Group(s)
Go To Commenting
The views expressed herein are the sole responsibility of the author and do not necessarily reflect those of this website or its editors.