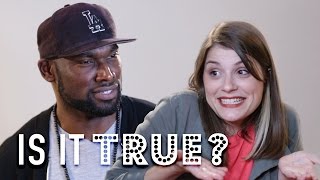 Americans are Dumber than the Rest of the World | Is It True? The United States of America is the world's largest economy, but is it home to the smartest people? Many foreigners believe Americans are self-absorbed ...
(Image by YouTube, Channel: All Def)   Details   DMCA

It appears what characterizes many (most?) Americans is their indifference or detachment from what their government is doing in the world. It seems unmistakable to this observer..

We don't seem to care about the atrocities our government commits in our name. Some of us saw the torture videos posted on the internet-Abu Ghraib in Iraq. The same with Wikileaks publishing the video of the US attack helicopter killing Reuters reporters and innocents in Iraq. However, he killing of innocents in wedding parties and funeral processions-Afghanistan, missile strikes and drone attacks in Iraq, Afghanistan, Pakistan, Syria, Yemen, Somalia, Libya, the endless war on terrorism is only found in the alternative media. During the Vietnam war prime time news showed American GI's wounded and on stretchers, even responding to reporters. Not anymore. Our wars are hidden. None of it shown on regular TV thus kept out of sight. The wars are fought in some foreign location-locations most Americans probably couldn't find on a world map.

Besides we're told it's done against "enemies" to ensure "freedom of navigation"-against China in the South China Sea-against regimes that kill its own people in chemical attacks i.e., President Bashar Assad in Syria, evil dictators pursuing WMD-Saddam Hussein, Iran, a country accused of pursuing nuclear weapons, the terrorism of a Osama bin Laden. So it's implied we must remain vigilant against our "enemies" in order to protect and defend ourselves.

Such rubbish has been a constant theme since the end of WWII beginning with the cold war against Soviet Communists and Communism, the "red baiting" of the 1950's McCarthy era, the "domino theory" and the Vietnam war in the 1960's and early '70's, the Iran Contra era against the Nicaraguan Sandinistas in the 1980's, support of bin Laden's Mujahedeen in Afghanistan against the Soviet's invasion starting 1979 through the '80's, the Gulf war in 1991 against Saddam Hussein's invasion of Kuwait, to 9/11 the invasion of Afghanistan in 2001, Iraq in 2003, the proxy war supporting mercenaries beginning 2011 in Syria plus our air war there, now military occupation of Syrian oil fields east of the Euphrates River, to say nothing of our support of Saudi Arabia's war in Yemen. On and on, endless war.

America fighting against "enemies" is American as apple pie.

Domestically our "enemies"-at least to Dems- is everything relating to Trump.

On the reactionary right it's Immigrants and immigration, terrorists and terrorism.

Then to all there's deviants committing gun massacres in schools, work places, churches, shopping centers, theaters, concerts. All of which contributes to making Americans fearful.

To Dems Trump is evil incarnate. As if we haven't had self important narcissists, egotistical miscreants who also took the oath to defend the Constitution only to betray it as they saw fit. Repubs and Dems alike.

Antagonism toward immigrants-in this nation of immigrants-of course didn't begin with people from Central America. Earlier in the 1800's it was the Irish, later the Italian's, Poles, Jews, others from eastern Europe, also Chinese and Japanese immigrants.

The horror of slavery. Blacks from Africa brought here in chains. A civil war fought over it. Then after a short Reconstruction period that ended in 1877 some 87 years of Jim Crow segregation till the Civil Rights Act of 1964 and Voting Rights Act of 1965. Yet there's persistent institutionalized racism in real estate "red lining". Overt racism may no longer be expressed openly yet persists below the surface.

All this plus the genocide of the indigenous Indian peoples, stealing their lands then placing their ancestors on reservations (gulags?).

As for "us" today? We're the privileged descendants of those who committed those earlier atrocities-even if they aren't directly related to us.

The gun massacres happening more frequently in America can be traced to multiple factors including, but certainly not limited to:

Retired. The author of "DECEIT AND EXCESS IN AMERICA, HOW THE MONEYED INTERESTS HAVE STOLEN AMERICA AND HOW WE CAN GET IT BACK", Authorhouse, 2009
Related Topic(s): American Culture; Atrocities; Indifference; Wars, Add Tags
Add to My Group(s)
Go To Commenting
The views expressed herein are the sole responsibility of the author and do not necessarily reflect those of this website or its editors.