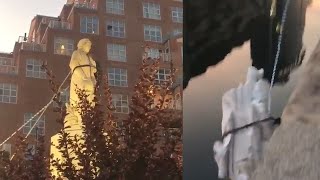 Baltimore protesters pulled down a statue of Christopher Columbus and threw it into the city's Inner Harbor.
(Image by YouTube, Channel: The Telegraph)   Details   DMCA

Christopher Columbus was sent to the bottom of the Inner Harbor in Baltimore. Stonewall Jackson has been removed from his pedestal in Richmond, Va. The Washington Redskins are considering changing their name. Can the Cleveland Indians and Atlanta Braves be far behind? The State of Mississippi is removing the Confederate-flag symbol from its state flag. Several members of Congress have asked the Army to rename any buildings and remove symbols at West Point that honor Robert E. Lee and any other Confederate officers.

America is getting a history lesson, many generations too late, and we owe it all to ... Donald Trump.

Sometimes life is weird. There's a school of thought that holds that humans learn the important lessons in life only by going through difficult, challenging, perhaps painful situations. Some call them "opportunities". The universe--your own personal one or the one we all share--is thought to like harmony. Everyone singing in tune, so to speak. But apparently it takes going through disharmony to get there. Otherwise, we don't pay attention and just go on thinking everything's fine. How much disharmony is necessary before we learn the lesson seems to depend on how well we pay attention in class. That is, do we notice the disharmony, understand what it really is, know what or who caused it and do we look for a solution a real, lasting solution, not a paper-over job that makes us feel good for awhile?

European settlers "claimed" (and named) America more than 500 years ago, killing and raping natives who already lived here. Disharmony. Over time, however, generations of European-Americans made amends for this grand theft, first by having a special dinner with native Americans and later calling it Thanksgiving, designating unwanted parcels of land for the tribes to call their own reservations, killing thousands more in Western movies that portrayed them as savage redskins (Oops! Sorry, Washington), ignoring tribal laws and customs that were inconvenient, letting tribes open gambling casinos and giving Columbus, the guy who started it all and gave the natives the name "Indians", his own holiday. We're square now, right, Chief?

While this lesson was slowly unfolding, dark-skinned natives of African nations were being kidnapped and brought to America to serve as slave labor for plantation owners in the south. These unwilling immigrants were bought and sold as property for generations, without rights and mostly without education. They were the backbone of the American economy. Still, many Americans, mostly in the north, were not OK with slavery. Eventually, after much disharmony, a civil war broke out over it, President Abraham Lincoln issued the Emancipation Proclamation, freeing the slaves, and the north won the most brutal war this nation has ever fought. A divided nation was rejoined and a semblance of harmony was restored.

Now free, blacks nonetheless continued to live as second-class citizens throughout the segregated South for about 100 years. The 1960s brought another revolution. Marches, demonstrations, violence, death. But President Lyndon Johnson muscled the Civil Rights Act through a contentious Congress. Voila! No more segregation. Schools were integrated. Everyone was "equal". Wow, it was about time, Americans agreed. We're good now, right, bro? Hey, you want to play football at our college?

At the same time, however, many southerners also said let's not forget those courageous generals who led the Confederacy's fight to maintain slavery, even in a new nation if need be. Let's erect statues praising them everywhere we can think of. And don't you just love that Confederate flag? Live and die for Dixie. Uhh, also, we don't really need to rush with this "all men are equal stuff", do we?

So everything was cool, no more separate water fountains or schools. No more use of the "N" word, at least not publicly. No more profiling of people of color by police, well at least not officially. America was now, finally, a color-blind nation. It had to be. After all, it was the law. Harmony was mandated.

Then along came Trump, a man who never read a history book, indeed could barely read at all. The Republican Party, which had become the favorite hiding place for all those white Americans who would still be slaveholders if it was allowed and who still had no problem with separate water fountains and who apparently never learned what the Civil War was about, made Trump its presidential candidate. Americans, in their wisdom, and with the considerable help of Russia and an antiquated electoral system, elected Trump.

It turned out a lot of Americans didn't like the Democratic candidate because she was a woman and she was smart and tough and knew more about the job of president than Trump and all the would-be Republican candidates put together. Vote for Trump, they said. He'll shake things up in Washington.

And they were right.

A man who operates solely out of self-interest, Trump's primary "governing" tools are chaos and vindictiveness, which he wields as weapons. In his effort to "Make America Great Again" (as in, before the Civil Rights Act), he has destroyed international alliances, stoked bigotry against all non-whites, encouraged violence including by police against peaceful protest and made it safe in the minds of his racist followers to come out of the woodwork to spew their hatred. There is a crisis of conscience in America every day. The evidence is in the news media, which he has labeled "the enemy of the people".

Evangelical Christians claim Trump was sent by some God to save them, but not necessarily the rest of us. The Rapture notwithstanding, I'm working on that need-for-harmony thesis. I'm thinking Trump may be the inevitable result of a universe frustrated with our inability to learn the lesson.

Major change sometimes requires major pain. Having dozens of videos of police brutality against people of color splashed across social media helps. So does having an inept "leader" who flouts the law, promotes racism and violence, and lies on a daily basis. He is disharmony personified. We don't need history books for this; we're living it.