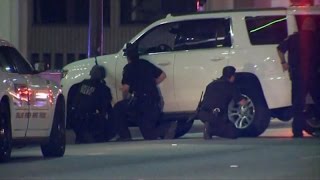 You said: "All of us as Americans should be troubled by the shootings."

All of us are. To make matters worse, 12 police officers have apparently been shot in Dallas at a demonstration to protest the shootings. Reportedly five of them are dead.

Attorney General Lynch is the best-positioned person in the nation to confront excessive police violence. As the head of the Department of Justice she has more powerful tools at her disposal than any other law enforcement officer in the nation. But she will not use the power that she has.

Instead, she and Vanita Gupta, who heads the department's Civil Rights Division, launch investigation after investigation for political cover, always deciding in the end not to proceed with charges.

Yes, for the record, Civil Rights charges in many of these cases can be brought. Most recently in the case of black Chicago police officer Aldo Brown. Brown was in fact charged and convicted on Civil Rights charges for beating a suspect armed with a gun, in violation of the constitution.

So it can be done. Neither of your Attorney General appointees however has ever chosen to do it. So here we are in the middle of a bloodbath that can only be mitigated by justice. Not justice for some, but justice for all.

I've said it before, most recently in January of this year, you and Attorney General Lynch must act. Until you do that, the violence is going to continue to escalate. This is a problem that cannot be solved at a podium. It must be confronted with federal authority when local jurisdictions cannot or will not act. You must.

It will only get worse until you do.

Related Topic(s): Attorney General Loretta Lynch; Dallas Shootings; Domestic Violence; Police; President Obama, Add Tags
Add to My Group(s)
Go To Commenting
The views expressed herein are the sole responsibility of the author and do not necessarily reflect those of this website or its editors.