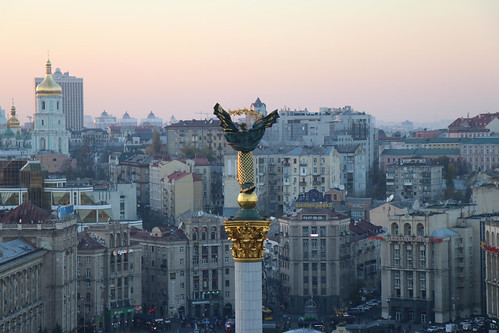 Independence monument. Maidan Square, Kiev. Ukraine
(Image by jafsegal (Thanks for the 4,5 million views))   Details   DMCA
Donald Trump is full of rage and fear at having fallen so far and so fast. After surviving the Mueller report unscathed, he thought he was home free and that he had added the White House to his world-wide collection of Trump buildings. Yet now he's looking at impeachment for doing what he believes to be the same sort of thing that (then) Vice President Joe Biden got away with in Kiev in 2015.

Remember the Mueller report? It was the product of an investigation lasting nearly two years at a cost of at least $32 million. The Justice Department released the full redacted version on April 18, 2019. Then, on May 6, more than 800 former federal prosecutors, Republicans and Democrats from all over the nation, signed an open letter saying: "Each of us believes that the conduct of President Trump described in Special Counsel Robert Mueller's report would, in the case of any other person not covered by the Office of Legal Counsel policy against indicting a sitting President, result in multiple felony charges for obstruction of justice." (The number of signatories now stands at 1027.)

Obstruction of justice is a major felony, especially when committed by those in government. It erodes confidence in the justice system and rule of law. A president who commits this crime repeatedly is a serious threat to the nation. The facts were all in, fully documented. No further investigation was needed for the House to impeach (i.e. indict) Trump. Yet Nancy Pelosi and the Democratic leadership stalled, settling for further committee investigations that were obstructed by the White House's refusal to cooperate and buried under an avalanche of Trump tweets.

Pelosi's timidity makes her partly responsible for the damage Trump has done in the past six months. She enabled him post-Mueller to feel free to abuse his power here and abroad. Although Ukrainegate is bad, the worst abuse will likely be his impulsive decision to allow the Turks to invade northern Syria and attack our Kurdish allies.

On Sept. 24 Trump admitted publicly that, in a July 25 phone call he had asked Ukrainian President Zelensky to investigate the actions of his election opponent, Joseph Biden, in Ukraine. This was the tipping point for Pelosi and Democrats who had not yet called for impeachment. That same day she formally announced an impeachment inquiry: "The actions of the Trump presidency revealed the dishonorable fact of the President's betrayal of his oath of office, betrayal of our national security and betrayal of the integrity of our elections."

On Sept. 25, the White House released a redacted summary of Trump's phone call to Zelensky, and on the 26thit released the well-documented text of a whistle-blower complaint regarding the phone call. All this had many Democrats sounding very confident and relieved-they believed the long awaited gotcha moment had at last arrived. Trump's public admissions, his blanket obstruction of the impeachment inquiry, polls showing an increase in public support for impeachment, daily revelations of Giuliani's involvement, testimony from insider witnesses and the growing coarseness of Trump's tweets and televised comments all suggest that Trump's reckoning is near.

But Ukraine as a basis for impeachment is much more hazardous for Democrats than the Mueller report would have been in combination with the former prosecutors' open letter. Ukraine was the scene of a violent American-supported coup that expelled the democratically elected Ukrainian President Yanukovych in February of 2014. Joe Biden was Obama's "point person " in dealing with the newly installed American-approved government.

In a 2015 visit to Kiev, Biden pressured the new government to dismiss Viktor Shokin, the Prosecutor General of Ukraine by threatening to block a $1 billion loan guarantee. Shokin had been in charge of investigating corruption at Burisma Holdings, a giant Ukrainian energy corporation. Biden's son Hunter was on Burisma's board of directors from 2014 to 2019, "earning" $50,000 a month . Trump and his supporters claim that Biden used the power of his office to shield his son from corruption charges by getting Shokin fired. Thus, Biden's behavior was the moral equivalent of what Democrats accuse Trump of doing.

The majority view of the liberal mainstream media seems to be that there is no evidence of illegal conduct by Hunter Biden, and as CNN puts it, "There is no evidence Hunter Biden was ever under investigation." As James Risen wrote in the Intercept (9/25/19), Biden wanted Shokin's ouster "because Shokin had blocked serious anti-corruption investigations, not because he was investigating Burisma." If Hunter Biden had engaged in corruption, replacing Shokin with an honest prosecutor would have endangered rather than helped him.

However, this absolution of Hunter Biden doesn't address a deeper problem. Why was Hunter recruited to the board of Burisma right after the overthrow of Yanukovych, when the U.S. and its proconsul, Biden Sr., began to dominate the economic and military plans of the new government? Burisma and its co-founder, wealthy oligarch Mykola Zlochevsky, were being investigated for corruption in 2014. As the Washington Post explained , adding prominent connected people such as Hunter Biden to the Burisma board "sent a message internally in Ukraine that Zlochevsky had access to powerful people in the West."

What did Joe Biden, Obama's point person for fighting the massive corruption in Ukrainian political affairs, think of his son joining the board of a dodgy mega-corporation run by a sleazy oligarch? Even if ousting Shokin might have reinvigorated the prosecution of corruption in Ukraine, wouldn't the presence of Biden's son on the board shield Burisma?

Biden, as Obama's proconsul in Ukraine, should never have allowed his son to serve on the Burisma board. I don't know which is more damning, that Biden spoke the truth or that he lied when he insisted that he never discussed the issue with his son. This scandal adds to the many reasons why Joe Biden should not be the nominee of the Democratic Party.

Related Topic(s): American Foreign Policy; Burisma; Corruption; Impeachment; Trump; Ukraine; Ukrainian Uprising, Add Tags
Add to My Group(s)
Go To Commenting
The views expressed herein are the sole responsibility of the author and do not necessarily reflect those of this website or its editors.