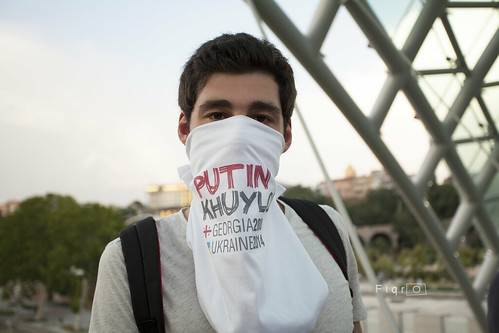 Since autumn 2018, Georgian social networks and online-stores have been flooded with ads of T-shirt saying "20% of my country is occupied by Russia". The players of the football clubs Torpedo Kutaisi and Locomotive Tbilisi wore them before the start of the games in June this year. These T-shirts have become a feature of the protests. The wave of patriotism over anti-Russian sentiment marked the beginning of the election campaign between Georgia's government and opposition forces.

The protests have hardly started, the leading party Georgian dream accused Saakashvili's party United national movement of "provocations". There have also been talks about foreign interference. Let's look back to the recent past to find out whether it can be true.

In February 2019, U.S.-based NGO Free Russia Foundation opened office in Georgia's capital city of Tbilisi. The organization was founded by Russians abroad in 2014. The Board of Directors consists of former Assistant U.S. Secretary of State for Democracy, David J. Kramer, and former U.S. Ambassador to Georgia, Ian Kelly, among others. Both are democrats. Yet in 2015, at the Committee hearings, Kelly said the phrase Russia occupied 20% of Georgian territories that would become a slogan of Tbilisi protests four years later.


The Free Russia foundation in Georgia is headed by Egor Kuroptev, Russian journalist who has been producing a talk-show "Border Zone", known by its anti-Russian rhetoric. In this capacity, he regularly holds meetings and interviews with high-level Western politicians. Only for the last year, Kuroptev talked to the Commander of NATO's Allied Maritime Command, Vice Admiral Clive Johnstone, Under Secretary of State for Arms Control and International Security Affairs, Andrea Thompson, and head of NATO Liaison Office in Georgia, Rosaria Puglisi.


Besides, Kuroptev has close ties to the opposition "United National Movement" party, founded by Saakashvili. The head of The Free Russia foundation in Tbilisi is surrounded by the main opposition figures interested in a shift of power in Georgia.


In June, 2019, a few days before the protests kicked off, former deputy assistant secretary of defense and now senior director of the Biden Center for Diplomacy and Global Engagement at the University of Pennsylvania, Michael Carpenter, had arrived in Georgia. During his visit, the democrat gave an exclusive interview to Kuroptev, emphasizing that it is important for the U.S."to help Georgia" and "point the government the direction of the Euro Atlantic integration".

A few days before the interview with Carpenter, Kuroptev met Ramin Bairamov, a member of "United National Movement", in Kiev. Bairamov had just returned from Poland, where he had visited the office of The Helsinki Foundation for Human Rights, partly financed by Soros' Open Society Foundation. "Get inspired with new ideas and perspectives", Bairamov praised the Helsinki Foundation's activity in Georgia.


Amid Bairamov, other members of Saakashvili's party or related persons have emerged on Georgia's political scene at that time. Ex-president's wife, Sandra Roelofs, is among them. She also met the head of FRF Georgia in June, before and after the protests.


Once the actions have been coordinated, there was a little left to do to find a trigger. It was well-known that the session of Inter-parliamentary Assembly on Orthodoxy was to be held in Tblisi on June, 20 and that, according to proceedings, Russian delegate Gavrilov, who headed this year's session, was to preside over a meeting in the plenary hall of Georgia's Parliament. The orchestrators used this very situation as a pretext. They presented it in a nepherous way, stirred up the crowd, pressed the government to show its weakness.


Journalists and media outlets, somehow related to Washington and Kuroptev, were fully prepared to cover the protests.


Among them are two reporters who come forward. Ekaterina Kotrikadze and Nikolai Levshits. Kotrikadze, Kuroptev's ex-wife, is Deputy Editor-in-Chief of RTVI in New York. She also was chosen to lead the propaganda Caucasian news channel PIK, created with Saakashvili's consent and shut down after the parliamentary elections of 2012.

In 2013, Kotrikadze got credentials at the foreign press center of the U.S. state department. Another Free Russia Foundation activist, Nicolai Levchits, was at the forefront of the Russian opposition before moving to Georgia in 2018. His Facebook page contains a very detailed report about the Tbilisi protests as well as information on his meeting with David Kramer and Sandra Roelofs before the protests.
Amid partisan media and journalists, the actions implicated Western think tanks in Georgia, that had prepared the ground for anti-government sentiment.

Thus, International Republican Institute (IRI), which has close ties to the U.S. State Department, has conducted a survey of public opinion in Georgia before the protests.

I am a Georgian law expert currently living in Belgium. Trying to analyze the news
Related Topic(s): Democracy; Demonstrations; Politics; Protest; Provocation; State, Add Tags
Add to My Group(s)
Go To Commenting
The views expressed herein are the sole responsibility of the author and do not necessarily reflect those of this website or its editors.

US Meddling in Georgia-Russian Relations