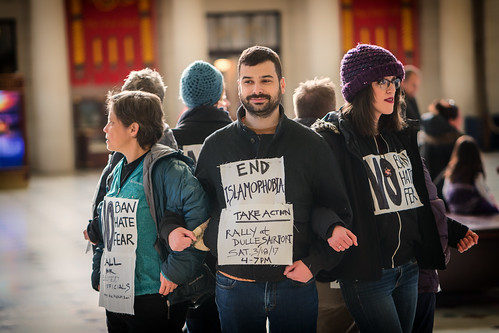 The seven-million strong American Muslim Community was alarmed at the killings of worshippers in Virginia and the British capital, London.

The Washington Post reported Monday (June 19) police found remains of a missing Virginia teenager who was assaulted and disappeared overnight after leaving a mosque in the Sterling area, and a 22-year-old man has been charged with murder in connection with the case.

The mosque, the All Dulles Area Muslim Society (ADAMS) in Sterling, and relatives identified the girl as 17-year-old Nabra Hassanen of Reston. Fairfax County police identified the man charged with murder in her death as Darwin Martinez Torres of Sterling, the Washington Post reported.

And across the Atlantic, in the British capital, London, one man died and 10 others were injured when a man drove a van into worshippers leaving a London mosque after prayers early on Monday (June 19).

Witnesses said the van driver was a "large white man", who was apprehended by members of the public soon after the incident near Finsbury Park. He was quoted as shouting: "I want to kill all Muslims."A man, who was already being given first aid at the scene before the van rammed the pedestrians, has died. At least two of the injured are in a very serious condition.

The Washington Post said the Virginia killing rattled the Muslim community in the midst of celebrating Ramadan, a month of religious observance in which adherents fast from dawn to sunset.

ADAMS is Northern Virginia's largest mosque and, with 11 chapters around the District and Northern Virginia. According to ADAMS's website, the Sterling location is 25,000 square feet and can accommodate more than 700 people. It includes a youth weekend school, a gymnasium and multipurpose hall, the site says.

The ADAMS Center has a paid armed security guard at the Sterling site, according to Arsalan Iftikhar, an international human rights lawyer. He said many mosques have increased security since six Muslim worshipers were killed at a mosque in Quebec earlier this year.

Rep. Barbara Comstock (R-Va.) said she visited ADAMS Sunday and met with leadership and law enforcement officials. "We are heartbroken and horrified by the news of the brutal murder of a beautiful 17-year old girl," Comstock was quoted as saying by Washington Post.

The congresswoman represents Virginia's 10th District, where the mosque is located. "We know there is no greater pain for any parent and I extend our prayers to her family and loved ones at this difficult time and the entire ADAMS Center community," she said.

Virginia Lt. Gov. Ralph Northam (D) said he and his wife, Pam, were "deeply disturbed" by the assault and killing. "There is absolutely no place for this kind of violence in our Commonwealth," Northam said in a statement. "Every Virginian should feel safe and welcome in our communities, and no parent should ever have to experience such a heartbreaking tragedy."

Virginia Attorney General Mark R. Herring (D) echoed Northam, urging Virginians to show compassion and kindness. "The ADAMS Center has always welcomed me and so many in Northern Virginia like family," Herring said. "This unspeakable attack feels like an assault on our entire community. Words fail at a time like this, so we'll all have to do the best we can to surround them with the love and support they've always shown each of us."

While condemning the death of 17-year-old Nabra Hassanen, the Council on American-Islamic Relations (CAIR) pointed out that an unprecedented spike in hate incidents targeting Muslims -- and particularly Muslim women - and other minority groups since the November 8, 2016 election.