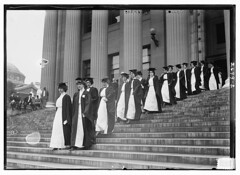 According to a recent report, Americans aged 25-34 have attained less education than their parents' generation.....

....The report doesn't really try to guess why this lower educational attainment and lowering interest in science, math, and engineering degrees have come about, but does note that tuition has increased at a pace that may make an education a non-option for many. Indeed, between 1958 and 2001, tuition increased at about double the rate of inflation.....Source: AlterNet.org

The recent report stating that American children are not achieving the same educational levels as their parents doesn't answer why this is happening. But the report points to the likely cause of the problem.

So I am going to directly and pointedly give the answer to why our children are not reaching the same educational levels as their parents.

The reason is simple.

The cost of higher education is beyond nearly everyone's reach unless they go deeply in debt. Then there is the problem that the cost of that higher education is not translating into a higher paying job when out of school. So as the economy sits at depression levels of unemployment, it is not a good bet that the masses of young people will want to go deeply into debt to graduate and find little or no work. Or to graduate and find that they are overly qualified and overly trained for a job that they could have had without the higher education. Or even to find that their higher education excludes them from many lower paying jobs, thus leaving them without any job.

The problem of kids turning away from higher education is a systemic issue and is related directly to the economics of becoming educated.

Here in New Mexico, we have a 'Lotto' scholarship that is helping students attain higher education without bankrupting them. My daughters have been fortunate enough to take advantage of this social program that not only helps young people and their families but will reap great benefits for society in the future.

An educated and informed citizenry is the foundation of a functional democratic society. I wish we had one. But some day, maybe, America will become a functional democratic society and for that we need an educated citizenry. Providing quality higher education to individuals that want to learn should be one of the highest priorities of a civilized society.

I know the NeoCons and their leadership here in America would like to have people generally dumbed down and stupid so they can't see what is really happening. But for the rest of America that understands that education is a quality of life issue and an important ingredient to a highly functioning and successful country and economy, an investment in educating our people is an investment that will reap benefits in every aspect of society in the future.

We could easily educate all those that want a higher education if we would decide to disband the Empire and disband corporate welfare.

Come to think of it, we could not only give everyone higher education but we could give them health care, get rid of hunger, stamp out poverty, transform the inner cities, provide healthful and beneficial societal programs, create a green economy, provide fast, efficient public transportation, and create an America that works for everyone.

Or, we can keep pumping nearly half of our taxes into war and the preparation for war, and we can keep bankrupting society to the wealthy financial class that presently runs it.

I know its a hard choice.

But think about it.

Related Topic(s): Depression; Economics; Education; Education; Parents, Add Tags
Add to My Group(s)
Go To Commenting
The views expressed herein are the sole responsibility of the author and do not necessarily reflect those of this website or its editors.