The word "corruption" cannot fully embrace how this insulting megalomaniac is tearing apart our country, our democratic practices, and our moral norms. Who will put a stop to this president's corrupt rampage against the American people? 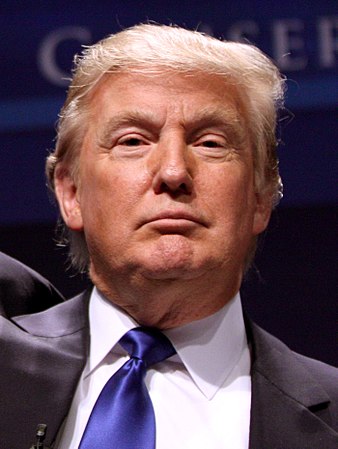 Delusionary, dictatorial Donald Trump is drunk on power. Trump's monarchical and lawless actions are a clear and present subversion of our Republic and its Constitution. As soon as the impeachment trial ended and Trump was acquitted by the Senate's supine Republican courtiers (except for Senator Mitt Romney), vengeance flooded Trump's fevered mind.

Ignoring warnings from his advisers, Trump is lashing out in all directions, unleashing torrents of foul-mouthed tweets. Note with alarm how this American Fuhrer is consolidating control and using his presidential power to smash all opposition. Remember that last July Trump declared "I have an Article II, where I have the right to do whatever I want as President." He wasn't kidding, America.

Trump is shocking his current appointees -- in addition to those who have quit or been fired in purges. Without evidence, he is accusing the intelligence agencies and the FBI of conspiring against him! Trump has attacked both the Justice Department and Attorney General William Barr because of the sentencing recommendations by four DOJ prosecutors for convicted criminal and Trump adviser Roger Stone. Barr, a Trump toady, was shaken. Barr said it would be impossible for him to do his job if Trump kept interfering.

As Mark Green and I depicted in our new book -- Fake President: Decoding Trump's Gaslighting, Corruption, and General Bullsh*t loser Trump always retaliates against opponents by charging fraud, fakery, and crookery. Trump's intimidation of others is amplified by the media that gives no right of reply to Trump's targets.

What is most troubling are the silences of the countervailing forces that Americans have a right to rely on to fight Trump the tyrant.

Post acquittal, Trump has doubled down on his numerous impeachable offenses (see the Congressional Record from December 18, 2019, page H 12197). But Democrats, who control the House, are not doubling down on their impeachment investigations. Instead, they are following orders from Speaker Pelosi and standing down.

Trump regularly attacks the judges who rule against him or dare to challenge his illegal acts. Yet there is only silence by the many judge's associations and the many bar associations. The American Bar Association, which has over 194,000 members, remains asleep. All of its members, so-called "officers of the court," are attorneys and should understand their responsibilities to uphold the rule of law.

Trump's Party has a long history of vicious voter suppression (chronicled in the new documentary, Suppressed: The Fight to Vote, by Robert Greenwald). These anti-democratic actions should be considered serious crimes. However, the members of the National Association of Secretaries of State (NASS) are largely unprepared to protect voter rights and accurate counting of votes. Some Secretaries of State are aiding and abetting these electoral crimes. Current Georgia Governor Brian Kemp used his power as Georgia's Secretary of State to suppress black voters, cheating his way to the Governor's mansion in 2018.

Trump is now doing what all dictators do when they take power: he is purging the civil service of any critical voices of those who simply want to do their jobs. These civil servants made the "mistake" of enforcing health and safety laws that the supreme leader wanted to go unenforced to benefit the President's big corporate buddies and donors. The government employee unions are not doing enough to fight back and explain what Trump the tyrant is doing to harm people -- Trump voters and anti-Trump voters alike. Trump and his cronies are making America more dangerous again by scuttling protections that reduce deaths, injuries, and illnesses.

Whether it is the air you breathe, the water you drink, the vehicles you ride in, or the toxins in your workplace, Trump's corporatist wrecking crew is running federal agencies into the ground. While corporate outlaws fill Trump's coffers and hotels with riches, he gives them huge tax escapes and starves infrastructure. The word "corruption" cannot fully embrace how this insulting megalomaniac is tearing apart our country, our democratic practices, and our moral norms. Protections for children, the elderly, veterans and workers are all on Trump's chopping block.

Who will stand up to this horrible bully who is intent on rolling back America's gains and the anti-monarchy purpose of the American Revolution itself? Some in the media will sound the alarm. Sensing this threat, Trump interfered with government procurement to tilt a large contract away from Amazon because Jeff Bezos owns The Washington Post, which has run many articles about Trump's rampage. Trump's Republican campaign committee just filed a loser suit against The New York Times. Whether Trump wins or loses, the intimidation of the media is his goal.

These tactics are working on Chairman Jerome Powell and the Federal Reserve, according to former Fed insiders. As a result, the Federal Reserve has stayed committed to lowering interest rates to the detriment of savers. Intimidation is also working on the House of Representatives Democrats, who abhor the lives ruined by the savage sexual predator. Sadly, these lawmakers are not demanding a House Judiciary investigation of Trump's treatment of women. Credible tort lawsuits are being delayed by Trump's lawyers.

Related Topic(s): American Capitalism; American Facism; American Foreign Policy; Donald Trump; Donald Trump Narcissist; Donald Trump Versus The Constitution; Megalomaniac; Trump Bigotry, Add Tags
Add to My Group(s)
Go To Commenting
The views expressed herein are the sole responsibility of the author and do not necessarily reflect those of this website or its editors.