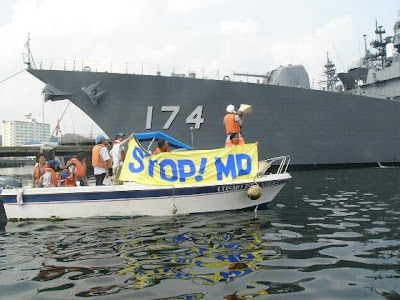 U.S. Secretary of War Leon Panetta is making a tour of the Asia-Pacific where he is pumping up the next military conflict.  Yesterday I heard he was in Vietnam trying to close a deal to allow the U.S. Navy to once again have access to the base at Cam Ranh Bay.

Before leaving on this trip Panetta made the speaking rounds back home to consolidate U.S. media and build public support for Obama's "pivot" into the Asia-Pacific.  "One of the key projects that your generation will have to face is sustaining and enhancing American strength across the great maritime region of the Pacific," he told graduates of U.S. Naval Academy at Annapolis, Maryland last week.

While in Singapore Panetta stated, "By 2020, the Navy will re-posture its forces from today's roughly 50/50 percent split between the Pacific and the Atlantic to about a 60/40 split between those oceans.  That will include six aircraft carriers in this region, a majority of our cruisers, destroyers, littoral combat ships, and submarines....to project power and operate in the Asia-Pacific."

He told an audience of Asian military officials that the U.S. planned new investments in capabilities needed "to project power and operate in the Asia-Pacific," including radar-evading fighter jets, a new long-distance bomber, electronic warfare and missile defenses.  The message to them is essentially - play along with us and we will share a piece of the action with you.

The Pentagon has a name for this new strategy - its called the AirSea Battle fighting "concept".

This strategy is of course the primary reason that the South Korean Navy, at the behest of the Pentagon,  is building the Navy base on Jeju Island.  The U.S. Navy needs more ports to dock their warships.

Not everyone though is getting on-board this dangerous, provocative, and expensive Obama plan. "AirSea Battle is demonizing China," retired Gen. James Cartwright, former vice-chairman of the joint chiefs of staff, said last week. "That's not in anybody's interest."

V-P Joseph Biden got the West Point gig and he told the Army cadets that the U.S. would now "rebalance" its foreign policy with greater emphasis on the Asia-Pacific.

The Obama team is making the rounds to sell this new policy.  They know the American people are "war weary" so they must begin to create the fear of a growing new threat in the Asia-Pacific - namely China.

Panetta put the name to it when he spoke to the Naval cadets in Annapolis.  He called this new mission a "great challenge" and a "security burden to advance peace".

It's the old white man's burden stuff once again.  American exceptionalism to the rescue.