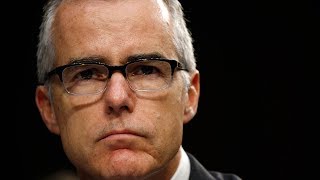 FBI's former acting director Andrew McCabe outlines concerns about Trump
(Image by You Tube)   Details   DMCA
Speaking in the first person, I personally find Andrew McCabe's current degree of disclosure somewhat refreshing. The FBI, the CIA, and the U.S. Intelligence community, et al., have a generational credibility problem rooted in a disdain for transparency. So any reform in that regard, intended or unintended, feels constructive.

THE FBI, the CIA, and the entire federal law enforcement and combined national intelligence communities have for so long been averse to even the most reasonable forms of public disclosure that now, when they need the public's support most, they struggle to gain it.

There are always good reasons for "operational security" or "not commenting on ongoing cases," but now when a real crisis arises that they need public support to confront they find themselves talking to a public they do not know. The good will tours are actually helping, but a fundamental shift in attitudes toward transparency and public disclosure are long overdue, and time is running out.

While McCabe's unexpectedly candid accounts of discussions between Department of Justice officials depict Acting Attorney General Rod Rosenstein in a somewhat awkward light, McCabe certainly doesn't describe any illegal action on the part of himself, Rosenstein, or any of the officials engaged in those discussions. And he does come across as fairly credible.

The right-wing propaganda machine is shrieking "coup attempt." But the available facts don't support that. The 25th Amendment (TFA) specifically contemplates and provides the framework for executive cabinet members to act in concert to remove a president from office if, in their judgment, the president is unfit. That is the express purpose of the TFA. Even if it isn't convenient for Sean Hannity and Ann Coulter on this occasion.

While the TFA statute does not define a role for Justice Department officials, it doesn't preclude discussion between Justice Department officials and executive cabinet members on the subject particularly in light of a unified consensus on the part of federal law enforcement that the president was aided in gaining the office by a hostile foreign power. In short, McCabe, Rosenstein, and the other DoJ officials had the legal right to discuss urging cabinet members to implement the TFA, in addition to discussing all available evidence-gathering techniques, including electronic surveillance.

What is more at issue than federal law enforcement overreach is presidential immunity. Donald Trump is giving America an object lesson in how difficult it can be to hold an American president accountable under the law for any conduct he or she might engage in, regardless. If Donald Trump, with all the evidence of wrongdoing on his part in the public record, is legally untouchable as president, then no president can or will ever be held accountable for anything. This is the defining test case on presidential immunity. If Trump can't be brought to justice, then no president will ever be.

Donald Trump is arguably less the victim of a coup than either Hillary Clinton or Al Gore were. Both won their election; neither was allowed to serve. So those would be examples of Constitutional coups, perhaps. In Hillary Clinton's case, the advent of a hostile foreign power's efforts to sway the election to her opponent actually does cast doubt on the legitimacy of that entire election. So it begs the question: is Donald Trump being removed from office by a coup, or being allowed to serve as a result of a coup?

There has only been one verified coup on U.S. soil in the nation's history. It's come to be known as the Wilmington Massacre. It wasn't pretty. In 1898, white supremacist Democratic political activists in Wilmington, North Carolina, incensed by what they viewed as a Republican civic leadership too liberal and too cooperative with black residents and community leaders, decided they'd had enough and made plans to do something about it.

What followed was a white riot, the destruction of the town's black-owned newspaper, the armed overthrow of the liberal, black-friendly government, and the murder of scores of black residents. White estimates put the number of killings in the teens. Black estimates put the numbers in the hundreds. One thing is certain, it was black bodies that ended up in the Cape Fear River.

It's not surprising that McCabe, Rosenstein, or anyone else in the nation's capital was discussing the TFA, its implementation, or what steps should be taken to defend the country from a president beholden to a foreign power. Everyone in Washington was during that time frame. But it wasn't a coup, no matter how loudly modern, white-supremacist Republican political activists may howl.

Related Topic(s): American Facism; American Presidents; American_History; Coup, Add Tags
Add to My Group(s)
Go To Commenting
The views expressed herein are the sole responsibility of the author and do not necessarily reflect those of this website or its editors.