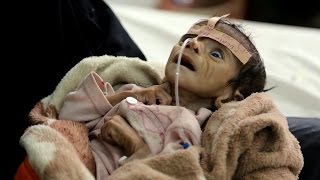 "USA Kills Yemeni People," screams graffiti plastered on walls in Yemen's capital Sana'a. The Yemeni people who have been on the receiving end of US bombs dropped by Saudi pilots know all too well that the United States is complicit in their suffering.

The intense anti-US sentiment in Yemen should be a wake-up call for Americans: if you don't care about the millions of suffering Yemenis, you might think about the future blowback.

Two US Senators, the Republican Rand Paul and the Democrat Chris Murphy, understand full well the implications and have been trying to halt the weapons sales. "The United States has no business supporting a war that has only served to embolden our terrorist enemies, exacerbate a humanitarian crisis, and incite fear and anger among the Yemeni people toward the United States. This will come back to haunt us," warned Murphy.

Unfortunately, the Trump administration and the majority of US senators have failed to heed their call. On 13 June, their resolution to stop the Saudi sale of precision-guided munitions was narrowly defeated by a 53-47 vote.

The vote broke down mainly along party lines, with four Republicans and five Democrats breaking ranks. It also broke down along another divide: peace and humanitarian aid groups vs the Trump administration, lobbyists for the Saudi government and the weapons industry.

Paul, an anti-interventionist Republican pushing the resolution, railed against the senators who were more concerned about the jobs the weapons manufacturers could generate than the lives of Yemeni children. "I am embarrassed that people are talking about making a buck while 17 million people are threatened with famine," he said.

He didn't mention that many of the senators, Democrats and Republicans alike, have taken tens of thousands of dollars in campaign contributions from the same corporations benefiting from the sales.

Despite the loss, the vote reflected an unprecedented level of Senate opposition to the sale. A similar effort during Obama's presidency failed 71-27. "Today's vote total would have been unthinkable not long ago, but Congress is finally taking notice that Saudi Arabia is using US munitions to deliberately hit civilian targets inside Yemen," Murphy said.

The more cynical interpretation would be that Democrats are more willing to criticize Saudi weapons sales under a Trump administration than under a Democratic one.

Yemenis are desperate to end this conflict, now in its third year. Nearly 19 million people require assistance and 6.8 million are at risk of famine. This has been compounded by a cholera outbreak that has surpassed 124,000 cases and is projected to double every two weeks. Almost half the country's medical facilities have been destroyed. A Yemeni child dies every 10 minutes from the combined effects of hunger and lack of medical facilities.

Saudi forces have targeted farms, food facilities, water infrastructure, marketplaces, and even the port of Hudaidah, where most of the humanitarian aid was entering the country. Meanwhile, extremist groups such as al-Qaida and Isis have seized upon the chaos to expand their reach.

US backing for the Saudi-led intervention against the Yemeni Houthi rebels is not new. But after Saudi Arabia bombed a funeral procession in October 2016 that resulted in 150 causalities, the Obama administration put a halt to the sale of munitions that would be used in Yemen and pulled back on US logistical support.

Donald Trump has been quick to resume weapons sales, bragging about clinching an enormous $110bn deal during his trip to the kingdom in May. With the growing chorus against US support to the Saudis, the royal family promised Trump that their military would undergo rigorous US training to reduce civilian casualties, signing a $750m training program.

The Saudis also agreed that US advisers would sit in their air operations control center; previously, only a small US team was allowed to operate from another office to coordinate logistical assistance.

Related Topic(s): Arming Saudi Arabia; Bombing; Suffering; Yemen Destruction, Add Tags
Add to My Group(s)
Go To Commenting
The views expressed herein are the sole responsibility of the author and do not necessarily reflect those of this website or its editors.