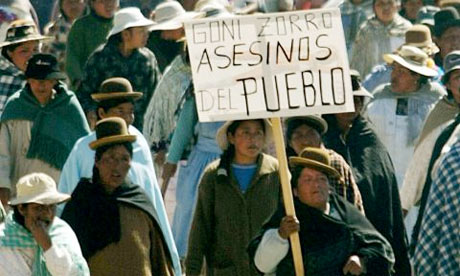 (Image by Unknown Owner)   Details   DMCA
Thousands of Bolivian Indians rallying in La Paz to demand the resignation of President Gonzalo Sanchez de Lozada, 16 October 2003. The sign reads, "Goni, Zorro, murderers of the people," in reference to the president and his defense minister. Photograph: Reuters/Carlos Barria

In October 2003, the intensely pro-US president of Bolivia, Gonzalo Sanchez de Lozada, sent his security forces to suppress growing popular protests against the government's energy and globalization policies. Using high-powered rifles and machine guns, his military forces killed 67 men, women and children, and injured 400 more, almost all of whom were poor and from the nation's indigenous Aymara communities. Dozens of protesters had been killed by government forces in the prior months when troops were sent to suppress them.

The resulting outrage over what became known as "the Gas Wars" drove Sanchez de Lozada from office and then into exile in the United States, where he was welcomed by his close allies in the Bush administration. He has lived under a shield of asylum in the US ever since.

The Bolivians, however, have never stopped attempting to bring their former leader to justice for what they insist are his genocide and crimes against humanity: namely, ordering the killing of indigenous peaceful protesters in cold blood (as Time Magazine put it: "according to witnesses, the military fired indiscriminately and without warning in El Alto neighborhoods"). In 2007, Bolivian prosecutors formally charged him with genocide for the October 2003 incident, charges which were approved by the nation's supreme court.

Bolivia then demanded his extradition from the US for him to stand trial. That demand, ironically, was made pursuant to an extradition treaty signed by Sanchez de Lozada himself with the US. Civil lawsuits have also been filed against him in the US on behalf of the surviving victims.

The view that Sanchez de Lozada must be extradited from the US to stand trial is a political consensus in Bolivia, shared by the government and the main opposition party alike. But on Friday night, the Bolivian government revealed that it had just been notified by the Obama administration that the US government has refused Bolivia's extradition request:

Related Topic(s): American Exceptionalism; American Foreign Policy; American Hypocrisy; Bolivian Revolution; Extradition; Genocide, Add Tags
Add to My Group(s)
Go To Commenting
The views expressed herein are the sole responsibility of the author and do not necessarily reflect those of this website or its editors.