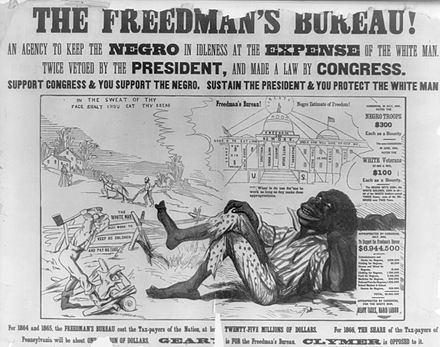 Freedman%27s bureau.
(Image by Wikipedia (commons.wikimedia.org), Author: Author Not Given)   Details   Source   DMCA
In his new book, White Too Long: The Legacy of White Supremacy in American Christianity, Robert P. Jones begins with the assertion, "The [Southern Baptist] Christian denomination in which I grew up was founded on the proposition that chattel slavery could flourish alongside the gospel of Jesus Christ. Its founders believed this arrangement was not just possible but also divinely mandated."

Dr. Jones lifts the book's title, "white too long," from a passage written by James Baldwin in The New York Times on February 2, 1969: "I will flatly say that the bulk of this country's white population impresses me, and has impressed me for a very long time, as being beyond any conceivable hope of moral rehabilitation. They have been white, if I may so put it, too long""

Dr. Jones, the CEO and founder of the Public Religion Research Institute, cites the example of Reverend Basil Manly Sr., who not only was president of the University of Alabama, but also a founder of the Southern Baptist Convention (SBC). Manly was "the chief architect of the withdrawal of Baptists in the South from cooperative fellowship with their northern brethren over the issue of slavery. " It was part of a larger split that fractured virtually every Protestant denomination.

"Manly asserted forcefully an unapologetic theology of white supremacy, arguing that slavery was not an unfortunate necessity but rather part of the divinely ordained hierarchical order of Christian society." He subsequently engaged in treasonous activity by working to push Alabama to secede from the United States. .

The slavery that Manly claimed to be divinely ordained for a quarter millennium included, "the conversion of human beings into currency, into machines who existed solely for the profit of their owners, to be worked as long as the owners desired, who had no rights over their bodies or loved ones, who could be mortgaged, bred, won on a bet, given as wedding presents, bequeathed to heirs, sold away from spouses or children to cover an owner's debt or to spite a rival or to settle an estate. They were regularly whipped, raped, and branded, subjected to any whim or distemper of the people who owned them. Some were castrated or endured other tortures too grisly for " [description here] (Isabel Wilkerson, Caste, p.45).

We must never forget, however, as Ibram X. Kendi reminds us in his wonderful book, Stamped From the Beginning: The Definitive History of Racist Ideas in America, that racial discrimination -- the deliberate decision to single out people with black skin from Africa for ruthless economic and sexual exploitation - preceded racism, i.e., borrowed ideas of black inferiority subsequently employed to justify that inhumane exploitation. Racism, in turn, fostered the ignorance and hate that debilitated and demeaned so many whites, including white Christians. (pp. 9-10).

Infused with the dogma of white supremacy, the Southern Baptist Convention was able to spread and dominate southern culture during the late nineteenth century. "And by the mid-twentieth century, the SBC ultimately evolved into the single largest Christian denomination in the country, setting the tone for American Christianity overall and Christianity's influence in public life."

The tone was predicated on "the theologically backed assertion of the superiority of both 'the white race' and Protestant Christianity." It "undergirded a century of religiously sanctioned terrorism in the form of ritualized lynchings and other forms of public violence and intimidation."

The alleged superiority of the white race was predicated on borrowed racist interpretations imposed on or derived from passages found in Genesis. Take your pick: either the "mark" that God put on Cain, or the curse that Noah put on Ham. Neither idea was new.

As Stephen R. Haynes writes, in his book, Noah's Curse: The Biblical Justification of American Slavery, "The suggestion that Cain's mark was blackness was advanced in eighteenth-century Europe and was popularized a century later in America by Joseph Smith, founder of the Mormons." (p. 15) Moreover, as Michael A. Gomez writes in his book, African Dominion: A New History of Empire in Early and Medieval West Africa, the Muslim world was aware of Noah's curse as early as the ninth century. According to one Muslim, Ibn Qutayba, Ham was the white son of Noah. But Allah "changed his color and the color of his descendants because of his father's curse. Ham went off, followed by his children. They settled on the shore of the sea, and Allah increased them. They are the Sudan" (p. 48)

(Scholars who have studied the Hebrew Bible and New Testament closely are painfully aware of the many factual errors and flawed logic that besmirch both books. They are anything but inerrant. Less noted, but equally flawed, have been the many outrageous interpretations gleaned from the many ambiguous passages found in both books. For example, "if Cain is the eldest son of Adam and Eve, and he has only one brother, whom he has just now killed, why does he complain to God that once he is exiled 'anyone who finds me may kill me'? There is no 'anyone' alive except his own mother and father" [James L. Kugel, How to Read the Bible, p. 66.]. How mentally feeble must a supposedly omniscient God be to conclude that Cain needed a protective "mark?" Finally, what are we to make of all the interpreters across the ages who, blinded by race, failed to see the illogic of the mark?).

In White Too Long, Dr. Jones tells harrowing tales of Christians flocking to and frolicking at the verified 4,400 lynchings of blacks that took place between 1877 and 1950. Often they gathered up "souvenirs" of severed and burnt fingers, ears, and noses - and sometimes a penis -- before going to their Christian church or after leaving a Christian church service.

Dr. Jones provides the gruesome details of the lynching of a Georgian, Samuel Thomas Wilkes, on the third Sunday after Easter in 1899. Wilkes admitted to killing prominent white planter, Alfred Cranford, but only after an argument led to Cranford pulling a gun. His story didn't match the many sensational news reports accusing him of burying a hatchet in unsuspecting Cranford's head, throwing his child to the floor and raping his wife. (What's a respectable lynching in the South without the obligatory fabrication of a rape of some innocent white Southern woman?).

Special trains were running to take church goers to the lynching. Conductors shouted: "Special train to Newman! All aboard for the burning!"

At the lynch site, Wilkes "was stripped naked, and chain was wrapped around his body from neck to foot, locked around his chest, and attached to a tree, Tree limbs and railroad ties were laid at his feet, and young boys scavenged for additional brush to add to the pyre. Before the fire was lit, Wilkes was tortured for a half hour. His ears were cut off, his fingers removed one by one, and his genitals severed - with each held up for the approval of the cheering crowd. With Wilkes in agony but alive, he was doused with kerosene, and the pyre was lit. At that point, he screamed his last words: "Sweet Jesus!" Wilkes struggled against the flames, breaking the chains and lunging forward, at which point several whites pushed him back into the flames with large pieces of lumber and pinned him down until he died.

Not even the bones of the Negro were left in the place, but were eagerly snatched by a crowd of people drawn here from all directions, who almost fought over the burning body of the man, carving it with knives and seeking souvenirs of the occurrence."

Walter C. Uhler is an independent scholar and freelance writer whose work has been published in numerous publications, including The Nation, the Bulletin of the Atomic Scientists, the Journal of Military History, the Moscow Times and the San (more...)
Related Topic(s): America Is A Christian Nation; Christian Religion; Christian Right; Evangelical; Lynching; Protestant; Racism; Slavery; Trump; White Anglo Saxon Protestant; (more...) White Male Privilege; White Males; White Nationalism; White Nationalist; White Supremacist; White Supremacy; White Trash, Add Tags  (less...)
Add to My Group(s)
Go To Commenting
The views expressed herein are the sole responsibility of the author and do not necessarily reflect those of this website or its editors.