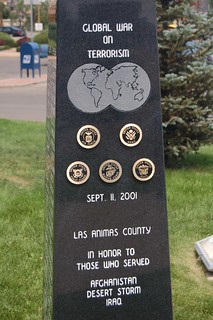 Global War on Terrorism Memorial
(Image by mattlemmon)   Details   DMCA
The first Muslim Brotherhood (MB) organization established in America was the Muslim Student Associations (MSA), which are based in universities. Next stage saw creation of the North American Islamic Trust (NAIT) in 1973 to spread radical ideas beyond college campuses. Today, NAIT owns hundreds of Islamic centers, mosques and schools across the US.
Others were International Institute of Islamic Thought (IIIT), a think-tank dedicated to the "Islamization of knowledge"; the Islamic Society of North America (ISNA), a self-described umbrella organization for all Muslims in North America to "to advance the cause of Islam and service Muslims in North America so as to enable them to adopt Islam as a complete way of life"; and the Islamic Association for Palestine (IAP) "to communicate the Ikhwan's [Muslim Brotherhood] point of view" and "to serve the cause of Palestine on the political and the media fronts." After Hamas was created in 1987 in Gaza, the IAP became its leading representative in North America.
Zeyno Baran's take on two particularly well-known and influential organisations is disturbing to say the least. One of these is the Muslim American Society (MAS), founded in 1993; and the other is the Council on American-Islamic Relations (CAIR), "which I believe was created by MB to influence the US government, Congress, and NGOs, along with academic and media groups".
CAIR portrays itself as a mainstream Muslim organization and has been treated as such by many US government officials, including Presidents Clinton and Bush.
Read what she had told the Senate seven years ago and you will agree with my prognosis that US of America is suffering because of its failure to heed the warning signals:
"What is critically important in all these organizations is their support for one another; the same leaders appear in multiple organizations, tend to have familial relations, and move within the same close trusted circles. Outwardly they all appear to be different entities, but they are actually part of a carefully planned Islamization effort," Baran said.
She went on to quote from court documents in the federal case against the Holy Land Foundation for Relief and Development (HLF), which was charged with providing millions of dollars to Hamas. NAIT, ISNA, and CAIR were all named as unindicted co-conspirators in the case.
One of the court document clearly states that the general strategic goal for the group in North America is presenting Islam as a civilizational [sic] alternative. It is a six-stage mission that will adopt Muslim causes globally and domestically for unifying and directing Muslim's efforts.
As natural corollary, says the document, Muslims should look upon this mission as a "Civilization Jihadist responsibility" and their work in America is "a kind of grand Jihad in eliminating and destroying the Western civilization from within and "sabotaging its miserable house by their hands and the hands of the believers so that it is eliminated and God's religion is made victorious over all other religions."
This elaborate recap of what Zeyno Baran and others have been stating over the past several years is not to endorse what all they aver but only point out that successive American governments have not read the signals about home-grown terrorist threats.
There is much on record to show that jihadi-Salafi ideology is "the driver that motivates young men and women, born or living in the West, to carry out 'autonomous jihad' via acts of terrorism against their host countries".
Despite having multiple eyes in the sky, the US of America has turned a blind eye to Islamism and its ideological extremism rooted in terrorism from Af-Pak region, which is home to Taliban, Haqqani Network, Lashkar-e-Toiba and their clones, to the Middle East, where Daesh is threatening the established order.
Is this an extremely short-sighted and self-defeating enterprise for the land of free enterprise?
Zeyno Baran thinks so. In fact she did not mince her words before the Senate committee. Her advice, which went unheeded as the turn of events show, was: Expose the deception of the Islamists. Give aggressive response ideologically.
Seven years after her testimony, there is no reason for the likes of this writer to disagree with her assessment. Because, the Islamist threat is real. Islamist ideology cannot be ignored.
All Muslims in America or elsewhere are not Islamists. Most of them are moderate. The fight against the new danger will succeed if this silent majority is co-opted, freedom to practice their faith is guaranteed and their civil rights are protected as is the case always in the Eldorado of the world. (Concluded)

A blogger since July 2008 James Duglous Crickton is a London based consultant working with a consultancy firm focusing on Asia, particularly South Asia and East Asia. Political Research is his functional focus area. While his interests are (more...)
Related Topic(s): Daesh; Deception; Islamism; Islamization; Taliban; Terrorism; Terrorism Islamic; War On Terror, Add Tags
Add to My Group(s)
Go To Commenting
The views expressed herein are the sole responsibility of the author and do not necessarily reflect those of this website or its editors.