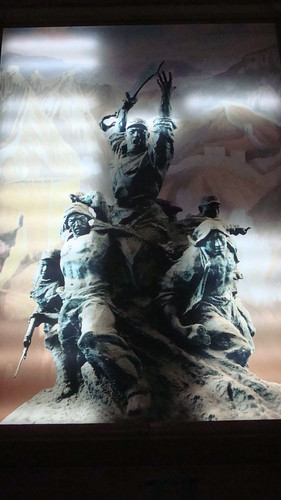 The ugly row over whether President Trump disrespected the young widow of a fallen American soldier has overshadowed a bigger issue. That is, the increasing number of US military operations across the African continent.

Two weeks ago, Sgt La David Johnson (25) was killed along with three other US special forces troops when Islamist militants ambushed their patrol in the West African country of Niger. Trump got into hot water this week about reported off-hand comments he made to the widow of Green Beret Johnson. The president denies he said anything disrespectful. Although the dead soldier's family says otherwise.

In all the media controversy over what Trump said or didn't say, questions about what US troops are doing in Niger are unfortunately overlooked. Not just Niger, but in dozens of other African nations.

It is reckoned from US army data that there are thousands of special forces and other military personnel carrying out up to 100 missions at any given time in some 24 African states. That's nearly half of all the countries comprising the African continent.

US special forces and surveillance drone operations are deployed in Niger, Chad, Mali and Sudan which all run along the southern Sahara desert. Further south in sub-Saharan Africa, US military are operating in Nigeria, Central African Republic, Uganda, Ethiopia and, of course, Somalia, where they are involved in a state of war against Islamist al Shabab militants.

The deployment of US troops in Africa was first stepped up under President GW Bush when his administration formed AFRICOM in 2007, a whole US command dedicated to the continent. Subsequently, under President Barack Obama, the American deployments increased further. Now under President Trump, the US force presence is reckoned to be at its highest level yet.

The official explanation is that American soldiers, Navy and air power, as well as CIA clandestine operations, are there to counter terror groups, who could plan and mount strikes on Europe and North America.

True, there are several dangerous terror networks active in various African states, from al Shabaab in Somalia, to Boko Haram in Nigeria and al-Qaeda in the Maghreb. The latter has affiliates in Algeria, Mali, Chad and Niger where the US troops were killed recently along with a number of local forces they were supporting.

But there is more than a suspicion that the US is using the cover of combating terrorism to conceal and project its real objective, which is to exert its influence over African nations. One observation for raising doubts is that the problem of these terror groups has actually grown more rapidly after the US troops started to be deployed in larger numbers under President Bush. Echoes of Afghanistan, Iraq and Syria here.

When Trump hosted several African leaders last month in New York during the UN annual congress he told them that his American investor friends were hot-footing it to the continent "to make a lot of money." Typical of Trump, everything is reduced to filthy lucre. Now he may have been trying to charm his guests with a little light-hearted banter, but there's much more to the joke. Africa is indeed seen as the continent of the future owing to its prodigious and still largely untapped resources.

The trouble for America and other Western powers is that China has stolen a march on them in terms of cultivating investments and harnessing resources across Africa. Under President Xi Jinping, China has investment projects worth an estimated $60 billion in dozens of African countries. This is way ahead of what the Americans or Europeans have invested.

Earlier this year, China opened its first ever overseas military base, in the East African country of Djibouti. That's still small news compared with the reported 46 military bases that the US has across the continent.

Related Topic(s): America Culture Of Violence; American Facism; Americans Killed; Asia; China; Military, Add Tags
Add to My Group(s)
Go To Commenting
The views expressed herein are the sole responsibility of the author and do not necessarily reflect those of this website or its editors.