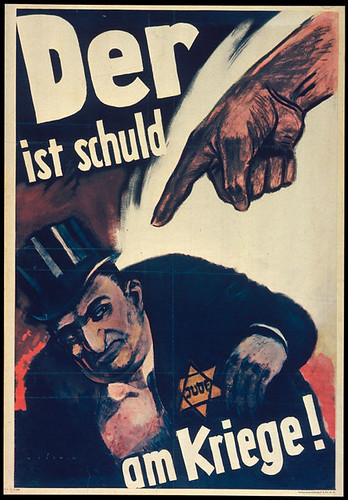 It's been 75 years since the end of WWII and fascination with all things Nazi has seen no end; indeed, you could argue cogently that the monster Herr Docktor Deutschenstein brought to life from the parts of dead dogmas and

old ideologies has never had more global interest. Innumerable auctions of paraphernalia, books, films, TV series, podcasts, and radio shows have been devoted to the historical phenomena that led to the rise of the Third Reich. You'd like to think it was all in the spirit of Lest We Forget, but you'll never again be that criminally naive. Evil may be banal, but, mein gott, it's as popular as ever.

Likewise, 75 years after the liberation of Auschwitz, through equally countless media productions and public remembrances, Jews around the globe have spared no effort to remind us of what the rise of such monsterhood has cost civilization. The Holocaust, as represented by the tumbling action of naked bodies pushed by bulldozers into mass pits, is imagery of such evil and depravity that there remains no adequate way to deal with it emotionally. The Holocaust is, for Jews, what Slavery is for African Americans. It seems the Holocaust and Slavery will always be the elephants in the room of western civilization. Sadly, those of us in the room, who are neither Black nor Jewish, no matter how freed from ignorance we believe we are, can't even promise ourselves that such horror will never happen again. We look around; we know better.

There have been movies made that wonder aloud what would have happened had Hitler escaped the bunker in 1945 with his mentality intact and emerged in some land of magical realism, south of the border, ready to fuck with us again -- The Boys from Brazil and Marathon Man are like that. But more recently, populist politics and fascism are on the rise and showing their fangs, and mixed with new technologies (from social media to eugenics), the LestWeForgetism required to keep them at heel is more vital than ever. Democracy is down but not out, the eight-count has begun. Two new streaming series -- Hunters (Amazon) and The Plot Against America (HBO) -- are What If movies that are based on real events that saw America come terrifyingly close to embracing Nazi thinking before, during and after WWII. They're timely series worth watching.

Hunters is about a real CIA (OSS) program called Operation Paperclip that saw the American government secretly 'import' thousands of Nazis at the end of WWII, ostensibly to keep them out of the clutches of the Soviets, with whom America was in a Cold War. The series stars Al Pacino, Logan Lerman (Shirley), Lena Olin (The Artist's Wife), Saul Rubinek (Billions), and Carol Kane (Unbreakable Kimmy Schmidt). Imagine you're a survivor of Auschwitz brought to America to recoup with democracy's chicken soup, and you're in a supermarket in Manhattan and look up to see the Nazi who tattooed you, and led your family into the gas showers, standing right there with an eggplant in his hand, apparently rescued by Americans too. Jaw-dropping? You bet.

Operation Paperclip was the means by which totally unpalatable Nazi scientists - such as Werner von Braun and Kurt Blome - were allowed to escape post-war justice at Nuremberg, in order to help the Cold War effort against the Soviets. Of Blome, who had been director of the Nazi biological warfare program. Historian Stephen Kinzer writes,

They had learned how long it takes for human beings to die after exposure to various germs and chemicals, and which toxins kill most efficiently. Just as intriguing, they had fed mescaline and other psychoactive drugs to concentration camp internees [especially Dachau] in experiments aimed at finding ways to control minds or shatter the human psyche.

As for von Braun, he'd led the V2 rocket program that terrorized Britons, and went on to lead NASA's quest (along with the Black computers) to get to the moon. That's right, a Nazi was partially responsible for that one small step for Übermenschen.

In the series, events kick off when a young man, Jonah (Lerman), watches as his grandmother (a death camp survivor) is murdered in his NYC home and he does nothing to stop it. Anguished and inquisitive, he meets up and joins Meyer (Pacino), who heads a motley group of Nazi hunters -- including a severe British "nun" and a Black woman who gives off Angela Davis vibes -- who set out to right the wrong, as vigilantes, of Nazis being in America. Along the way they try to understand how the US government could have allowed such evil into the country; America risked allowing demon seeds to grow. As if to underscore the moral rectitude of their mission, the group uncovers a Nazi plot to set in motion the rise of the Fourth Reich. Kick-ass ensues, with lots of 'entertaining' twists of Nazi necks, especially for Rocket Man von Braun, who gets spoiler alerted in the series. Industrialists, like Henry Ford, are also given comeuppance as nasty works of Nazi assemblage.

Hunters is a well-acted series, with Pacino especially effective as a slow-moving reflective 'Jew' with a penchant for bloody revenge. Jerrika Hinton as Millie Morris, a Black FBI agent caught between the vigilantes and the Nazis being hunted, and, Kate Mulvaney as Sister Harriet, follower of the Olden Rule (eye-for-an-eye) nun with mysterious ties to MI6, are also outstanding. The actors playing the evil Nazi villains (Lena Olin, as The Colonel, and Dylan Baker as Biff Simpson) are great, too. And, Jerrika Hinton's Black FBI agent adds consciousness of the scope of racism, two ex-slave cultures coming together like buff vampire slayers to kill off the egos that explode in history like IEDs, as Erich Fromm accounts for in The Anatomy of Human Destructiveness.

The series is, at times, comic bookish, but has outstanding a-lineal insertions, like the game show, Why Does Everyone Hate Jews, where seemingly ordinary contestants are asked leading questions about the 'evil Jews' that serves as a useful plot device to expose America's underlying bigotry. It helps us see how ordinary Americans, in their desire to make America great again or worse, could be hoodwinked by fascism. Also, the insertions are surreal. The game show reminded me of a segment in Natural Born Killers when a psychopathic Rodney Dangerfield explodes on a TV screen in an episode of "I Love Mallory" and takes over the film for a minute. In NBK, it's a very powerful storytelling device for flashing Marilyn Knox's dysfunctional childhood. And the surrealism speaks to the incapacity of human language, at some point of outrage, to adequately express existential horror. The title of Harlan Ellison's short story, "I Have No Mouth, and I Must Scream," kind of sums up the situational tension.

Related Topic(s): America Freedom To Fascism; American Culture; American Facism; Death; Democracy; Evil; Hitler; Holocaust; Hunters; Jews; (more...) Liberty; Penis; Rabbi; Racism, Add Tags  (less...)
Add to My Group(s)
Go To Commenting
The views expressed herein are the sole responsibility of the author and do not necessarily reflect those of this website or its editors.