In a fascist shift, the state always forms paramilitary groups so that political violence can be carried out without the government being held accountable for it. It's predictable that when this process started to happen in America, our version of Hitler's Brownshirts and Mussolini's Blackshirts would originate from America's instruments of imperialism.

An example: With the rise of Blackwater during the War on Terror, the Bush administration gained a private mercenary company that came to function as a paramilitary group. Blackwater's contractors carried out acts of unprovoked violence against innocent people that American troops wouldn't have been able to commit without intense scrutiny being put upon the U.S. government itself. This violence hasn't ended. Blackwater's operators have been able to continue their company under different names since its crimes were exposed. Their victims have extended not just to the foreign battlefields of American imperialism, but to the crisis zones in America that capitalism has created; Blackwater's forces patrolled the streets of New Orleans during Hurricane Katrina, and there's evidence that they engaged in aggressive violence against the city's population.

Since then, Blackwater (now called Academi) has been getting involved in the Trump administration's wars against Syria and Venezuela, and another mercenary company, called TigerSwan, has been profiting off of crises like the 2017 hurricanes and the struggle in Standing Rock. Violent class confrontations, climate change-created natural disasters, and the demand for private mercenary companies to get involved in America's wars will most certainly all increase in the coming years and with them will come the proliferation of these uniquely capitalist and imperialist American paramilitaries. But they're just one part of a fascist class that's emerged in the United States.

The rise of private armies like Blackwater has been tied in with the rise of citizen-organized vigilante far-right militias, and these two categories of armed fascist groups represent an overall threat to the safety of America's marginalized people.

Radical right-wing American militias, whose numbers reached a record high in 2013 and have continued to rise throughout the Trump era, have taken both their symbolism and many of their members from the domestic ramifications of America's recent wars. Veterans make up a significant amount of the membership of these militias, making for a situation where many of the country's potential right-wing terrorists have gone through military training. America's fascist paramilitaries also derive their iconography from recent military culture; militia members typically adorn their cars with military-style grilles, grow beards in the same vein as the ones that have become popular with male U.S. soldiers, and wear outfits that imitate U.S. army gear.

"Active duty personnel in the 21st century almost exclusively wear combat fatigues," wrote Powell in his cartoon from this year titled About Face: Death and Surrender to Power in the Clothing of Men.

"Even officer workers and higher-ranking officers. While I read this as extending uniformity to its logical conclusion, it's a stylistic shift that seems to entertain a stunted child's play-acting fantasy. Accompanying this 'forever war' dress-standard is the adoption of a distinctly paramilitary aesthetic, most strikingly visible in the presence of facial hair, trickling down from allowances made for special forces (and accompanying private mercenary units, which often outnumber actual military forces) for operations in the Middle East, Central America, and Africa."

"At its core, this imitation of military aesthetics in fascist militias is""speaking only the language of power, the intellectual crudeness of reaction, contrarianism, opposition"Aggrieved, insecure white Americans with an exaggerated sense of sovereignty have officially declared their existence as above the law, consistent with a long tradition of acting and living above it"These are the future fascist paramilitary participants and their ushers take them seriously."

By identifying themselves with the symbols of the American empire, these militia members have declared that they're going to uphold the violent legacy of the empire after it implodes in on itself. As the dollar moves towards collapse and American influence declines around the globe, in the next decade the U.S. will likely see a massive contraction of its global military forces one that results in the U.S. government using its military power to try to control its own population amid an economically and environmentally unstable new era. When Trump or an authoritarian successor may carry out a violent crackdown to quell America's coming period of unrest, the civilians who will be on the side of this crackdown are these fascist citizen militia members.

It's these groups which have already symbolically merged with the police and the military, and which will act in lockstep with whatever actions the government's official military forces take to control the population. As fascist paramilitaries always do, the militia members have lately been functioning as enforcers of the political agenda of the far right, with militias policing the border, detaining undocumented people, and using threats of violence to support a recent climate bill boycott from Republican legislators in Oregon. The country's destabilization in the coming years will cause them to act far more boldly, and to do so with increasing impunity as leaders like Donald Trump work to enable them. 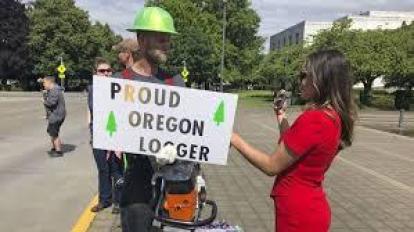 The future of America's fascist paramilitaries could resemble the paradigm of state-sanctioned right-wing death squads that proliferated under regimes like the one of Augusto Pinochet, whose image has ominously become a favorite symbol of solidarity among modern fascist sympathizers. The recent increases in hate crimes like the Christchurch shooting in New Zealand and the Pittsburgh synagogue massacre are preludes to a violent new era that far-right extremists want to create, one in which the right's political opponents and what they see as elements of "degeneracy" are made submissive by routine acts of terror.

Related Topic(s): America; America Freedom To Fascism; American History; Military; Police; Trump, Add Tags
Add to My Group(s)
Go To Commenting
The views expressed herein are the sole responsibility of the author and do not necessarily reflect those of this website or its editors.