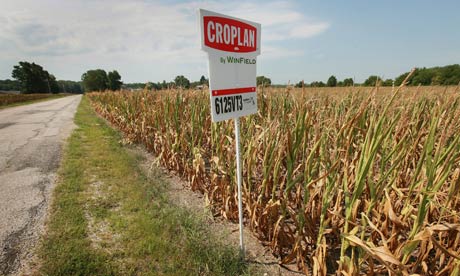 (Image by Unknown Owner)   Details   DMCA
A field of corn drying up in a drought-stricken field near Vincennes, Indiana, July 2012. Photograph: Scott Olson/Getty Images
As the US faces record drought and an Old Testament-level pestilential heatwave in the midwest, American environmental denialism may be starting to change. The question is: is it too late?

America has led the world in climate change denial, a phenomenon noted with amazement by Europeans, not to mention thinking people around the world. Year after year, the US has failed to sign global treaties or curb emissions, even as our status as a source of a third of the world's carbon emissions goes unchanged.

It is fairly well-known what has been behind that climate change denial in America: vast sums pumped into an ignorance industry by the oil and gas lobbies. Entire think-tanks to obfuscate man-made climate change have been funded by these interests, as have individual congressmen and women. Entirely typical, for instance, is Louisiana Representative John Fleming, whose campaigns, according to blogger John Henry, accept about $200,000 a year from oil and gas lobbyists, and who uses his social media pages to deny global warming.

It is weird to live inside that US denial about climate change. Last year, for example, as tropical storm Irene approached New York, we duly boarded up windows, put in emergency supplies, and heard endless alarming bulletins from the mayor's office about which neighborhoods were likely to be submerged if the tides surged -- without ever hearing from local officials or the media a word connecting rising sea levels with manmade global warming. All the more weird because New Yorkers weren't writing off portions of their downtown neighborhoods to overflowing seawater a century ago.

It is weird, too, to watch the leaves turn red earlier and earlier in the fall in the American northeast and have absolutely everyone say, "the weather is strange" -- yet never see mainstream media reflect any interest in the connection between human industrial activity and that strangeness. And this weather map shows how widespread and extensive that extreme weather is in the US.

But could our denial be cracking, this summer, as, in the heartland -- that most iconic of American landscapes -- broiling temperatures injure humans and cook fish in the water? This summer a crisis has occurred (though one that, again, is seldom reported on in terms of our outsize contribution to the disaster), as midwestern farmers lost vast swaths of their corn crops to scalding heat and drought. In the American unconscious of wishful ignorance, this disaster and loss was to be borne, as usual, by other people far away.

But we face some serious problems in rising out of our torpor. In "Shifting Public Opinion on Climate Change: An Empirical Assessment of Factors Influencing Concern over Climate Change in the US, 2002--2010," John Wihbey shows that Gallup surveys reveal Americans' level of concern varying widely:

"In 2004, 26% of respondents said they worried "a great deal" about the issue; in 2007 that number rose to 41%; by 2010, it had fallen to 28%. This variation comes despite consensus among scientists about the underlying data patterns and virtual unanimity of scientific opinion."

Wihbey and colleagues' study found that this fluctuation was caused by, among other factors, political polarization. In other words, when one party says global warming is a crisis and the other says all that is nonsense, and there is no cooperation between political elites at both ends of the spectrum, the net result is apathy.

"The two strongest effects on public concern are Democratic congressional action statements and Republican roll-call votes, which increase and diminish public concern, respectively. This finding points to the effect of [a] polarized political elite that is emitting contrary cues, with resulting (seemingly) contrary levels of public concern."

They found, ominously, that the level and quality of good information in the general media at large had little effect on people's levels of concern -- indeed, weather events themselves had little bearing on people's levels of climate-related anxiety or interest. Only the combination of media coverage and expressed alarm from political leaders bumped up public concern.

With the oil and gas lobbies pumping money into Congress to blunt any professed concern among the political class, that motivating union of genuine concern and honest messaging can scarcely be relied on. The authors conclude, dispiritedly:

"Given the vested economic interests reflected in this polarization, it seems doubtful that any communication process focused on persuading individuals will have much impact."

I spent part of this summer looking at glaciers in Alaska; in Juneau, in Tongass National Forest, park rangers expect that a glacier there will withdraw, from effects of anticipated climate change, in 50 years. So, the federal government is planning for the effects of manmade climate change, even as the White House and US Congress remain paralyzed from doing anything to arrest the warming: the very definition of denial. If we don't snap out of this stasis of stupidity, nothing can change for good.

Author, social critic, and political activist Naomi Wolf raises awareness of the pervasive inequities that exist in society and politics. She encourages people to take charge of their lives, voice their concerns and enact change. Wolf's landmark (more...)
Related Topic(s): American Hypocrisy; Climate Change; Climate Crisis, Add Tags
Add to My Group(s)
Go To Commenting
The views expressed herein are the sole responsibility of the author and do not necessarily reflect those of this website or its editors.