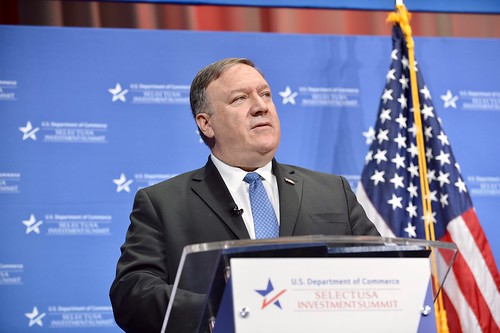 Predictable reaction to an expected action long in the works. This expression neatly sums up the latest face-off between the United States and Pakistan. Secretary of State Michael R. Pompeo has placed Pakistan on the Black List for its violation of religious freedoms. Officially known as 'Countries of Particular Concern (CPC)', the Black List invites sanctions on nations that have "allowed or conducted severe, ongoing, egregious, systematic violation of religious freedom."

Pakistan has qualified for the CPC tag, as it "did not change its behaviour" even after it was placed on a Special Watch List last year, according to Sam Brownback, State Department's Ambassador at Large for International Religious Freedom.

When Pompeo made his announcement in Washington, Tuesday, Dec 11, Pakistan was fast asleep, literally, well because of the time difference between the two countries. Foreign-office mandarins woke up with a rude shock in Islamabad and rejected the American homily. Their long statement bluntly refusing to be "cowed down", however, missed the Wednesday (Dec 12) morning newspapers, and found a place on the internet editions later in the day.

The basic contention of Pakistan is that it is a "multi-religious and pluralistic society" and that it does not "need counsel by any individual country how to protect the rights of its minorities".

Prime Minister Imran Khan's government has been working overtime to please President Donald Trump in recent weeks. Though he has been brought up on a diet of anti-American rhetoric, Imran has been making all the right noises since the middle of November -- noises designed to please the Great Satan, as he used to dub Uncle Sam even in the run-up to the election that had brought him to power some four or five months ago.

From what I understand this period has coincided with the State Department's decision to ramp up pressure on Pakistan with an eye as much on the Afghan solution as on treatment of minorities in the country. Pakistan has smoked peace pipe with arch rival, India, offered a corridor to link its Kartarpur Gurudwara with the Indian border, and conceded that India's role is crucial for Afghan peace process. Visa-free visits are offered to Indian Sikh pilgrims to refurbish Pakistan's image. Obviously, this love for India was a subtle message to the White House. It is that since you are courting India (in the Asia-Pacific region as a counterfoil to China), we will walk the extra mile to befriend India, just for your sake.

China also was subjected a snub of sorts when it became clear that the US will not allow a World Bank-IMF bailout if Islamabad remains fixated on the China Pakistan Economic Corridor (CPEC). Imran Khan did not give up the multi-billion-dollar project that is China's first Belt and Road Initiative (BRI) but gave sleepless nights to Beijing with his nuanced calls for a re-look at the project execution.

Washington was pleased, and gave a quiet go-ahead to the Bretton Wood twins to engage with Islamabad for an extended loan facility. My Pakistani friends tell me that Imran Khan's action vis--vis Beijing was not prompted by US pressure. "He (Imran Khan) considers Mahathir Mohamad (Prime Minister of Malaysia) as his role model. When Mahathir shelved two major infrastructure projects by Chinese companies for being too expensive for his debt-ridden country, he followed suit since Pakistan is also reeling under a huge domestic and foreign debt." Imran Khan has since found a new financier in Saudi Arabia, and has slowed down negotiations for IMF dole.

It is difficult to contend that the Trump administration has seen through Imran games. Otherwise, President Trump would not have written a long letter to Pakistan Prime Minister early December soliciting his help in the Afghan peace process. This letter diplomacy came after engaging with Islamabad in a public spat on his favourite theme -- Pakistan's help to Afghanistan-centric terrorists. Prime Minister Khan reciprocated Trump sentiments and announced all-out help to the US on the Afghan theatre.

Now therefore, Pompeo's announcement designating Pakistan as a CPC in a congressionally mandated annual report should unnerve the Sunni-majority nation. But it will not. Like always in the past, this designation is a half-measure. After holding forth on the great merits of American resolve to promote religious freedoms across the globe, Ambassador Brownback has punctured his own case.

"What we are doing -- in the Countries of Particular Concern, the statute provides for a list of sanctions. Some of them can be double-hatted -- you'll notice several countries on there that we have problems with -- or the sanctions can be waived by the President, based upon national interest. And we've got a mix in this group. We've got some of the countries are being sanctioned. Most of them are double-hatted sanctions; actually all of them are double-hatted sanctions. And then some of the countries are not being sanctioned and being waived -- the sanctions on them are being waived because of national interest. Saudi Arabia was -- is in the waived category, along with Pakistan, on a national-interest area. I believe those are my only other two. Tajikistan and Turkmenistan are both waived as well under national interest..." he told a questioner at an on-the-record briefing he had held at the State Department minutes after Pompeo went public with a press release on Religious Freedom designations.

Will Pakistan and Imran Khan miss their sleep over Trump tweets -- old and new alike -- henceforth? Your guess is as good as mine. One thing is clear. Pakistan has learnt to live with the 'do-more mantra' of Americans.

A blogger since July 2008 James Duglous Crickton is a London based consultant working with a consultancy firm focusing on Asia, particularly South Asia and East Asia. Political Research is his functional focus area. While his interests are (more...)
Related Topic(s): Americans For Democratic Action; Debt; Diplomacy; Freedoms; Internet; Pakistani Taliban; Peace; Rhetoric; Rights; Sanctions; (more...) Snub; Sunni, Add Tags  (less...)
Add to My Group(s)
Go To Commenting
The views expressed herein are the sole responsibility of the author and do not necessarily reflect those of this website or its editors.