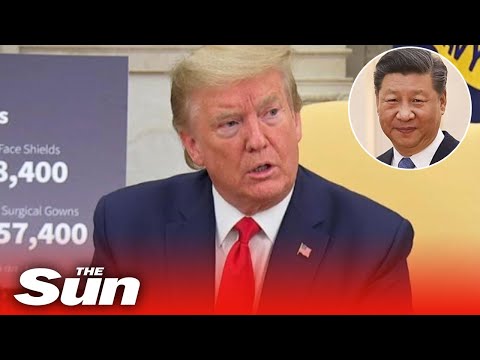 Washington is picking yet another fight with China. On top of the trade war we now have the coronavirus war. China is accused of being responsible for the virus by withholding information about it. Some in Washington want to make China pay for the cost of the virus by reneging on US debt held by China in the form of US Treasuries.

What information about coronavirus is China supposed to have withheld?

That China was doing coronavirus research? How could this information have been withheld when the US State Department knew about it, the N.I.H. was funding it, and US scientists were complaining about the danger?

That coronavirus was ravaging Wuhan? How was this information withheld when it was in the media every day?

The United States and its vassals knew about the virus outbreak in China two months prior to its outbreak in the West and did nothing. Through either inaction or intent, the US, Canada, and Europe imported the virus. The governments refused to stop flights in and out of China and to prevent cruise ships from welcoming passengers from infected areas. Governments did not want to interfere with profits, which came before public health. Absolutely nothing was done. No efforts were made to stockpile protective masks and gear, or to protect nursing homes, or to segregate hospital facilities, or to think outside the box about treatments. The Swedish government was so unprepared that it did not even try to do anything and just let the virus run its course with devastating effects on the elderly. (Note: There is much disinformation about Sweden from those who believe the virus is a plot to impose police state controls, such as claims that Sweden has kept the economy open without paying for it in a higher death rate and is gaining "herd immunity" against Covid-19. These claims are contradicted by news reports. For example, read here and here.)

In an attempt, more or less successful, to reduce the infection rate so that health facilities were not over-burdened, every other country imposed social distancing rules, bans against crowd events, and workplace closures. As little was known about the disease and the Chinese mortality rate was believed to be vastly understated, there was no responsible alternative to the so-called "lock-downs." It remains to be seen whether the concern for profits has produced a premature reopening that will result in a second wave of rapid infection rates. Many suspect that Big Pharma and Bill Gates want to keep the infection spreading in order to panic us into being vaccinated with an inadequately tested vaccine.

The blame China game is really an effort to cover-up the failure of Western governments to deal with a crisis.

The failure of governments to deal with crisis is ubiquitous. Just think Katrina, the hurricane that devastated New Orleans and the Gulf Coast. If you don't remember or are too young to have experienced the 2005 hurricane via TV, read Douglas Brinkley's The Great Deluge.

Everyone knew that the levies protecting New Orleans and surrounding areas were unable to withstand a storm of Katrina's intensity. The city was a bowl waiting to fill up with the water that wiped out 80% of New Orleans and 150 miles of Gulf Coast communities. Evacuation orders came too late. There were no steps taken to evacuate those without cars and resources. The sick and elderly were left in place. The few steps that were taken to assemble buses, boats, and first responders located the scanty resources in areas that flooded. The New Orleans Police Department went AWOL. Some joined in the looting. FEMA was a total failure. President George W. Bush and Homeland Security Director Michael Chertoff were not focused on the unfolding tragedy, but on their creation of a terrorist hoax that was used to justify 20 years of US bombing and invasions of Middle Eastern and North African countries. As Bush had deployed Louisiana's National Guard to Iraq, the Louisiana governor had to borrow guardsmen from other states.

The US Coast Guard, Louisiana Wildlife and Fisheries personnel, and private individuals formed the force of first responders. People from Louisiana and from other states showed up on their own time, their own money, and with their own boats and began organizing rescues. There were many heroic and generous people involved in the rescue. As most of the rescuers were white southerners and most of the rescued were black, it put the lie to the propagandistic picture of the white southern racist. For example, Sara Roberts and her husband Buisson, a descendant of Confederate General P.G.T.Beauregard, organized the Cajun Navy. Sara enlisted clients of her accounting firm who came up with 35 boats and crews to man them. One of her clients, Ronny Lovett, paid his construction crews triple wages for their rescue time and spent $200,000 of his money equipping the boats with food, water, medical supplies, chain saws, life jackets, spotlights, ropes and whatever else could contribute to successful rescues. It was individual citizens, not the governments in New Orleans, Louisiana, and Washington that rescued many thousands of people who otherwise would have perished.

From its founding day, New Orleans was a man-made disaster waiting to happen. Dredging, canals, watercourse alterations, pipelines and a variety of other environmental damaging mistakes had over the years destroyed the wetlands that protected the city and Gulf Coast. In order to serve private profit, failure was built into the system. The Great Deluge is an external cost of a political and economic system that puts private profits first.

We are undergoing it again at this moment as areas of Michigan are inundated from floods caused by dam failures. One of the dams, the Edenville Dam was a long known public safety hazard . Boyce Hydro, the owner of the dam, repeatedly failed despite the intervention of regulators to address the known risk. Not only was Boyce Hydro negligent, but also were the government authorities that permitted the known risk to persist unaddressed. The lost of life and property from the flooding is an external cost imposed on third parties by Boyce Hydro whose agenda was limited to its profits.

It is as difficult to understand the liberal and progressive belief in government as it is to understand the libertarian belief in the efficacy of the invisible hand that allegedly causes private greed to serve the public's interest. Humans are a built-in failure machine. Their time perspective is short term. They are always surprised by the unintended consequences of their own thoughtless actions and inactions.

Related Topic(s): America Culture Of Violence; American Hegenomy; American Hypocrisy; China; Flood; Katrina, Add Tags
Add to My Group(s)
Go To Commenting
The views expressed herein are the sole responsibility of the author and do not necessarily reflect those of this website or its editors.