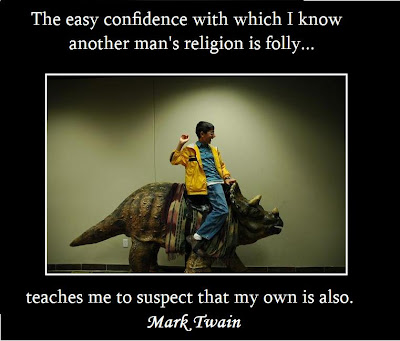 If one thing came out of the Quran-burning threat of "Pastor" Terry Jones, it's that America looked the fool for kowtowing to the machinations of an ignorant snake oil salesman. Some people might say that the media is to blame, but in this case, demonizing the messenger comes a little too late: the warning was announced months ago and very few paid attention. It was General Petraeus' outspoken concern that made the eyes of America focus on Jones. Then Terry Jones made his mark, not caring about American troops in Afghanistan, nor condemnation by his "peers" nor even about any spiritual message he so disingenuously (and quite ineptly) conveyed. By Sept. 7th, it was all done. He was in the history books; and since thousands of people had actually given their support, (in the form of Qurans to burn) he knew he'd garnered more followers than he'd ever dreamed of. Terry Jones realized power, the kind of power he'd craved all his life. The entire United States of America was BEGGING him not to do something, and he so kindly acquiesced to its entreaties, but only after it acquiesced to his demands. For several days, he had soldiers' lives in his hands. The power boggles the mind.

Perhaps it's the combination of media and "God God God" "Bible Bible Bible" "Send Money" that is irresistible to some American Christians. Perhaps it's the "Rev." or "Dr." that Jones put in front of his name (the latter just now being investigated both here and abroad). Maybe it was Jones' charisma (albeit a bit dull to those having an I.Q. above that of a dead flashlight battery) Or maybe, just maybe, it's that Jones had provided a form of entertainment to his little "flock" and to the rest of the nation. After all, America's foremost God-given birthright is ... to be entertained. Jones' escapade gave the public the same kind of thrill as would the latest Armageddon flick. He had all of us looking at our calendars and ticking off the hours.

Yet Terry Jones must have done something right. After all, his mentor, Fred Phelps, has been apoplectic ever since his acolyte received the kind of attention deemed only for his holiness, the God-Hates-Fags Phenomenon. You could say that to cause riots in the streets of foreign countries takes a certain savoir faire. And if Fred Phelps lacks anything, it's savoir faire. By playing for time, Jones had accomplished some bloodshed BEFORE he made his off-again-on-again pronouncements: dozens of people had been hurt in the ensuing riots. Of course, he prayed for them all to be healed, such is the way of the charismatic form of religion. 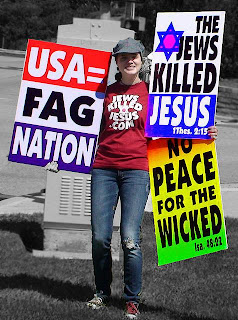 As anti-heroes go, Jones will fare better than Phelps because, in the end, he seemed to be reasonable and his (steadily increasing) flock will point him out as a stalwart, rather than just a wart on the face of today's Christianity.

But for all of it's looking the fool, we have to fear for an America where the Phelps' and the Jones' have any followers at all: does anyone want to actually MEET any of their followers? Only the bravest journalist would actually venture into their territories, intellectual black holes sucking out their entire I.Q. and journalistic integrity in an instant.*

And beyond the Phelpses and the Joneses, we have Inerrantists (the Bible is totally iwithout error), Fundamentalists (Bible "inspired"or maybe just faxed by God), Geocentrists (the Church was right and Galileo was wrong), Christian Reconstructionists (government by the the Bible, for the Bible, and with the Bible), Dominionists (Christians Rule), Young Earthers (Creationism-to-the-max), Premillenialists (the Rapture is coming soon), snake handlers, Lou Engle, Sharron Angle, Rod Parsley, Pat Robertson, David Barton, Glenn Beck, Bryan Fischer, and Michele Bachmann, to name but a very few.

Of course, along with these people we have institutions like the Creation Museum.

From The Creation Museum:

The themes of the exhibits resound in the theater presentations: Men in White, Six Days of Creation, The Last Adam, and Dinosaurs and Dragons. Our Special Effects Theater, complete with rumbling seats and rising mists, t akes visitors on a fantastic quest to find the real purpose and meaning of life.

Rev. Dan Vojir is has been writing/blogging on religion and politics for the better part of ten years. A former radio talk show host (Strictly Books " Talk America Radio Network) and book publisher, Dan has connected with some of the most (more...)
Related Topic(s): Bryan Fischer; Creation Museum; Creationism; Fred Phelps; Lou Engle; Michele Bachmann; Pat Robertson; STUPIDITY; Sharron Angle; Terry Jones, Add Tags
Add to My Group(s)
Go To Commenting
The views expressed herein are the sole responsibility of the author and do not necessarily reflect those of this website or its editors.