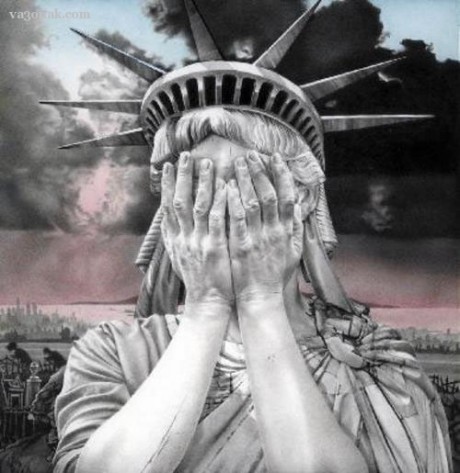 With just a week to go before America's Republican Party makes another fool of itself by forcing shutdown of the U.S. government, the last remaining question about the party of the elephant is: When did the group that uses as its symbol an animal that supposedly never forgets simply forget that stupid mistakes lead to political suicide?

One can argue the pros and cons about Obamacare, talk endlessly about the direction that the nation is going or ponder moving to Australia until the cows come home but the bottom line is the hard political fact that a government shutdown will hurt the GOP more than Democrats or Barack Obama.

Republicans can also pontificate all they want about "doing what's right" or lie about "listening to the people" but in the end the GOP is nothing more than a gaggle of doddering, old white men who serve a limited group of rich, fatcat masters who don't give a damn about the people or the nation that their actions continue to destroy.

Lining up time after time to cast meaningless votes against Obamacare is not the answer to America's woes. Pitiful pronouncements about stale issues like abortion are self-destructive. Preaching about family values while screwing around on your spouse is both hypocritical and hysterical.

The Republican party today is a pathetic display of hyperbole, hypocrisy, hysteria and homophobia.

Speaker of the House John Boehner's meandering failures in leadership and mental laspes are getting harder and harder to hide. He answers not to his constituents or logic but to the hard-core tea party right wing that is led by racists, rabid gay-bashers and bald-faced liars.

At a time when reason is needed in political debate and coalition building is necessary to run a government and deal with America's problems, the Republican Party cannot function because it answers to obstructionists who care more about fringe issues than the real problems facing a nation in trouble.

Yet the Republicans are only part of the problem. In a nation of extremes they are the rapid right, offset unfortunately by the loony left -- the Democrats who also fail to consider the needs of the American people because they listen to political opposites who also see obstruction and obfuscation as more desirable than cooperation and coalitions.

It has long been our belief here at Capitol Hill Blue that the road to oblivion in America is paved with the bad intentions of both Republicans and Democrats. Each answer to controlling forces with personal, power-hungry and self-serving agendas. Each carries politics to the extreme -- albeit in opposite directions. Each serves a small cabal of power brokers with interests that fail to deal with the problems of the American masses.

The blame for the upcoming government shutdown, if it occurs, will lie at the feet of the Republicans but the Democrats will find a way to be responsible for other failures that will hobble America. Both sides approach governing as an absolute right instead of a public service. Both sides see only "their way" as the path to salvation when what America needs is a shared "our way" as a solution that can actually work.

Is either party better for America? In our opinion, no. Both put political agendas ahead of national needs. Both serve money, not people. Both see obstruction as a path when cooperation, consideration and -- yes -- even capitulation is necessary to lead a nation as diverse as America.

Perhaps it is appropriate that America's two reigning political parties use -- as their symbols -- an elephant whose memory is failing and a jackass that bleats and brays and says nothing.

Related Topic(s): Democrats; Political Asylum; Political Nutcase Psychos; Political Values; Political-scare-tactics; Republican, Add Tags
Add to My Group(s)
Go To Commenting
The views expressed herein are the sole responsibility of the author and do not necessarily reflect those of this website or its editors.