Imagine waking up to the shock, the excitement of the new Germany in 1933, when Hitler became chancellor. An earthshaking moment, promising a new Germany, for Germans. Overnight, the new flag is raised everywhere, children don uniforms, fascist supporters face off against the communists and social democrats.

When Trump sailed to victory in November 2017, there was a similar sense of a new US, now led by a populist man-of-the-people, the little guy's hero, fighting the good fight. American for Americans. A paradigm shift.

In both cases, the left was split and unable to fight the right-wing but supposedly populist agenda of the two outsiders. In Germany, the powerful communist party, the KPD, was pushed by Moscow to break with the social democrats, in 1928 considered more dangerous than the fascists. So communist workers were supposed to abandon their unions and form new ones with the correct line. The sensible communists formed a new party. The rest is history. 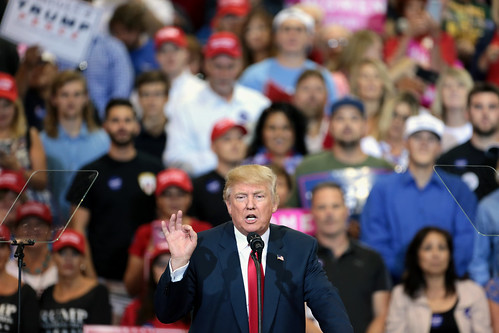 The current opposition to the bad guy Trump is similarly weak and divided, the democrats in shambles, the 'alt-left' scattered and without clear leadership. The political awareness of the 1930s largely gone, with identity politics dominating the news, along with age-old anti-Russian prejudice, leaving real political understanding behind.

This weakness has allowed the US under Trump to morph into a sprawling, zany remix of Hitler Germany circa 1933:
*US politics is so dysfunctional it has elected a dangerous buffoon president.
*The persecution of Muslims has replaced the persecution of Jews.
*'Homeland Security' bars hundreds of thousands of 'aliens' at will and plans are to deport millions of hard-working brown 'illegals' to satisfy white 'Americans'.
*Trump cavalierly tears up treaties (NAFTA, TPP, the Paris Climate Accord), withdraws from UN agencies (UNESCO), as did Hitler by reoccupying the Rhineland, rearming, and spurning the League of Nations.
*Russia is still the mortal enemy of US-style 'freedom' and 'democracy'. Trump wanted a Ribbentrop-Molotov-type pact with Russia, but was stymied by his ruling elite.
*US (really US-Israel) military ambitions are terrifying one and all (literally). No one else wants war and wasteful spending on the military, leaving the field open for one world hegemon.
*Foreign policy consists mainly of attacking dissenter countries to advertize US might and ruthlessness (Syria, North Korea, Cuba). Think: Hitler and republican Spain.
*US-Israel plans are ready to attack the real 'enemy', Islamic Iran, hustling to gather a coalition of the unwilling. Think: Hitler and Austria/ Czechoslovakia, followed by 'full steam ahead' to flatten the Soviet Union.

There is no Mein Kampf Part II, thankfully. There is Trump: The Art of the Deal (1987), and Great Again: How to Fix Our Crippled America (2016), but so far it looks like Trump, apart from a tax cut for the rich, is just barely keeping ahead of his critics, unlike Hitler, who wiped his out. However, there are striking parallels between the two outsiders, who both took the establishment by storm. The most compelling is at least one good Hitlerian idea: create jobs by massive infrastructure projects, though Trump has yet to do anything about it.

The status quo political forces behind Trump are hostile, strong and more entrenched than those Hitler faced as he scrambled to power. Trump's Molotov-Ribbentrop feint quickly collapsed. The current madness accusing Russia of manipulating US elections, threatening his impeachment, astounds any sane person. The hysteria over Crimea and Ukraine is straight out of the Cold War playbook, reaching back to Hitler's ill-fated invasion of the Soviet Union in 1941.

German humiliation was off the charts in the 1920s-'30s, far worse than US humiliation in 1960s-'70s, during and after Vietnam (the only war the US acknowledged losing). Hitler had a firm grip from the start, with Russia and communists enemies numero uno, his free ticket to seizing power.

Trump does not have a firm grip, despite his populist talk of 'making America great again' (i.e., before Vietnam). It is not inconceivable that Trump will be impeached for his dalliance with the bear, or just shear incompetency (25th amendment of the Constitution) though that is a risky strategy. Could US 'democracy' survive another impeachment? It came close to breaking the empire after Nixon.

The US fell into disarray when Nixon was impeached, leading to a weakening of the US ability to subvert/control other countries. The post-Nixon period was a flowering of true democracy for a brief period, with revelations of CIA crimes, an honest effort at detente with the Soviet Union, culminating in the election of the only truly peace-loving president, now a saint, Jimmy Carter.

Carter kept the CIA at bay long enough for successful revolutions in poor Nicaragua and Grenada, but was hoodwinked by his National Security Advisor Brzezinski, and was sucked into Afghanistan to defeat the bear once and for all, supposedly ending the Cold War. Instead, this clever conspiracy morphed into today's apocalyptic world, a kind of replay of the aftermath of WWII, where war brought only more war. Playing with Russia has unpredictable outcomes, mostly bad.

Slayer-of-the-Soviet-dragon Reagan is Trump's model -- massive arms build-up, the big fist wherever needed, even a pretense of making peace with Russia. Reagan had a moribund Soviet leadership and then a preppy Gorbachev, easily hoodwinked. The Soviet Union was weak in the 1980s, and Reagan didn't need much effort (OK, Afghanistan) to topple it, and it looked down for the count, so peace was no problem.

Our era could well be seen as the Reagan-Trump era. The only difference is that Trump is faced with a formidable protagonist, the dynamic, brilliant Putin, whose charisma and charm are his, Trump's, template. Trump craves the popularity of his rival. When your rival is more popular, you want to emulate him. Both Trump and Putin are believers in Sun-Tzu: Keep your friends close, and your enemies closer. But the US political elite didn't like the idea of another Putin, this time in the White House. Where would that leave them? Where would that leave the empire?

US-NATO want to take control of Ukraine and demand that Crimea be part of their Euro club to boot. They want a submissive Russia. Probably Trump couldn't care less. He wants to love Russia (for his own egotistical reasons, or perhaps for a real desire for peace; who knows?), the American elite wants to hate it (for US imperial reasons).

Related Topic(s): America; Democracy; Ecology; Hitler; Homosexuals; Impeached; Nature; Nazis; Neoliberalism; Peace; (more...) Putin; Soldiers; Stalin, Add Tags  (less...)
Add to My Group(s)
Go To Commenting
The views expressed herein are the sole responsibility of the author and do not necessarily reflect those of this website or its editors.