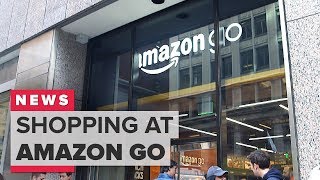 While America was fixated on the most tumultuous midterm election in modern history, Amazon reportedly decided that its much-vaunted "second headquarters" would be split between Long Island City in Queens, and Crystal City, across the Potomac from Washington, D.C.

What does Amazon's decision have to do with America's political tumult? Turns out, quite a lot.

Amazon's main headquarters is in Seattle, one of the bluest cities in the bluest of states. New York and metropolitan Washington are true-blue, too.

Amazon could have decided to locate its second headquarters in, say, Indianapolis, Indiana. Indianapolis vigorously courted the firm. Indianapolis is also a Republican city in a bright red state.

Amazon's decision wasn't based on political partisanship, but it reveals much about the real political and economic divide in America today.

Amazon's business isn't just selling stuff over the Internet. It's getting consumers anything they want, faster and better. To do so, it depends on a continuous flow of great new ideas.

Like the other leading firms of the economy, Amazon needs talented people who interact with each other continuously and directly -- keying off one another's creativity, testing new concepts, quickly discarding those that don't work, and building cumulative knowledge.

Technology isn't a thing. It's a process of group learning. And that learning goes way beyond the confines of any individual company. It happens in geographic clusters, now mostly along the coasts.

As the Times' Emily Badger has reported, the digital economy has been great for places like Seattle, New York, metropolitan Washington, and the other big talent hubs like San Francisco, Boston, and LA. But it's left behind much of the rest of the country.

The result is widening inequalities of place.

For most of the last century, wages in poorer parts of America rose faster than wages in richer places, as inventions were put to work in the hinterlands. After Henry Ford invented the Model T, for example, workers on assembly lines all over the Midwest built it.

Now it's just the opposite. Bright young people from all over America, typically with college degrees, are streaming into the talent hubs of America -- where the sum of their capacities is far greater than they'd be separately.

The invention sparked inside these hubs is delivering streams of new designs and products to the rest of the world -- including to other global hubs.

Related Topic(s): Amazon; American Capitalism; Americans For The Arts; Money, Add Tags
Add to My Group(s)
Go To Commenting
The views expressed herein are the sole responsibility of the author and do not necessarily reflect those of this website or its editors.