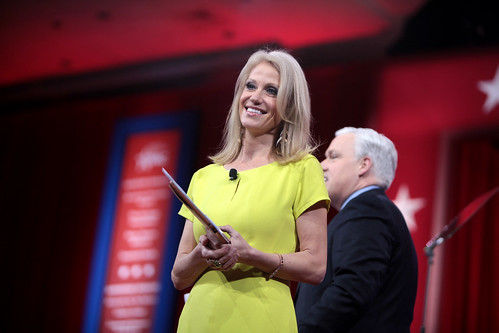 Ms. Kellyanne Conway did us a favor Sunday. During her interview with Chuck Todd, she claimed that the new White House spokesman, Sean Spicer, used "alternative facts." Today, the Main Stream Media is having a field day with that term.

There's a hard lesson here. You're not going to convince someone who believes that what they believe are facts aren't facts.

It's a mistake to think her response was just a master PR spinner, spinning her way out of trouble: She was revealing exactly what's causing the death spiral we're suffering in our inability to have substantive dialog and cooperation between the two political poles.

For instance, Scott Pruitt, this administration's pick for the EPA, is a climate change denier and his alternative facts come from the Bible. In his opinion, God wouldn't let the climate deteriorate enough to harm us.

I prefer to go to climate scientists, 97 percent of whom tell us man-made climate is serious and will work to our detriment and that of our whole ecology.

From what I know about people who use the Bible as their primary source of information to guide their value judgments on everything else, they are not going to change. I happen to believe, while the Bible may or may not give us moral grounding, it has no validity on issues of science. So, any argument I advance from my knowledge sources would be met with arguments from their knowledge sources. Neither of us considers the other's knowledge source valid, so we are in a stalemate.

Expand this issue to the entire country, and one can see how we are split and why we continue down the trajectory to separate echo chambers.

During the last several years we have been traveling this road to perdition. This road being the road to different information sources to justify our opinions. So much so that we've arrived at a point where we've diminished the value of facts in favor of strongly held opinions.

It doesn't take much discernment to figure this out. Just tune into right and left wing media sources to see the raw data being spun in different directions. A good example is the recent Woman's March. For the left: A great solidarity event. For the right: A waste of time.

So, which are the alternative facts? Being one of the marchers, I claim it's the right who are using alternative facts. Here's the rub: if I say the right has no basis in reality for their claims, I'm wrong. It's a different reality created by an emphasis on different sources of knowledge.

The next four years will be difficult, but I don't think we can weaken now. Our only tool to combat the alternative facts coming from the right is to acknowledge that they are facts from different information sources.

It boils down to acknowledging that we are using different epistemological sources to validate our points of view. And any chance for reconciliation requires that this conversation happens first. Otherwise, there is no bridge to reconciliation, and the die is cast.

And then there's Betty de Vos for Education, Rick Perry for Energy, Jeff Sessions for Attorney General, and Rex Tillerson for State. What information sources will they go to for their justifications and rationale?

This issue is the key to the election of the current man in the White House. The Democratic party didn't believe the issues felt by the rural voters were factual. Have we learned anything? Time will tell.

Related Topic(s): Alternative; Alternative Facts; Democratic; Election; Information; Judgment; March; Real Democracy; Scientists, Add Tags
Add to My Group(s)
Go To Commenting
The views expressed herein are the sole responsibility of the author and do not necessarily reflect those of this website or its editors.