"On Bullshit" (2005), by philosopher Harry G. Frankfurt, is an essay that presents a theory of bullshit that defines the concept and analyzes the applications of bullshit in the contexts of communication. Frankfurt determines that the bullshit is speech intended to persuade (a.k.a. rhetoric), without regard for truth. The liar cares about the truth and attempts to hide it; the bullshitter doesn't care if what they say is true or false, but rather only cares whether or not their listener is persuaded." Wikipedia

My thesis is that the claim that alternative facts are real facts is bullshit, using epistemology as a mask for a defense of deceit.

Whether the global temperature is rising is not a question of faith or epistemology but of evidence. Alternative facts are not real facts but lies.

Faith is based on believing the absurd; science and logic are based on measurement and verification. Faith does not lead to knowledge but to belief.

"Tertullian's work De Carne Christi (ca. 203-206)stated "prorsus credibile est, quia ineptum est", which can be translated: "it is by all means to be believed, because it is absurd". 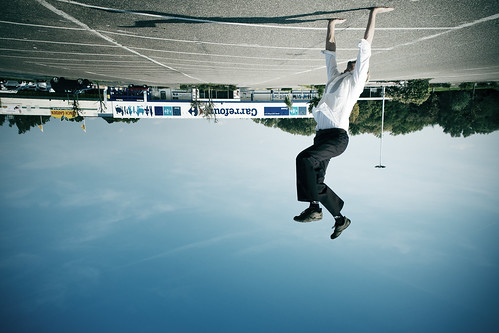 Kierkegaard echoed this assertion in stating "I believe by virtue of the absurd."

In other words, if something can be measured and verified, we do not need to believe it; we can know it. I can know the temperature by measuring and verifying it.

Belief is required to accept as true something which cannot be empirically verified. It has nothing to do with knowledge. It has to do with conviction. I person can have a strong conviction that the earth is flat. That does not make it a fact. Whether you believe it or not, a fact is a fact....and as such is the only basis for agreement. We can disagree about whether X is a fact, but we cannot disagree about whether a fact is true or not: facts are proven truths, observed, verified, replicated. You can believe whatever you wish or are persuaded; you cannot have your own set of facts..for facts are both universal and impersonal.

The end result of this distinction is critical. Remembering that religion has started many wars, supported most, and stopped none, we can understand why Voltaire said: 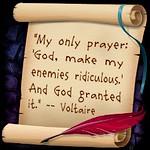 We might quote our own Enlightenment genius, Thomas Jefferson from his Notes on the State of Virginia:

"Difference of opinion is advantageous in religion. The several sects perform the office of a Censor morum over each other. Is uniformity attainable? Millions of innocent men, women and children, since the introduction of Christianity, have been burnt, tortured, fined, imprisoned: yet we have not advanced one inch towards uniformity. What has been the effect of coercion? To make one half the world fools, and the other half hypocrites. To support roguery and error all over the earth."

Related Topic(s): Alternative Facts; Belief; Evil; Faith; Freedom; History; Hitler; Lennon; Lies; Lies Liars; (more...) Propaganda; Religion; Revolt; Truth, Add Tags  (less...)
Add to My Group(s)
Go To Commenting
The views expressed herein are the sole responsibility of the author and do not necessarily reflect those of this website or its editors.