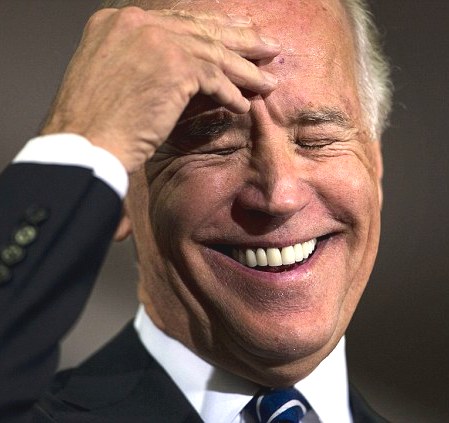 (Image by John Rachel, A Blog Site)   Details   DMCA
I used to be enamored with Joe Biden.

But what a tool he has turned into.

What a dancing puppet for the oligarchy.

Is it something in the water? Or is it like Stephen Marks says in his eye-opening book Confessions of a Political Hitman, when you get to that position of power, they take you in the back room and give you "the talk". They explain how things actually work, how things are done, and who is actually running the show. They give you the choice: gold or lead.

Kennedy made the wrong choice.

Clinton went for the gold and has been richly rewarded. Likewise with Obama. $400,000 for a single speech to his Wall Street puppet masters? Gimme a break. That's serious cash!

At the same time, I don't entirely dismiss it.

Something gets to these guys. Something burrows into their brains like those amoeba that make a pinhole in your skull, climb inside and eat your brains.

Some criticize Vice-President Biden for his gaffs. Frankly, his gaffs are trivial compared to the actual stands he has taken over the years on a wide variety of issues.

Just a few revealing examples: He is implicated in the ongoing attempts by the U.S. to overthrow the democratically-elected leaders of Venezuela, the late Hugo Chavez and the current president, Nicholas Marduro. Similarly, he has been an outspoken supporter of the chocolate king Petro Poroshenko, current president of Ukraine, installed by violent coupe in a U.S.-sponsored subversion of democracy in that fragile and volatile part of the world. Mr. Biden has been a huge advocate for the unnecessary and provocative sanctions against Russia, just a few days ago ridiculing the EU countries who won't go along with America's imperial madness. We also find out that Biden's support for the takeover of Ukraine goes beyond America's alleged geopolitical agenda there. In fact, his son Hunter Biden, has been appointed to the Board of Directors of Burisma Holdings, a private oil and gas company in Ukraine, which stands to profit handsomely from the privatization and plunder of the country's natural resources.

That Vice-President Biden has been a prominent voice for America's propaganda and saber-rattling against Russia goes without saying.

I admit that my first impressions of Mr. Biden were just that impressions so all of my positive feelings were very superficial. I saw him speak at campaign rallies and other public events, as well as appear in several debates. I loved the guy's punchy directness, his ability to dissemble convoluted arguments and spurious propositions with a just few well chosen, often funny phrases. I found his wide, confident grin engaging. Overall, he created in me the impression he was his own man, an independent thinker, more concerned with the truth and cutting through the bullshit than worried about winning popularity contests. I've so had it with oratorical grandstanding and highly crafted, high-sounding but usually empty political bombast, a little in-your-face straight-talk went a long way.

Obviously, by now I should know better than to take any of these politicos at their word. How many times does a dog have to get beaten to realize his owner is an irredeemably cruel sadist? And Biden did partner with the man with a Muslim name who, despite his wonderful rhetoric about practically everything decent human beings would like to see happening in our troubled country and world, ultimately proved determined to do the very opposite.

But I'm such a soft touch, even now after decades of being bludgeoned with the hypocrisy stick. I had heard about Biden's loss of his first wife and their new 18-month old daughter, how he courageously bore his grief, bounced back, continued his selfless service to public life all the usual milk toast mythology that's surrounds public officials.