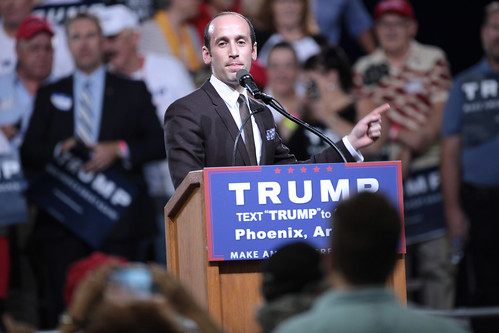 515 days into Trump's presidency, three things are clear: Donald's signature issue is division; he always plays to his base; and his primary issue is immigration. Trump promised his base a wall along the southern border and he's willing to do anything to accomplish this. His most recent tactic is to generate outrage by separating immigrant families at the border. The architect of this tactic is Stephen Miller.

In his ongoing effort to solidify and energize his base, Trump has pursued a consistent set of campaign issues: immigration; trade; taxes; and energy. Trump's most significant failure has been his inability to secure funding for his border wall.

Trump has had a couple of opportunities to get funds. In September, Donald announced an initiative to phase out the Deferred Action for Childhood Arrivals (DACA) act. In January, in an effort to save this program, Democrats offered Trump money for his wall in return for protection of the DACA recipients; Trump initially agreed but then backed off, seeking additional immigration constraints. In May, Trump threatened to veto the $1.3 trillion spending bill, unless there was full wall funding; then he relented and signed the bill citing "national security."

Meanwhile, Trump's base has gotten restless. One of his most notorious supporters, Ann Coulter, has mocked Donald for failing to deliver on his border-wall promise ( http://thehill.com/blogs/blog-briefing-room/news/380612-ann-coulter-trump-is-a-shallow-lazy-ignoramus). Despite Administration efforts, illegal border immigration increased in May. (https://www.nbcnews.com/news/us-news/despite-trump-admin-crackdown-illegal-immigration-border-increased-may-n880686 ) Trump seized on the tactic of separating immigrant families at the border in order to outrage Democrats and, in effect, blackmail them into providing funds for his wall.

This is also an effort to galvanize Trump's base before the 2018 midterm elections. Trump had planned to excite them with tax cuts but this hasn't worked -- the base has figured out that the Trump tax cuts don't help them.

Stephen Miller is the architect of the tactic of separating immigrant families at the border. (Miller was also the architect of Trump's January 2017 executive order restricting immigration from seven predominantly Muslim countries.) The 32-year-old Miller has several White House jobs: he advises Trump on domestic policy, particularly immigration and trade; he helps write Donald's speeches; and when Trump hits the campaign trail, Miller goes with him as an opening act -- he fires up the base with an incendiary monologue.

Miller has an interesting history. He was born into a liberal Jewish family in Santa Monica, California. As a teenager, Stephen took a hard-right turn and developed a reputation as a "troll" at Santa Monica High School and Duke University. (In this context, a "troll" is someone who deliberately sows discord by making inflammatory comments.)

In May, Atlantic staff writer McKay Coppins wrote an excellent profile of Stephen Miller ( https://www.theatlantic.com/politics/archive/2018/05/stephen-miller-trump-adviser/561317/). Coppins observed that when Trump announced his presidential candidacy, Miller realized: "the New York billionaire was the flesh-and-blood manifestation of everything he cared about most: an opponent of political correctness, a hard-liner on immigration, and enemy of the political establishment -- and a world-class troll."

Coppins noted: "People who have known [Miller] at different points in his life say his political worldview is also rooted in a deep-seated instinct for trolling. Miller represents a rising generation of conservatives for whom 'melting the snowflakes' and 'triggering the libs' are first principles."

Stephen Miller is Trump's closest adviser who is not a member of Donald's family. (Miller serves in a White House position that is roughly equivalent to that of Valerie Jarrett in the Obama administration.) There are those that say Miller's function is to articulate Trump's impulses.

Reading McKay Coppins article about Miller and a companion piece in Alternet by Kali Holloway (https://www.alternet.org/here-are-21-facts-explain-who-trump-aide-stephen-miller?src=newsletter1093438 ) four characteristics jump out. The first is that Miller is an unabashed racist. A high-school classmate remembered that Miller had, "an intense hatred toward people of color, especially toward Latinos."

To say the least, Stephen Miller is strident. A Duke University official remembered Miller: "He's the most sanctimonious student I think I ever encountered. He seemed to be absolutely sure of his own views and the correctness of them, and seemed to assume that if you were in disagreement with him, there was something malevolent or stupid about your thinking. Incredibly intolerant."

Miller is mini-Trump. On the campaign trail he typically warms up audiences by railing against immigration: "Uncontrolled migration from the Middle East....illegal immigrants being arrested... for the most heinous crimes imaginable... Low-wage foreign workers being brought in to take your place at less pay."

Finally, Miller is Trump's enforcer on immigration. Miller is the architect of both of Trump's signature immigration actions: restricting immigration from seven predominantly Muslim countries and separating immigrant families at the border. (Since 2013 he's led the opposition to common-sense immigration reform; in January, Miller convinced Trump to renege on a DACA deal.)

One of the notable similarities between Trump's signature immigration actions (restricting immigration from seven predominantly Muslim countries and separating immigrant families at the border) is how sloppy the implementation was. For example, there's every indication that when immigrant parents are separated from their children, the government is not taking steps to ensure they can be reconciled later. This appears to be intentional.

Stephen Miller and Donald Trump are not motivated by civility or legality. They want to generate outrage; foment division.

Bob Burnett is a Berkeley writer. In a previous life he was one of the executive founders of Cisco Systems.
Related Topic(s): Conservatives; Daca; Democrats; Donald Trump; Donald Trump Lies; Donald Trump Racist; Donald Trump Versus The Constitution; Hatred; Immigrants; Immigration; (more...) Presidency; Stephen Miller, Add Tags  (less...)
Add to My Group(s)
Go To Commenting
The views expressed herein are the sole responsibility of the author and do not necessarily reflect those of this website or its editors.