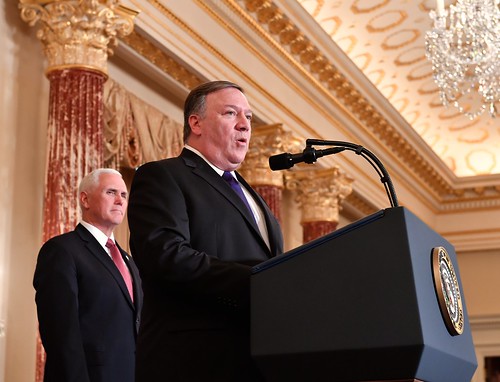 Unlike many of those in the Trump inner circle, Pompeo had an impressive career before entering politics. After graduating from West Point -- number one in his class -- Pompeo served five years in the Army. Then he went to Harvard Law School and briefly worked for a Washington law firm. In 1996, he moved to Wichita, Kansas, and helped form Thayer Aerospace -- with funding from the Koch brothers. In 2006, he was elected to the House of Representatives -- once again with help from the Koch brothers.

In Congress, Pompeo aligned with conservative Republicans such as the Tea Party and the Congressional Constitution Caucus. He's socially conservative, a climate change denier, and, as a member of the House Select Committee on Benghazi, an ardent critic of Hillary Clinton.

After Trump fired his first Secretary of State, Rex Tillerson, he nominated Pompeo for the position. Pompeo was confirmed on April 26, 2018. By most accounts, Pompeo has been more effective than Tillerson. State Department moral appears to be improving. (http://foreignpolicy.com/2018/05/15/pompeo-lifts-hiring-freeze-on-state-department-diplomacy-tillerson-restore-diplomats-swagger-tackle-low-morale/ )

At the moment, Mike Pompeo probably has more influence on Donald Trump's foreign-policy actions than does anyone else in the Administration. In most regards, Pompeo's stated beliefs align with Trump's.

North Korea: Pompeo has been Trump's point man on negotiations with North Korea -- Trump sent Pompeo to negotiate with Kim Jong-un before Pompeo was confirmed as Secretary of State.

In these negotiations, the key issue is "denuclearization." On May 13th, National Security Adviser Bolton offered a very specific definition of what North Korean "denuclearization" meant: "getting rid of all the nuclear weapons... taking them to Oakridge, Tennessee... getting rid of the uranium enrichment and plutonium reprocessing capabilities." Bolton said the process should follow "the Libya model."

North Korea was offended by Bolton's remarks and denounced him. Apparently, Kim Jong-un is looking for a "phased and synchronous" approach to denuclearization; that is, a step-by-step approach whereby they gradually denuclearize while receiving commensurate economic assistance. Nonetheless, Pompeo seems to be aligned with Bolton, telling the Senate Foreign Services Committee that the U.S. wants "rapid denuclearization, total and complete, that won't be extended over time."

At this writing, Pompeo is meeting with North Korean representatives. He says the negotiations are "making progress" but does not know if a June 12th meeting between Trump and Kim Jong-un will occur.

Iran: Pompeo has long been opposed to the Iran nuclear agreement --technically the "Joint Plan of Action" (JPA) signed November 24, 2013 . As a Congressman, Pompeo said, "I look forward to rolling back this disastrous deal with the world's largest state sponsor of terrorism." On May 8th, Trump declared he was withdrawing the United States from the JPA.

Trump wants to negotiate a new JPA that specifically limits Iranian missile testing, gives inspectors unfettered access to Iranian military bases, and extends the (old) JPA's expiration date beyond 2030. It's unlikely that either Pompeo or Trump can gain the support of the other signatories: China, England, European Union, France, Germany, Iran, and Russia.

Russia: To say the least, Trump's attitude towards Russia has been inconsistent. On the one hand he called Putin to congratulate him after he was "reelected" Russian president. On the other hand, he's claimed, "nobody has been tougher on Russia than I have."

In contrast, Pompeo is more hawkish. During his Secretary-of-State confirmation hearing, Pompeo said: "[Russia] has reasserted itself aggressively, invading and occupying Ukraine, threatening Europe, and doing nearly nothing to aid in the destruction and defeat of ISIS."

China: To a lesser extent, Trump's attitude toward China has also been inconsistent. Pompeo is a China hawk. In January, Pompeo told the BBC that China is as big a threat to U.S. Security as Russia is, citing efforts by the Chinese to steal American commercial information.