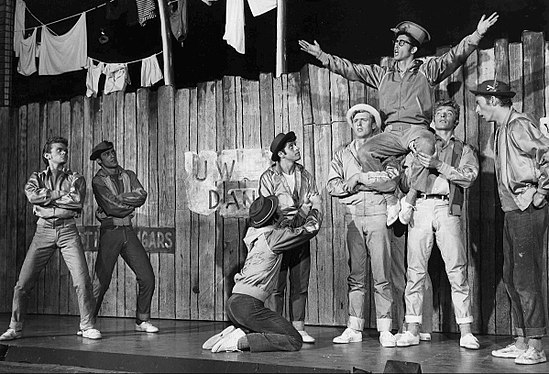 Memorials to Stephen Sondheim didn't have to search far to find parallels between the musical West Side Story and a United States disunited by class and ethnic strife in 2021. Sondheim's lyrics "Everywhere Grime in America, Terrible Time in America" became Jacobin's headline for an anniversary retrospective on the 1961 film version two weeks before his passing on November 26.

Meanwhile, current-year academic contentions that "white identity is intrinsic to Western ideas about liberty" may as well have borrowed the couplet "Life is all right in America/if you're all-white in America."

Less fashionable are sentiments celebrating the right to be "free to be anything you choose" nearly two decades before Milton Friedman popularized a shorter version of the phrase. In contrast to the rejoinder that this meant a mere freedom "to wait tables and shine shoes," Friedman documented how economic restraints, rather than their absence, trapped workers in low-paying jobs and kept goods out of reach of consumers.

Sondheim's paeans to expanded personal options were likewise echoed at the end of the 1960s in Karl Hess's "libertarian insistence that men be free to spin cables of steel, as well as dreams of smoke." Hess noted the emerging libertarian movement's break with "patriots who sing of freedom but also shout of banners and boundaries." West Side Story's wayward youth, faced with prejudice and legal harassment, refuse to be barred from the "sweet land of liberty" of another song named "America."

Esquire's critic Dwight Macdonald saw West Side Story as replacing a "lively and disrespectful" musical style with a "schmaltzy" one at odds with urban grit. Ironically, the same Macdonald championed the cultural ferment of city-states "riven by faction, stormy with passionate antagonisms" squelched by the "uniformity and agreement" needed for "that achievement of power over other countries that is the great aim of modern statecraft." As Hess observed in writings like Neighborhood Power, the decentralization of politics to the smallest possible scale need not result in social devolution. Freedom of choice has enough room for all of us.

Writer of political commentary for venues such as the Center for a Stateless Society.
Related Topic(s): Americana; Americans Together; Free Market; Freedom Of Expression; Freedoms, Add Tags
Add to My Group(s)
Go To Commenting
The views expressed herein are the sole responsibility of the author and do not necessarily reflect those of this website or its editors.